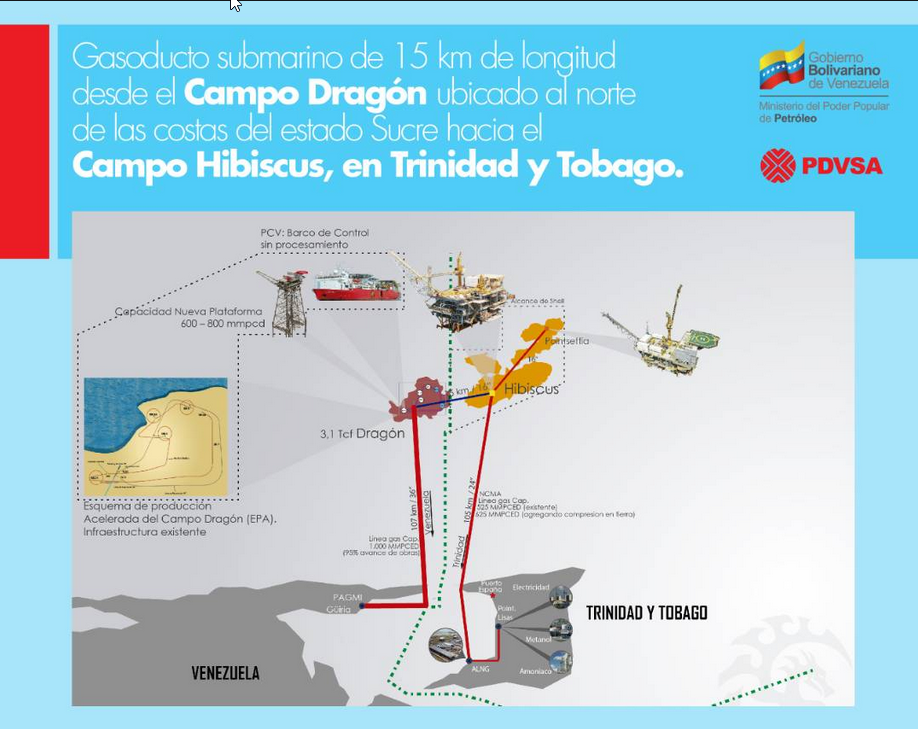 (Reuters, 24.Jan.2023) — The U.S. Treasury Department has granted a license to Trinidad and Tobago to develop a major gas field located in Venezuelan territorial waters, a senior Biden administration official said on Tuesday, marking a further easing of some sanctions on Venezuela.

Speaking to Reuters on condition of anonymity, the senior official said that “the Maduro regime will not be permitted to receive any cash payments from this project” and that all remaining U.S. sanctions would remain unchanged and still be enforced.

“This decision is the result of extensive diplomacy between Vice President Kamala Harris and Caribbean leaders, who have made it clear that granting this specific license would help ensure their energy security and decrease the region’s reliance on energy resources from other countries, including Russia,” the official said.

PDVSA has found reserves of 4.2 trillion cubic feet (Tcf) in the Dragon field, on the Venezuelan side of its maritime border with Trinidad. The project was headed for production over a decade ago, but stalled over lack of capital and partners, as well as sanctions.

Under U.S. sanctions, companies and governments must obtain authorization from the U.S. Treasury Department to do business with PDVSA. President Joe Biden’s administration has granted only a few such licenses since taking office in January 2021.

The latest move follows a round of negotiations in November between Maduro’s Socialist government and the opposition, aimed at finding a path to new elections. But Maduro has resisted sending his negotiating team back to the table since then.

Even with Washington’s granting of Trinidad’s request, it could take years of investment and development to bring Venezuelan gas to Trinidad and boost LNG to Europe, experts say.

In addition, with no payments authorized to Venezuela, it could be difficult for Trinidad to craft a deal with Caracas.

“At the request of the Government of Trinidad and Tobago, the United States Department of the Treasury issued a specific license to enable Trinidad and Tobago to develop the Dragon gas field,” the senior administration official said.

But, the official added, “the United States’ policy towards Venezuela has not changed, and we continue to enforce sanctions and restrictions that remain in place.”

In November the United States issued a six-month license to Chevron, authorizing it to take an expanded role at four Venezuelan joint ventures that produce, process and export oil, and to bring their oil to the United States.

The Chevron license is meant to reopen some oil flows that were shut by U.S. sanctions nearly four years ago. The license was one of Washington’s first significant steps to ease sanctions as an incentive for Caracas to work with opposition leaders on a presidential election in late 2023.