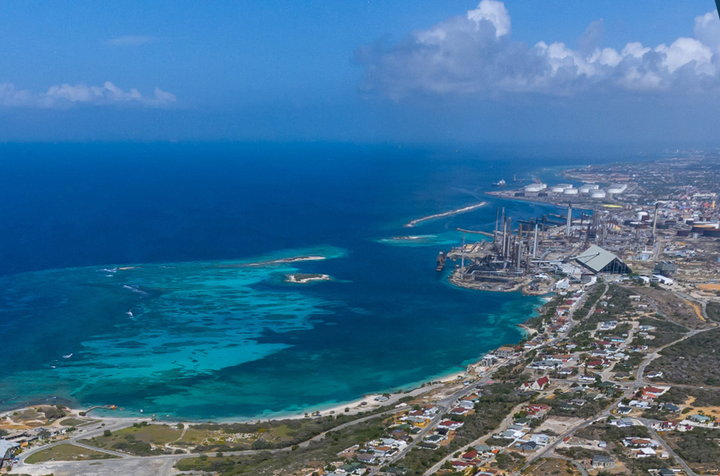 (Argus, 13.Jan.2020 — Citgo, the US refiner that Venezuela’s political opposition nominally wrested from the Opec country’s national oil company PdV in 2019, is abandoning a refinery project in Aruba, sparking fury on the Dutch-controlled island.

In a 27 December letter obtained by Argus, Citgo Aruba Refining (CAR) told workers that US sanctions on PdV imposed in January 2019 “have impacted not only the CAR refurbishment/upgrader project but also resulted in severe financial hardship restricting the ability to continue support of day-to-day operations.” As a result, the company will cease operations and terminate its working agreements as of 30 January 2020, the letter states.

Aruba, a tiny island that once formed part of PdV’s strategic logistical network in the Dutch Caribbean, is crying foul.

CAR, a subsidiary of Delaware-based Citgo Aruba Holding (CAH) and an indirect subsidiary of Delaware-based PdV Holding (PDVH), has missed lease payments on the refinery and associated oil terminal since March 2019, taxes have not been paid since 2017, refinery maintenance has been neglected, and now the company is shirking its labor obligations, a senior official close to the Aruban government tells Argus. “This is a horrible abuse,” the official said.

None of some 70 local workers affiliated with two unions have signed the proposed severance package, union leaders say. The Aruba Labor Federation (FTA) is reaching out to Citgo chairman Luisa Palacios today to insist on payment of labor debts and sustained employment at the terminal, which it says continues to operate. The independent oil workers’ union, IOWA, plans to take Citgo Aruba to court under Dutch jurisdiction.

The terminal, where CAR imports fuel for the minuscule local market, is of particular local concern if the company is allowed to leave Aruba at the end of this month.

The Aruban government has tried since last year to repossess the refinery and terminal under a proposed temporary suspension agreement between Aruba-owned local refinery owner RDA and CAR. But the two sides failed to strike a deal, and CAR has impeded RDA from accessing the facilities. Citgo has not responded to a request for comment. CAR’s top executive Joe Crawford could not be reached.

The government says it has not been formally apprised of CAR’s decision to withdraw, but it is demanding that the company comply with all labor obligations.

The dispute opens a thorny new legal front for Venezuelan opposition leader Juan Guaido, who is recognized by dozens of Western countries, including the Netherlands, as interim Venezuelan president in place of Nicolas Maduro. Despite US sanctions that the White House augmented today with targeted penalties on Guaido’s National Assembly rival Luis Parra and his allies, the Maduro government has not fallen.

In the heady weeks after the White House recognized Guaido’s interim government in January 2019, Citgo’s board shifted into opposition hands, giving Guaido’s parallel government administrative control over 750,000 b/d of US refining capacity but without direct access to the refiner’s revenue.

Under a vaunted US-backed administrative structure meant to underpin a future political transition, Citgo is now governed by an “ad hoc” PdV board in exile headed by veteran PdV executive Luis Pacheco. The main task of the ad hoc PdV board is shielding Citgo, Venezuela’s most valuable overseas asset, from myriad creditors, including jilted PdV bondholders and arbitration claimants that are pressing their cases in US courts.

Now the Guaido-appointed board is facing a separate conflict in Aruba, where it reluctantly inherited a project that it would have quietly preferred to leave in Maduro’s hands. “It would be nice to have this asset, but it is not one of our priorities,” a member of the ad hoc PdV structure tells Argus, blaming scarce resources.

One of the Aruban union leaders laments that Guaido is not helping the workers even though they helped to eject Maduro’s CAR managers.

“We got Maduro’s people out with the hope that Juan Guaido would help us,” the union boss said.

Under a long-term lease signed in 2016, CAR was supposed to refurbish the 235,000 b/d San Nicolas refinery that was previously owned and operated by US refiner Valero. The ambitious $600mn-$700mn project would have included a 110km subsea natural gas pipeline from Venezuela’s Tiguadare gas treatment facility to run the complex that includes its two cokers. Under that agreement, around 209,000 b/d of diluted crude oil (DCO) from Venezuela’s Orinoco heavy oil belt would have been upgraded into 125,000 b/d of 22.5°API synthetic crude with 1.2pc-1.5pc sulfur. The stripped-out naphtha would have been recycled back to Venezuela, with the sulfur and coke sold.

Venezuela’s Crisis: This Is Not About Politics Or Oil