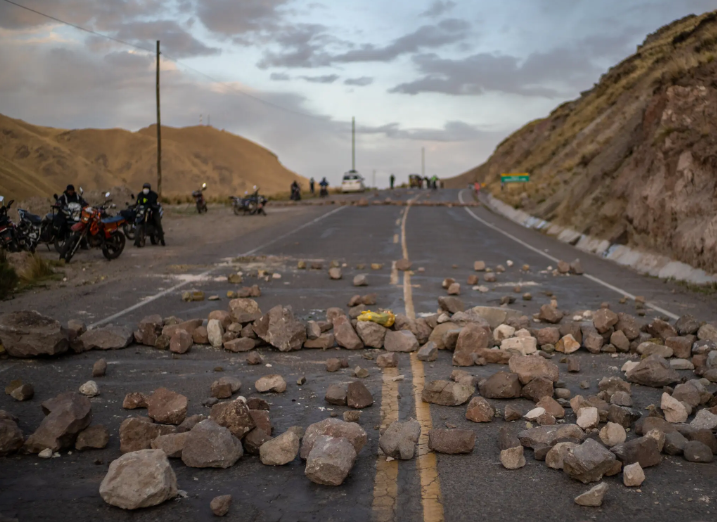 (The New York Times, 22.Jan.2023) — President Pedro Castillo borrowed from history when he attempted a coup in Peru.

Thirty years ago, another president asserted authoritarian control. But this time, there was a critical difference: As president, Castillo had no support for his coup. The military and the judiciary quickly rejected his attempt last month.

Castillo’s dramatic fall from power shook Peru, a country of 33 million people that is the fifth-most populous in Latin America. His supporters have protested across the country and at least 55 people have been killed, often in clashes with security forces.

I spoke with Julie Turkewitz, The Times’s Andes bureau chief, about what she has seen reporting on the demonstrations and what the unrest reveals about democracy in South America.

Lauren: One newsletter described Castillo’s ouster this way: “He had breakfast as a president, lunch as a dictator, dinner as a detainee.” Tell me the story of his failed coup.

Julie: Castillo was a leftist from a poor, rural farming background. He was the surprise winner of the 2021 presidential election. A year later he was struggling to govern. In a shocking move, he announced on national television that he was dissolving Congress and that he would create a government that would rule by decree. This was widely seen as an illegal power grab. He was, in a matter of hours, impeached, arrested and taken to a detention center. His vice president was sworn in to replace him.

How did Peruvians respond?

Many of Castillo’s supporters are poor or middle class Indigenous people, part of the roughly two-thirds of the country’s population living outside of the capital, Lima. As a colleague of mine put it, many feel politically excluded while also feeling tokenized by Peru’s tourism industry. When news reached his supporters in rural areas, they were angry he had been removed from office. Castillo was their hope for change.

So tens of thousands of protesters took to the streets in an effort to shut down the country, what they felt was their only way to be heard. People started blocking the highways with broken glass, boulders or burning tires. There are now protests or blockades in about 40 percent of Peru’s provinces.

While some people living in urban areas dismissed these demonstrators as extremists, at least one trusted poll shows a majority of Peruvians support the protests.

What has the government done to address this unrest?

The new president, Dina Boluarte, called a national state of emergency, an exceptional measure limiting guarantees to certain civil rights. The protests only got bigger and more violent. The police and military were sent to try to restore order in rural areas, and they responded at times with extraordinary violence. Security forces shot some in the chest, back and head.

You went to Juliaca, a southern city where 19 people were killed on Jan. 9. How did you get there if the protesters shut down highways and immobilized the country?

My colleagues and I persuaded protesters to let us through roadblocks by carrying printed copies of our previous stories, often talking with demonstrators for hours. It was night when we finally arrived to Juliaca after nine hours of driving. The street was blocked with part of a rusted amusement-park ride, chicken wire and small fires. It really felt like we’d arrived at the end of times.

What did you find in the morning?

We woke up in the Andes at nearly 13,000 feet above sea level. Juliaca is a city of extremes: The sun feels closer, harsher. The wind is cutting, dusty and cold. One of the first things that we saw when we left the hotel was a spontaneous march happening in the streets.

There were young people in skinny jeans and older women in traditional skirts, braids and hats. Together, they blamed the new president for the protesters’ deaths and said, “This democracy is no longer a democracy.”

What did you learn from speaking with protesters?

Being there helped me understand why people feel the Peruvian democracy is not working for them. People feel the system is rigged against them. And on the ground, I could really see why they believed that.

What did you see?

We found one example when we went to a public hospital and spoke to many people who had suffered gunshot wounds in the city’s deadly protest. Human rights groups have accused police of shooting directly at demonstrators. The wounded had not been given their medical reports, even though that was their right. Several people said they believed that they were being punished for their association with the demonstrations.

At the hospital, patients lacked access to basic services. They pay for their own water and there is no toilet paper or soap in many hospital bathrooms. The hospital director, appointed by the government, said, basically, everything is fine here. He didn’t tell me that the victims needed more help. This idea that people feel forgotten by Peruvian democracy was visible in the hospital.

Are there similarities between this unrest and other protests across the continent?

That disaffection is a problem we’re seeing across South America, including in Chile, Colombia and Brazil. What is distinct about this unrest compared with Brazil’s riots is that misinformation fueled the storming of Brazil’s capital. The overarching story in Peru is more about decades of frustration over poverty, inequality and dysfunction.

You have written that these protests are a referendum on Peru’s democracy. How so?

Just 21 percent of people in Peru are satisfied with their democracy, according to a Vanderbilt University survey. The path forward isn’t clear. I spoke with one of the world’s leading democracy experts, Steve Levitsky. He says you need two things for democracy to die: First, you need a widespread belief that the democracy isn’t working for most people. Peru has that. But the other thing you need is a viable alternative. And a viable alternative just doesn’t exist right now.

More about Julie: Based in Bogotá, she covers Colombia, Venezuela, Peru, Ecuador and Bolivia. Before moving to South America, she covered the U.S. West.