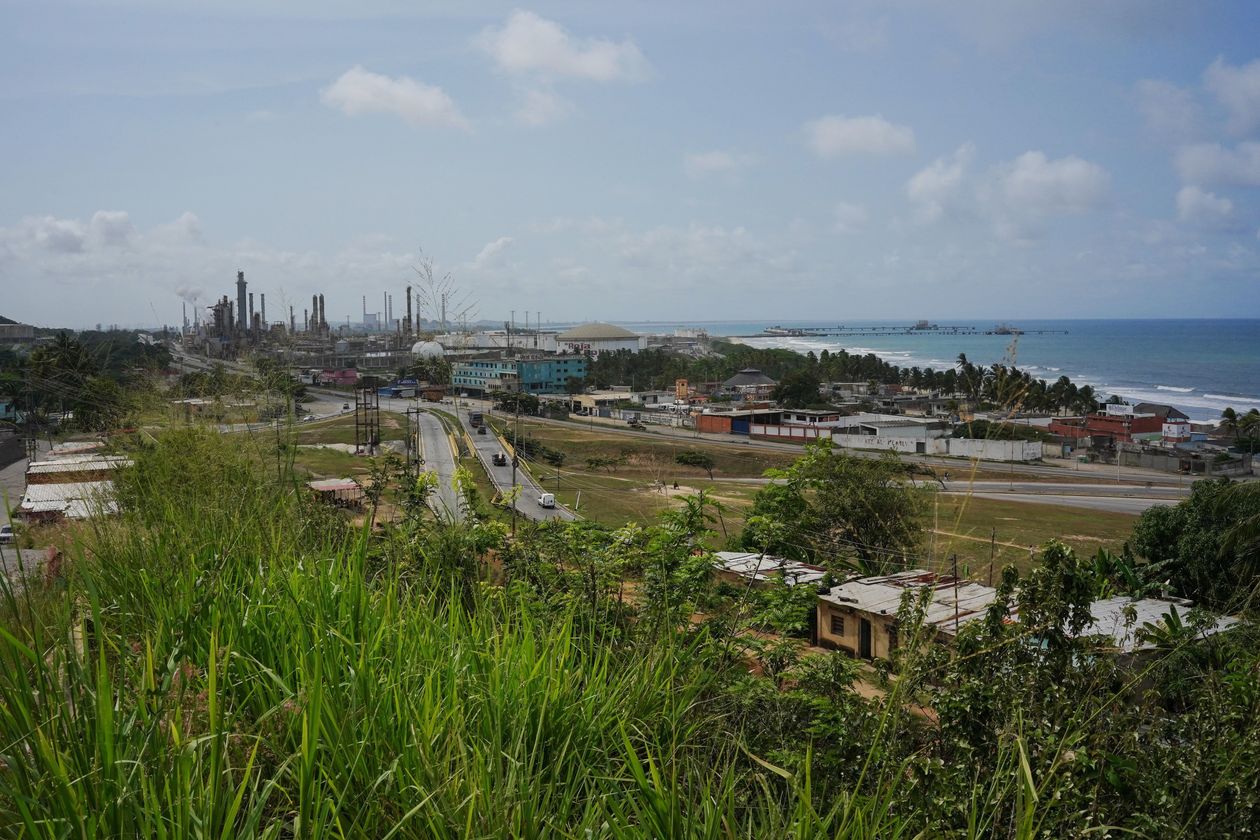 (WSJ, 22.Mar.2022) — For months, Biden administration officials snubbed top executives and lobbyists for Chevron Corp. who had pressed officials in Washington to ease sanctions so the company could boost production in Venezuela, where the U.S. has banned such activities since 2019.

Then Vladimir Putin launched his invasion of Ukraine.

Now the Biden administration is listening closely to Chevron, say people familiar with the conversations, which says it can help double Venezuela’s 800,000 barrels-a-day production within months. That could replace the loss of roughly 700,000 barrels a day the U.S. was importing from Russia before it attacked Ukraine. And it could help lower gasoline prices—a major concern for the Biden administration in a tough election year.

“Chevron came in November, they pitched it around, but got laughed out of town,” said Juan Cruz, a former National Security Council official in charge of the Western Hemisphere who has closely followed the Biden administration’s policy toward Venezuela. “But what was really funny in November is a plan today.”

Since the Russians invaded on Feb. 24 and President Biden has canceled Russian oil imports, Chevron Chief Executive Officer Mike Wirth has offered the company’s help to Secretary of Energy Jennifer Granholm in shoring up U.S. energy supplies by ramping up production in Venezuela, according to people briefed on the talks. Chevron is the only major U.S. producer to retain assets in Venezuela following nationalizations by the Socialist government and, much later, U.S. sanctions.

Granting the San Ramon, California-based company and other U.S. producers permits to operate could boost Venezuelan production while keeping other sanctions in effect. Broadly easing sanctions on Venezuela faces stiff opposition in the U.S. over concerns it would prop up the country’s autocratic regime. U.S. officials are divided over the issue, say people familiar with the situation.

Asked recently by CNN about the outreach to Venezuela and Saudi Arabia for more oil, Ms. Granholm, said, “I think Americans should see the administration calling right now for an increase in supply as something that helps them,” naming the benefit of reducing costs at the pump.

Another person who spoke with senior Venezuelan officials after the invasion was Ali Moshiri, a charismatic Iranian-American who had headed Chevron’s Latin America division and was considered a “dear friend” by the late Hugo Chávez, the founder of the political movement now led by Mr. Maduro, with whom Mr. Moshiri also has close a close relationship. Mr. Moshiri retired from Chevron in 2017 but now consults for the company in Venezuela, where he has deep ties with senior officials, say people familiar with the matter.

Many oil industry executives say that Mr. Moshiri was essential to Chevron’s controversial decision to stay in the country even as other Western oil companies exited after the Venezuelan government in 2007 nationalized billions of dollars of assets owned by ConocoPhillips, Exxon Mobil Corp. and others. He has also lobbied Biden officials to loosen sanctions on Venezuela, where Chevron has operated for nearly a century.

“You cannot ignore Venezuela,” Mr. Moshiri said in an interview last week. “Venezuela will always be part of our energy security.”

People briefed on the talks say Mr. Moshiri has argued to U.S. officials that the U.S. can’t cede influence of Venezuelan energy to rivals like China and Russia, which have increased their activities in the country in recent years. He has also spoken with Venezuelan officials for months to try to win the release of Americans imprisoned in Venezuela, these people said.

A Chevron spokesman said Mr. Moshiri isn’t representing the company in negotiations with the U.S. or with Venezuelan officials. Mr. Moshiri declined to provide details about his contract with Chevron. After leaving Chevron, he founded a firm, Amos Global Energy, which seeks investment opportunities in Venezuela, people familiar with the matter said.

A few days after the March 5 meeting in Caracas with U.S. officials, the Maduro government freed two American captives, one of them an executive of Citgo, the U.S. refining subsidiary of state-run oil company Petróleos de Venezuela SA, or PdVSA. The government also agreed to restart negotiations in Mexico with representatives of Venezuela’s opposition, who want officials to agree to free and fair presidential elections in 2024.

News of the meeting in Caracas, though, has caused a political backlash in Washington and in Florida, where exiled Venezuelans live and have forged links to the state’s powerful and conservative Cuban American community.

“The democratic aspirations of the Venezuelan people, much like the resolve and courage of the people of Ukraine, are worth much more than a few thousand barrels of oil,” New Jersey Sen. Robert Menendez, the Democratic chairman of the Senate Foreign Affairs Committee, wrote in a statement. Those sentiments were echoed by both Democratic and Republican lawmakers in Florida.

Venezuelan opposition leader Juan Guaidó, whom the U.S. recognizes as Venezuela’s legitimate president, was told of the U.S.-Venezuela meeting after it had taken place. Mr. Guaidó wrote a letter to Mr. Biden, according to a person with knowledge of the matter, saying that lifting sanctions on Venezuela would do little to ease the world’s crude supply shortages while rewarding Mr. Maduro, a Putin ally whose rule is blamed for leading six million Venezuelans to flee the country.

“Today, more than ever we should be firm and morally consistent,” said Mr. Guaidó in a video press conference from Caracas last week. He said any lifting of sanctions on Venezuela or permission for Chevron to pump oil there should only come in exchange for democratic concessions by the regime.

Answering reporters’ questions last week White House press secretary Jen Psaki said, “There is no dialogue between us and the regime.” She said the administration would consider lifting sanctions on the basis of progress in talks between Mr. Maduro and the opposition.

Chevron officials still say the company could win a license permitting it, along with European oil companies such as Eni SpA and Repsol SA, to operate in Venezuela.

Venezuela claims to have the world’s largest proven oil reserves. But years of mismanagement, corruption and nationalization of oil ventures led production to fall from 3.2 million barrels a day in the 1990s to a 10th of that in 2020. Since then, production has more than doubled as Venezuela turned to opaque foreign companies to boost production, say industry executives. Chevron’s lobbyists assert that the recent production increases show that the U.S. sanctions aren’t working as intended.

But while Chevron has told U.S. officials it could boost production quickly, some oil analysts who closely track Venezuela doubt the company could deliver. Even in good times, Venezuela had never increased production anywhere near the level of recent optimistic projections, according to Francisco Monaldi, director of the Latin America Energy Program at Rice University’s Baker Institute.

Chevron’s perseverance in Venezuela has come as the company has tried to get Venezuela to pay money owed under production-sharing agreements. The company wrote down all of its assets there in 2020, taking a charge of $2.6 billion. Nonetheless, it stayed, receiving periodic licenses from the U.S. government to retain but not operate assets.

By Christopher M. Matthews and José de Córdoba. Timothy Puko in Washington contributed to this article.

Write to Christopher M. Matthews at christopher.matthews@wsj.com and José de Córdoba at jose.decordoba@wsj.com