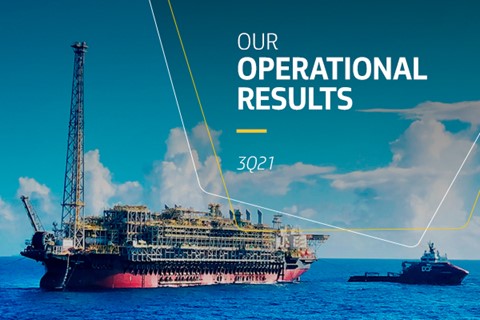 (Petrobras, 20.Oct.2021) — In 3Q21, Petrobras continued to operate safely and with a solid performance, still with a differentiated regime and special protocols due to the pandemic scenario, but with a gradual increase in the number of people on board. The average production of oil, LGN and natural gas reached 2.83 MMboed, 1.2% above 2Q21, mainly due to the start-up, in August, of the FPSO Carioca (Sepia field), in the Santos Basin pre-salt, and the higher average production in the quarter in the FPSO P-70 (Atapu field), which reached full capacity in early July, confirming the good performance of the wells and the platform.

Production in the pre-salt area totaled 2.01 MMboed in the quarter, representing 71% of Petrobras’ total production, against 67% in 3Q20.

Start-up of FPSO Carioca: with 1st oil from the Sépia field, in the Santos Basin pre-salt. The new unit, which has the capacity to process up to 180 kbpd of oil and 6 million m3 of natural gas, will contribute to production growth in the pre-salt. This will be the largest platform operating in Brazil in terms of complexity.

“FPSO Carioca is an example of our strategy of concentrating investments in world-class exploration and production assets, such as the pre-salt, in which we have acreage with large reserves, low risk and competitive costs. This results in higher returns to the company and to society, creating a virtuous cycle of value generation”, says the Director of Production Development, João Henrique Rittershaussen.

Processing of the 1st load of the FPSO Carioca: the oil extracted by the FPSO Carioca, with a light profile and density of 27.5° API, was transported by the Rio Grande vessel, which unloaded 44,650 m³ of the product at the São Sebastião terminal and was carried through pipelines to produce oil products at the Henrique Lage Refinery (Revap) and the Paulínia Refinery (Replan), both in São Paulo.

Signature of a Letter of Intent for the Mero 4 FPSO: with SBM Offshore for chartering and providing services for the FPSO Alexandre de Gusmão, which will be allocated to the Mero 4 Project, in the Santos Basin pre-salt, where we plan to interconnect 15 wells, 8 of which oil producers, 6 water and gas injectors and 1 well capable of operating either as a producer or a gas injector.

Start of gas export from P-69: located in the Tupi field, in Santos Basin. P-69 is the 8th unit in Tupi to export gas, enabling a better economic management of the reservoir and the consequent increase in value creation.

On August 12th, the National Agency for Petroleum, Natural Gas and Biofuels (ANP) approved the Búzios Co-participation Agreement, which regulates the coexistence of the Transfer of Rights and Production Sharing Agreements in the Transfer of Rights Surplus for the Búzios field in the Santos Basin pre-salt. Following this approval, along with the receipt, by Petrobras, of the payment related to the obligations of our partners CNOOC Petroleum Brasil Ltda. (CNOOC) and CNODC Brasil Petróleo e Gás Ltda. (CNODC), the agreement became effective on September 1st. As a result, we now hold the exploration and production rights of 90% of the surplus volumes and of 92.666% of the shared reservoir.

It is worth mentioning that, on September 29th, CNOOC expressed its interest in exercising the option to purchase an additional 5% of the Transfer of Rights Surplus Production Agreement, in the Búzios field. The impact on Petrobras’ production curve will only start after the closing of the transaction, with no expected impact on the 2021 production target.

In terms of our portfolio management, on July 14th, we concluded the assignment to 3R Rio Ventura SA of our 100% stake in Polo Rio Ventura, comprising 8 onshore exploration and production fields located in the state of Bahia, whose average production was 780 bpd in 1H21. On September 1st, we concluded the assignment to Total Energies of our 10% stake in the Lapa field, whose production averaged 50.7 kboed in 1H21 (5.07 kboed being Petrobras’ share). On October 8th, we completed the transfer of our 50% interest in the Rabo Branco onshore field, located in the Sergipe-Alagoas Basin, to the company Petrom Produção de Petróleo e Gás Ltda, whose production averaged 131 bpd in 2020 (65.5 bpd being the portion corresponding to Petrobras). These operations are in line with Petrobras’ portfolio optimization and capital allocation improvement strategy, with a view to maximizing value.

We continue to increase the share of pre-salt oil processed in our refineries, in line with the production profile and with the demands and opportunities in the national and international markets. Pre-salt oil processing remained high in 3Q21, representing 63% of processed feedstock and setting a new record of 1,125 kbpd, a 65% share, in September. The adequacy of the refining park to enable greater processing of pre-salt oil is directly associated with the increased flexibility, as well as with guaranteeing the reliability and availability of the refining park. This is in line with Petrobras’ economic and sustainability guidelines, as pre-salt oil presents a high yield of medium distillates with higher value added and low sulfur content.

RPBC implemented projects for the energy use of the fuel gas produced at the refinery, bringing forward by three years the expected results for the reduction in natural gas consumption, increase of energy efficiency and reduction in the emission of greenhouse gases. This action is in line with the initiatives of the RefTOP (World Class Refining) program to increase energy performance, with a view to making better use of inputs such as natural gas, electricity and steam in the operations and preparing refining activities for the transition to a low carbon economy.

In 3Q21, we increased the share of Búzios oil in our mix of exports in order to take advantage of the arbitrage opportunity that has favored the sale of this stream in markets such as Europe and the Americas. Therefore, we improved the profitability of our exports and expanded our client portfolio with a new refiner for the Búzios stream and two for Atapu.