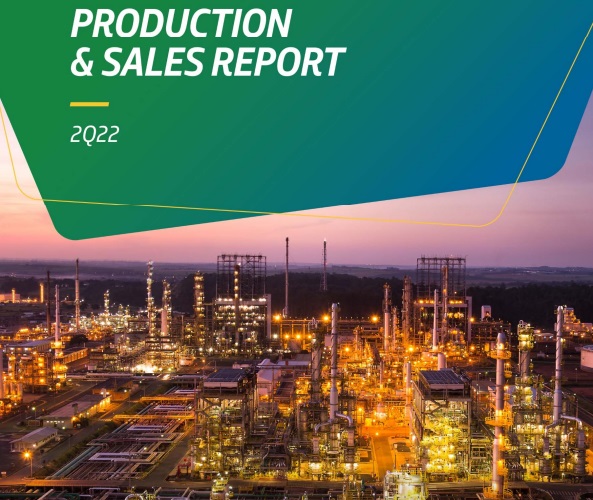 (Petrobras, 21.Jul.2022) — In 2Q22, we (Petrobras) delivered an operating performance fully in line with the company’s plans. Average production of oil, NGL and natural gas reached 2.65 MMboed, 5.1% below 1Q22. This result was mainly due to the beginning of the Production Sharing Contract for the Surplus Volumes of the Transfer of Rights of Atapu and Sepia, effective from May 2, which reduced Petrobras’ work interest in these fields (with an impact, in 2Q22, of 90,000 boed relative to Petrobras production volumes from these fields), in addition to the higher number of stoppages for maintenance and interventions in pre-salt and post-salt platforms. These effects were partially offset by the production start-up of FPSO Guanabara (Mero field) and the continuity of the ramp-ups of FPSOs Carioca (Sépia field) and P-68 (Berbigão and Sururu fields), both located in Santos Basin pre-salt. These effects were already expected and did not impact our production guidance for 2022, of 2.6 MMboed, with a variation of 4% up or down.

Total production in the pre-salt was 1.94 MMboed, representing 73% of Petrobras total production. Total production operated by Petrobras, in turn, reached 3.55 MMboed in 2Q22, 2.9% lower than in 1Q22, mainly due to the higher number of losses with maintenance stoppages and interventions in pre-salt and post-salt platforms, offset by the ramp-up of P-68 and FPSO Carioca and the start-up of FPSO Guanabara, in the Mero field. The highlights of 2Q22 were:

Continuity of ramp-ups of FPSOs Carioca and P-68

FPSO Carioca, whose oil processing capacity is up to 180,000 bpd and 6 million m3/d of gas, achieved an average operated production of 155,000 bpd in the quarter and P-68 reached full capacity on June 21, which allowed the unit to produce 152,000 bpd, confirming the good performance of the wells and platforms.

Start-up of FPSO Guanabara, on April 30

On July 9, the flare-out (first gas injection) of the unit began. Gas utilization allows the reduction of flaring, enabling the sequencing of the platform’s ramp-up, in compliance with current regulations.

Conclusion of the sale of the totality of the participation in fourteen onshore exploration and production fields, denominated Polo Recôncavo

On May 10, we concluded the sale of our participation in the Recôncavo cluster, located in the state of Bahia, to 3R Candeias S.A., formerly known as Ouro Preto Energia Onshore S.A., a wholly-owned subsidiary of 3R Petroleum Óleo e Gás S.A. This cluster comprises 14 onshore fields, whose combined average production, from January to April 2022, was approximately 1.3 kbpd of oil and 444,000 m³/day of natural gas.

The platform, which will have the capacity to produce 70,000 barrels of oil per day, left the Cosco Qidong shipyard (China) on July 8, bound for the city of Angra dos Reis – RJ for the completion of commissioning and preliminary acceptance tests. This unit and the FPSO Anita Garibaldi are part of the Marlim and Voador Revitalization Project, in the Campos Basin. The 2 platforms will replace 9 units in these fields, including those currently in operation (P-18, P-19, P-20, and P-47) and those already in the decommissioning phase (P-26, P-32, P-33, P-35, and P-37).

The unit was designed according to the All Electric concept, which consists in maximizing the use of electricity to power the equipments, reducing carbon emissions. “The completion of a modern FPSO project with the All Electric topside concept represents an important milestone for the Marlim field, which remains a protagonist in value generation for Petrobras,” emphasized Production Development Executive Officer João Henrique Rittershaussen.

The platform is being built and will be operated by the Malaysian company Yinson, establishing a new player in the Brazilian market for chartered FPSOs.

The platform, which will have a capacity to produce 150,000 bpd, left the Cosco Dalian shipyard (China) on July 17, bound for the city of Angra dos Reis – RJ to complete the stages of commissioning, regulatory inspections and preliminary acceptance tests. The FPSO Almirante Barroso, contracted with MODEC, will be the first leased unit to start operations in the Búzios field and the fifth to start production in the field, which includes the four owned units P-74, P-75, P-76, and P-77.

The total utilization factor (FUT) of the refining facilities has been growing over the last few quarters, reaching 89% in 2Q22, 2 p.p. above 1Q22

Following the conclusion of the scheduled maintenance stoppages at REVAP and REDUC, we reached a FUT of 97% at the end of June. The highlight was REPLAN, the country’s largest refinery, which has the capacity to process approximately 20% of the refining facilities’ feedstock. This performance resulted in higher production, with diesel, gasoline and jet fuel yields of 67% in 2Q22, in line with 1Q22, taking advantage of favorable market conditions, in compliance with safety, environmental and quality requirements for the output and with a focus on value generation. When it comes to diesel and gasoline, we reached an yield of 62% in 2Q22, above the 60% average of the last three years. Maintenance stoppages are scheduled for 3Q22, especially HDT and HDS at REGAP, distillation and coking units at REPLAN and distillation at REPAR, which will occur mostly in 4Q22.

In line with higher market demand, 2Q22 asphalt production was 33% higher than in 2Q21. May was the highlight with sales of 200 thousand metric tons of asphalt, 43% higher up on May/2021, and set a historical record in sales driven by higher asphalt binder prices on the global market.

Production of S-10 diesel in 2Q22 remained at the same level as in 1Q22, with a 55% share of this grade over total diesel production. Compared to 1H21, output was 6 p.p. higher, reflecting the strategic orientation to increase the share of cleaner products in the production profile.

In June, the first test operation was held for supply through a bunker pipeline at the SUAPE Terminal from the RNEST refinery. This operation allows for the optimization of Petrobras’ cabotage operations and fleet supply.

In June we initiated exports of green coke from RNEST to China, destined for the international aluminum manufacturing market.

The new Eagle Colatina tanker was incorporated to Petrobras fleet, the first of three Eco Type ships built to reinforce the fleet of more sustainable ships for offloading operations in platforms operated by Petrobras. Leased from third parties and with 155 thousand dwt, Eagle Colatina has eco-efficient technologies and will contribute to reduce carbon emissions in maritime transportation, in addition to reinforcing the fleet of lighter vessels at a strategic moment for the company, adding operational safety, reliability, and value to Petrobras’ offloading operations. Thus, Petrobras reassures its commitment to reduce greenhouse gas emissions by 25% by 2030, in line with its ambition to achieve neutrality of these emissions in our operations in a timeframe compatible with the Paris Agreement.

With RefTOP, World Class Refining Program, which aims to increase the competitiveness of Petrobras’ refining facilities, we made progress toward greater energy efficiency and emissions reductions at the São Paulo and Rio de Janeiro refineries, in addition to better performance throughout the whole refining system. The Greenhouse Gas Emissions Intensity (GHG index) of the entire refining system continued to decline in 1H22, with a cumulative result of 38.1 kgCO2e/CWT, down from 40.4 kgCO2e/CWT in 1H21. The Energy Intensity, which measures the specific energy consumption of a refinery, is also decreasing, which means that the refineries are using less energy to produce oil products compared to a standard consumption and thus reducing emissions. In 1H22, the cumulative index[1] result is 5% lower than in 1H21, 109.1 versus 114.7. If we look at the refineries that are included in the RefTOP Program (RPBC, RECAP, REPLAN, REVAP, and REDUC), the results are even more significant compared to the system’s figures, with an accumulated IGEE of 36.8 kgCO2e/CWT, and an Energy Intensity value lower than the rest of the assets, reaching 107.0 in 1H22. As a highlight, REPLAN achieved high availability and performance, reaching low energy intensity in 1H22, even reaching historical records in some days, in line with the best global refiners. By 2025, RefTOP includes the development and implementation of 100 new energy performance projects to make better use of inputs such as natural gas, electricity and steam in the refinery’s operations.

In Biorefining, in April, a production test was held for biojet by co-processing vegetable oils at REPAR with renewable content of up to 1% in the mixture, highlighting Petrobras as one of the first companies in Latin America to hold this test. The production test is the first phase of the program, which precedes commercial tests, and this delivery shows how it is possible to reconcile environmental sustainability with value generation, using technology to seek to contribute to reducing carbon emissions in the aviation sector.

In 2Q22, there was a reduction in natural gas thermoelectric dispatch compared to 1Q22 allowing a 57% reduction in total emissions from our thermopower facilities as a result of the continued improvement in hydrological conditions with the recovery of reservoir levels and overcoming the effects of the water crisis throughout 2021.