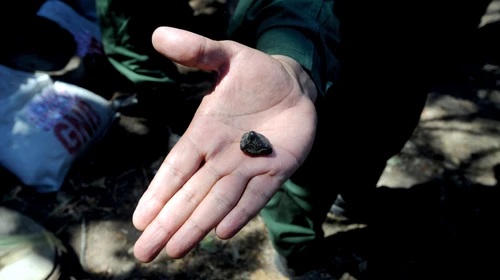 Authorities in southern Colombia pulled over a cargo truck looking for drugs in early August. But instead of finding a pile of cocaine bricks, the truck was loaded with a sandy, blueish-black rock called coltan.

“So we apprehended the driver.”

As the demand for gaming consoles, smartphones and everything AI increases in a post-pandemic setting, so too is the impulse for violent extremist groups in Colombia and Venezuela to mine and extort the precious metals that go into the chips that power these devices.

For decades, criminal groups and guerrilla armies in Colombia and Venezuela have financed their operations by taxing coca (the base ingredient for cocaine) growing and taking a cut from cocaine shipments. Now, these armed groups are scrambling to soak up new revenues through illegal gold mining, illegally-logged timber, and the metals that fuel electronics, like coltan.

“Coltan sales come nowhere close to the scale of money made off of cocaine and illegal gold mining, but it does show that groups are diversifying their income,” said Bram Ebus, a consultant for the International Crisis Group and expert on illegal mining in Venezuela.

“These groups basically try to tax all economic activities in the regions under their control.”

The 1.5 tonne shipment of coltan seized in mid-August in Colombia’s southern Guainía province comes from illegal mines across the border in Venezuela. From there, traffickers moved the shipment across the fraught, western border with its neighbor Colombia. For years, Colombian rebel groups have taken refuge in Venezuela, where former President Hugo Chávez, and current President Nicolás Maduro, were sympathetic to the rebels’s leftist cause – although there is some evidence that this might be shifting.

The traffickers, in cahoots with corrupt officials, then use fraudulent documents to move the Venezuelan coltan through Colombian ports, according to the Crisis Group, where the rare metal then gets folded into the semiconductor chips of almost every kind of electronic device circulating in the global economy.

“So far, law enforcement efforts to tackle environmental crimes and illegal mining have been fruitless because the financiers of these crimes remain untouched.”

The seizure in Guainía earlier this month was part of a wider military campaign to target environmental crime. The southern stretches of Venezuela and Colombia are some of the most biodiverse areas in the world. Illegal mining of coltan and other minerals as well as coca-growing threatens these areas with deforestation, and the displacement of indigenous communities who steward the sensitive ecosystems where coltan gets exploited.

Semiconductor manufacturing, in which coltan and other metals are used to fuel the world’s $5 trillion ICT sector, has become a sensitive nerve in the technology, privacy and US-China relations. The high demand for manufacturing digital technology infrastructure in this geopolitical game means companies are demanding ever more quantities of metals, leaving a shortage in supply.

In 2016, Colombia’s government signed a peace deal with its main rebel group, the Revolutionary Armed Forces of Colombia (FARC). The deal demobilized most fighters, but some dissented and returned to their lucrative criminal deeds.

Across the river that separates Colombia and Venezuela, FARC dissidents and ELN rebels – the FARC’s smaller, sister group – run the gold and coltan mines in lawless Venezuela.

Since U.S. sanctions make it next to impossible for middlemen to ship the metal out of Venezuela, they run it back over the border into Colombia and export it to refiners in Europe and the U.S., where it then enters the industrial manufacturing supply chains that fuel Apple smart phones and Microsoft Xbox gaming systems.

Apple claims that it scrutinizes its supply chain for conflict metals and tries to weed out bad actors at the miner, smelter and refiner levels, according to the company’s 2020 conflict minerals report. Since 2009, the company reported that it has kicked out 146 smelters and refiners who were found to have processed conflict-tainted gold, tin, tungsten, tantalum – a derivative of coltan.

But as guerrilla groups continue to profit from the illegal mining of such metals, corporations must wrestle with hitting a balance of doing more to curb contraband without curbing their supply chains.