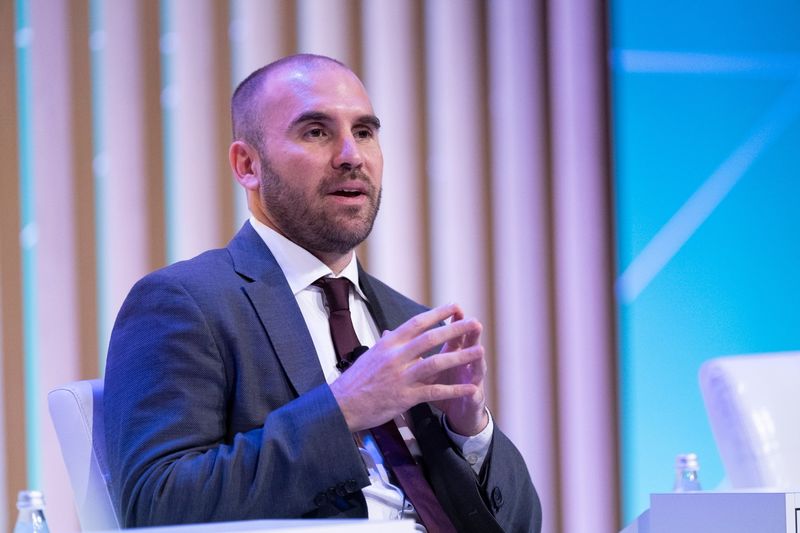 Guzman announced his decision in a seven-page letter published on Twitter. No replacement was immediately announced.

The minister had come under pressure as Argentines battle heightened inflation of more than 60%. The shakeup also raises doubts over whether Argentina can comply with a $44 billion program with the International Monetary Fund, whose goals and objectives for the second half are seen by private economists view as too challenging to reach.

Guzman, a 39-year-old economist who conducted research at Columbia University alongside Nobel Prize winner Joseph Stiglitz, lost support over the last months from the far-left wing of the coalition led by Vice President Cristina Fernandez de Kirchner. Lawmakers loyal to her in Congress voted against the IMF agreement he negotiated, even though the deal was approved with ample backing.

Complaints against Guzman had billowed recently with Kirchner herself slamming the government’s management of inflation, the currency market and reserves in a May speech. In a Saturday speech ahead of the publication of Guzman’s resignation letter, she once again criticized economic policy.

In his exit note, Guzman called for a “political agreement within the governing coalition.”

“That will allow whoever replaces me to have the ability to manage centrally the tools of macroeconomic policy that will be necessary to continue the advances we’ve made and the challenges ahead,” he wrote.

Over his almost 31-month tenure, Guzman restructured $65 billion of international bonds with private creditors in 2020 and spearheaded talks for a refinancing of an IMF deal inked by the prior administration. While both deals bought the government time to repay Wall Street and the Washington-based lender, neither accomplished a boost in investor confidence.

The nation’s bond prices remain in distressed territory, above 20 cents on the dollar, and the country’s parallel exchange rate — which indicates local confidence amid capital controls — slumped to a record low of 252 pesos per dollar this week.

Guzman was expected to travel to France ahead of a July 6 meeting to continue negotiations over $2 billion owed to a group of creditor nations known as the Paris Club.

In addition to the challenges of curbing inflation and rolling over a growing pile of local debt, Guzman was also tasked in the near-term with overseeing the reduction of energy subsidies through a process of segmenting fees based on income, a socially sensitive move that would allow the government to meet spending reductions necessary for the IMF plan.

Guzman also cut the government’s fiscal deficit last year after it ballooned at the peak of the pandemic in 2020. Kirchner heavily criticized that belt tightening in September, after the ruling coalition lost control of the Senate in mid-term elections.

One of the president’s most loyal ministers, Guzman’s resignation lays bare the government’s internal divide between Fernandez and Kirchner. The president last month was forced to ask Production Minister Matias Kulfas to resign, after he allegedly criticized members of the coalition in text messages to the press.

Guzman had butted heads with some of his own deputies loyal to Kirchner. In May 2021, local Argentine press reported a policy rift between Guzman and a junior official in the Energy Ministry who Guzman requested be fired. As the top economic policymaker, Guzman had control over the Energy Ministry, but the official, aligned with Kirchner, allegedly refused to quit and stayed in his post.

Since the government sealed the IMF deal, Fernandez’s focus has also shifted toward economic issues that have been spearheaded by other ministries. In March, the president declared a “war on inflation” and told ministers to take “all measures necessary” to combat elevated inflation but price gains continued escalating. While Guzman played a role in the inflation strategy, measures on prices were mostly led by officials close to Kirchner.

By Patrick Gillespie. With assistance by Amy Stillman