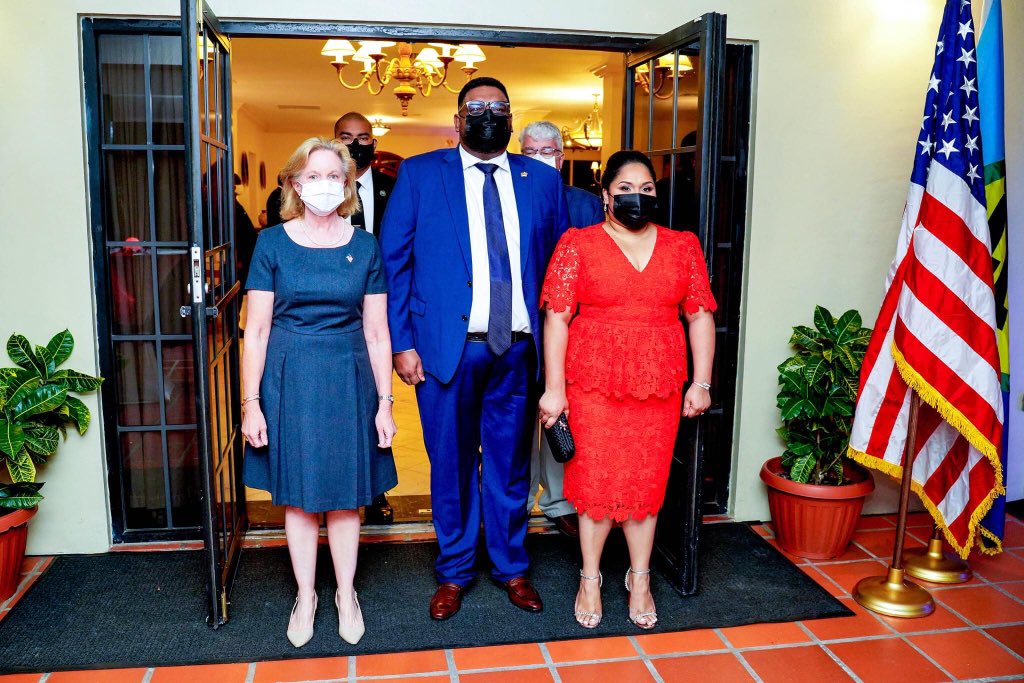 (DPI, 8.Jul.2021) — His Excellency Dr Irfaan Ali called the relationship between Guyana and the United States of America strong and valuable and pointed to greater partnerships between the two nations moving forward.

The Commander in Chief and several senior members of his Government, including the Prime Minister, Brigadier (Ret’d) the Honourable Mark Phillips and Vice President, the Honourable Dr Bharrat Jagdeo, joined the United States Ambassador to Guyana Sarah-Ann Lynch and other members of the US Embassy for a special 245-year celebration of the Declaration of Independence.

President Ali, who delivered the feature address at the Ambassador’s residence, said that the US and Guyana were friends, who share a strong relationship. “That is what Guyana and the United States share, a strong, healthy, respectful and valuable relationship.”

He also wished his US counterpart President Joseph Biden good health and personal well-being and credited him for his progressive policies in climate change. The US’s decision made earlier this year to rejoin the Paris Agreement on Climate Change was commended and Mr Biden’s plan to reduce greenhouse emissions by 50% by the year 2030 along with other critical developmental policies were applauded.

According to President Ali, “Guyana looks forward to working closely with the Government of the United States, to build a more resilient and sustainable post-COVID-19 future” and to combat and mitigate the adverse effects of climate change.

Achievements of the Guyanese Diaspora were also highlighted and the President noted that many have contributed to aspects of development within the US.

“The recent co-naming of the corner of Liberty Avenue and Lefferts Boulevard of Liberty Avenue in Queens, New York to ‘Little Guyana,’ is both recognition and an acknowledgement of the contributions which Guyanese have made to the development of the State of New York. Guyanese have also distinguished themselves and contributed to the development of other parts of the United States.”

The Head of State also acknowledged the role that the US played in safeguarding Guyana’s democracy during the 2020 national election and expressed his gratitude for support at the territorial level.

“We look forward to the continued support of the United States in safeguarding our democracy and our territorial integrity.”

Last month’s collaboration between the US, Guyana and several other nations within the region and further afield in Operations Tradewind 2021 was also mentioned.

The President said that the tactical exercise was a “demonstration of our shared commitment to partnership in the face of shared challenges, and in pursuit of common goals”.

Credit was also given to the US Ambassador for her veracity and impartiality.

“We must celebrate the relationship between the United States Embassy here in Guyana led so well by Ambassador Sarah Ann-Lynch and the Government and people of Guyana. We want to thank you for your strong, resilient and faithful leadership…one in which you have lead with great integrity.”