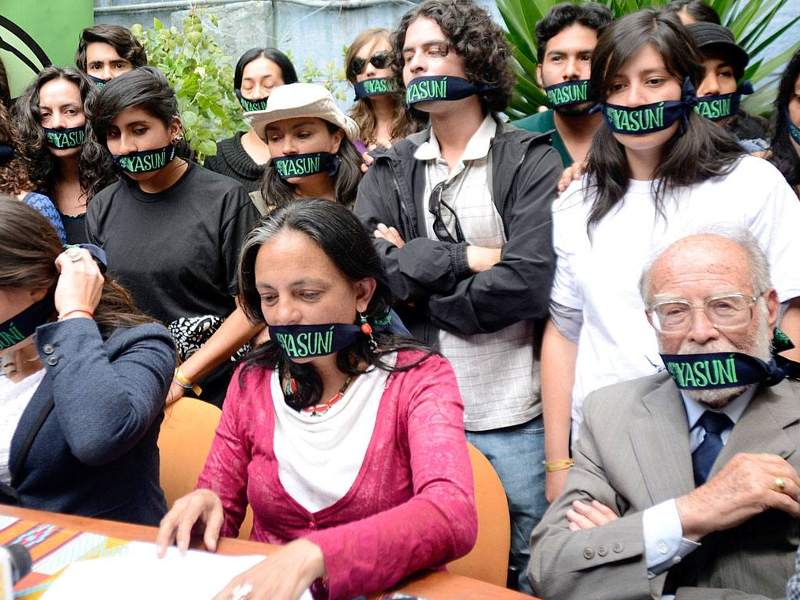 (Amazon Watch, 18.May.2020) — Today, JPMorgan Chase – the largest bank in the United States and the largest banker of fossil fuels worldwide – will hold its Annual General Meeting. Among other decisions, the bank’s shareholders will vote on whether or not Lee Raymond should remain on the bank’s Board of Directors, a position he has held for decades. Raymond is known for being a climate-change denier and former CEO of fossil fuel giant Exxon. Amazon Watch joins with fellow members of the Stop the Money Pipeline Coalition in calling for Raymond’s removal from the board, and also calls on the bank to adopt much stronger climate and human rights commitments that include an end to financing the industries responsible for destroying the Amazon rainforest and trampling on indigenous rights.

JPMorgan Chase’s February announcement of new, limited restrictions on its financing of certain kinds of fossil fuels in certain highly controversial extraction sites was a step in the right direction, but like many other financial institutions’ commitments, it falls short. Notably, the bank’s climate policy fails to outline measurable commitments to protect the Amazon and other sensitive biomes, many of which are home to indigenous peoples vehemently defending their ancestral territories. Amazon Watch research found that JPMorgan Chase has contributed over $890 million to Amazon crude oil extraction since 2017 and nearly $600 million to beef companies linked to illegal deforestation in the Brazilian Amazon.

“The fact that JPMorgan wants to keep long-time climate denier Lee Raymond on its board is a clear indication of its lack of serious climate action. While new policies to restrict certain types of fossil fuel projects are important, they are nowhere near sufficient to the scale of JPMorgan’s climate problem.

“Right now, JPMorgan Chase is not a ‘sustainability’ leader. It must end corporate financing for fossil fuel expansion in the Amazon and around the world – particularly when that expansion happens on indigenous territories.”

A March 2020 Amazon Watch report, Investing in Amazon Crude, uncovered JPMorgan Chase’s role as a top financier of Amazon crude oil. As of (Q4)2019, JPMorgan Chase held over $400 million of stocks and bonds in Geopark, Frontera Energy, and Andes Petroleum, and that between (Q3)2017-(Q4)2019 the bank contributed at least $490 million in debt financing to enable regional expansion of these companies’ operations, bringing its total contribution to Amazon crude oil operations in recent years to over $890 million:

— GeoPark is a Chile-based oil and gas company with an oil lease in the Peruvian Amazon that overlaps the territories of indigenous Achuar and Wampis peoples. GeoPark just completed the purchase of Amerisur, a British company with leases in the Colombian Amazon that overlap with Siona and traditional campesino territory. See pages 22-25 of Investing in Amazon Crude for details.

— Frontera Energy is a Canadian oil and gas company with leases for 40 production blocks in Colombia, Ecuador, Guayana and Peru. It faces strong opposition from indigenous peoples, including the Achuar near the Ecuadorian border, for its operations on and near their ancestral territories. The company has had to shut down its operations on several occasions because of poor infrastructure and leaking pipelines. Local indigenous federations, whose territories have been horribly damaged by oil spills and other environmental hazards left in the company’s wake, have organized multiple protests to successfully shut down Frontera’s extraction and transport operations temporarily. See pages 20-21 of Investing in Amazon Crude for details.

— Andes Petroleum is a petroleum exploration and production partnership of two Chinese state-owned companies, which has held leases for blocks in the Ecuadorian Amazon overlapping the territory of the Kichwa of Sarayaku and the Sapara. The Sapara nation was included in the Representative List of the Intangible Cultural Heritage of Humanity by UNESCO in 2001. See pages 18-19 of Investing in Amazon Crude for details.