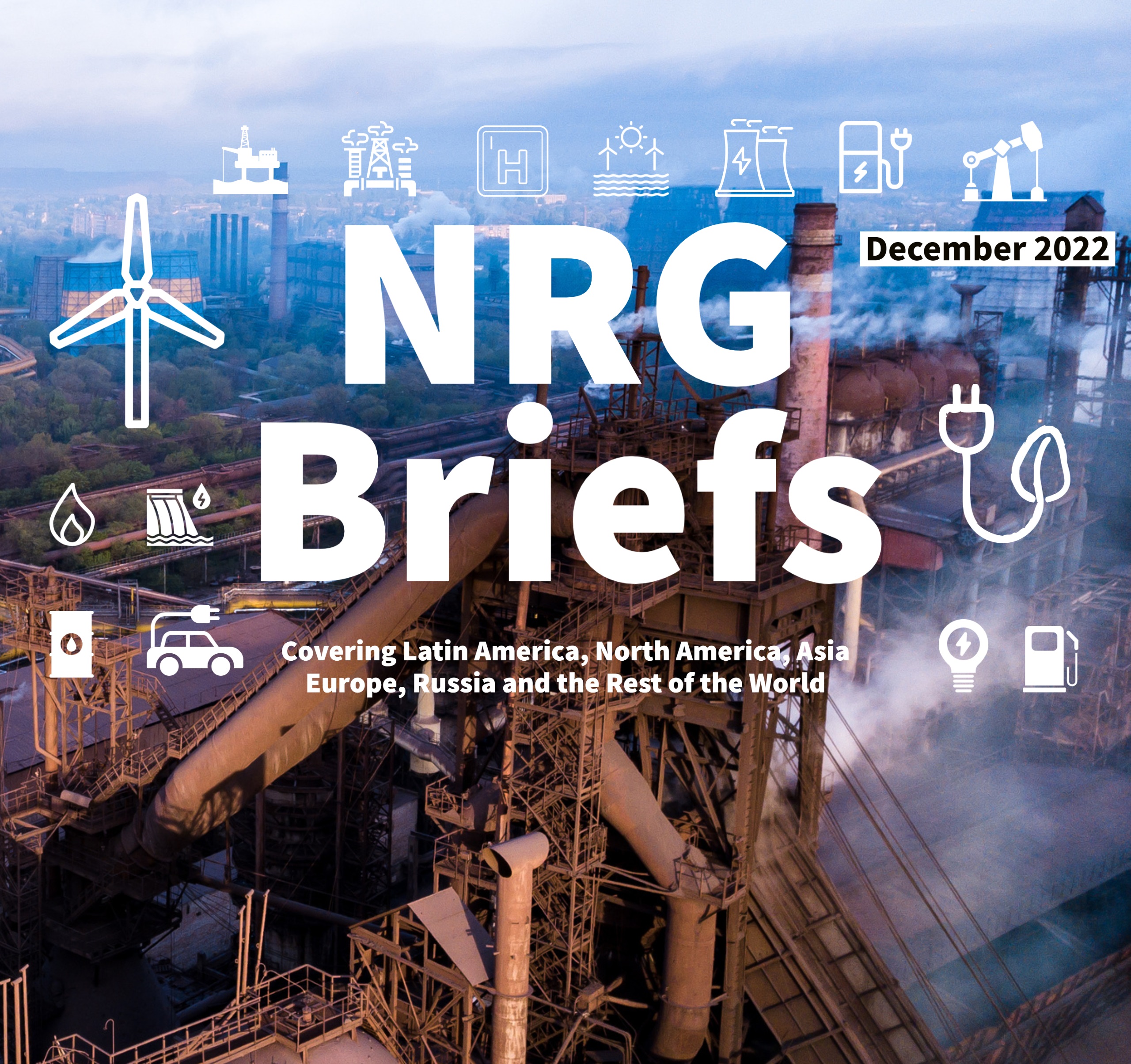 (Energy Analytics Institute, 31.Dec.2022) — Energy briefs as well as others related to finance and politics during December 2022 including Washington’s easing of sanctions on Venezuela resulting in increased US imports of that heavy/sour crude; twin-island country Trinidad and Tobago eying its annual energy conference in Port of Spain; Savannah Energy entered into a Share Purchase Agreement with Petronas (E&P) Overseas Ventures to acquire Petronas’ upstream and midstream asset portfolio in Chad and Cameroon; Hess Corporation’ board declaring a quarterly dividend; Chevron Corporation reveals CAPEX budgets for 2023; Guyana launches offshore licensing round for 14 blocks; and more.

— The newly formed supervisory board of Uniper SE selected Tom Blades as its new chairman in a constituent meeting. Previously, at the end of 21 Dec. 2022, the Fortum representatives had resigned from the Uniper supervisory board as announced, Uniper said 22 Dec. 2022 in an official stmt. The Düsseldorf local court had then appointed the new supervisory board members w/ immediate effect on 22 Dec. 2022.

— Equinor announced the startup of Johan Sverdrup Phase 2. When the field reaches plateau production, every third Norwegian oil bbl will come from this giant field, which for decades will be essential to ensuring high and stable energy deliveries from Norway, Equinor CEO Anders Opedal announced 15 Dec. 2022 over LinkedIn. “At a time when energy security is at the forefront, these barrels can supply 6%-7% of the daily oil demand in Europe. Powered from shore, the field also has very low emissions, contributing towards the ambition of zero greenhouse gas emissions from production on the Norwegian continental shelf by 2050,” Opedal said.

— Touchstone Exploration Inc. (TSX, LSE: TXP) closed its previously announced UK private placement on the same terms as were provided in the co.’s news release dated 6 Dec. 2022. The new common shrs issued in connection w/ the private placement have been conditionally approved for trading on the Toronto Stock Exchange and have been admitted for trading on the AIM mkt of the London Stock Exchange, the co. announced 14 Dec. 2022 in an official stmt.

— FACT BOX: Methane, a primary component of natgas, and CO2, a byproduct of the burning of oil, natgas, and refined petroleum products, are GHGs addressed by the Kyoto Protocol, according to INEOS, one of the world’s largest chemical cos. as measured by revenue.

— Petrobras, in relation to the news published in the local press, said 8 Dec. 2022 in an official stmt that there was no decision to suspend the sale of the refineries that are in the co.’s divestment program.

— Guyana’s competitive bidding round process, officially launched w/ publication of the notice given under the Petroleum (E&P) Act, in the Official Gazette by the Minister of Natural Resources on 9 Dec. 2022 is expected to close w/ the submission of bids on 14 Apr. 2023, and contract awards expected by 31 May 2023 following evaluation of bids and negotiation process as indicated in the ministry’s indicative terms and guidelines for the bidding round.

— Guyana’s gov’t launched an offshore licensing round which includes 14 blks (3 deep water, 11 shallow water), the Ministry of Natural Resources revealed 9 Dec. 2022 in an official stmt. The awarding of contracts will take place on 31 May. 2023.

— Manturo Precious Metals Corp. (TSXV: MNTR) (OTCQB: MSLVF) (FSE: 9TZ) announced 20 Dec. 2022 in an official stmt appointment of Stephen Clayson to the position of CEO and director of the co., effective immediately. In addition, Dr. Chris Wilson will be stepping down as Executive Chairman and as a director of the co.

— The Trinidad and Tobago Energy Conference takes place at the Hyatt Regency in Port of Spain from 23-25 Jan. 2023. More details here.

— “The recent decision by the Biden administration to ease sanctions on Venezuela should result in increased US imports of that heavy/sour crude and ease oil prices,” Wells Fargo analysts wrote 15 Dec. 2022 in a research note to clients.

— “2022 was a significant year for Metalla and the precious metals royalty landscape,” said Metalla Royalty President and CEO Brett Heath in a stmt on 28 Dec. 2022 . “We announced five transactions, to acquire 15 new royalties, for a combined purchase price of $33.5 million in cash and stock. We took a defensive approach for the first three quarters of the year, given the increased merger and acquisition activity. After seeing several peer group companies acquired or merged into new entities, we see a tremendous opportunity to capitalize on our business strategy as we have seen in the fourth quarter of 2022. We believe Metalla has a significant advantage in 2023, attracting more high-quality third-party assets, given the size, scale, and track record.”

— Canada Nickel Company Inc. (TSXV: CNC) (OTCQX: CNIKF) inked a deal to acquire a 100% interest in the past producing Texmont property situated between the co.’s Deloro and Sothman properties south of Timmins, Ontario, the co. announced 19 Dec. 2022 in an official stmt. The co. also reported results from the first four holes at Texmont and first five holes targeting higher grade mineralization at Sothman.  All nine holes have assays pending.

— TC Energy aims to reduce GHG emissions intensity from its operations 30% by 2030, the co. announced on its website.

— GreenPower Motor Company Inc. (NASDAQ: GP) (TSXV: GPV) announced that Claus C. Tritt has joined the co. as VP of Medium Duty and Commercial Vehicle Sales, bringing over 36 yrs of experience to the position, the co. announced 28 Dec. 2022 in an official stmt.

— For the second yr in a row, Citgo Lemont Refinery is awarding first responder grants as part of a new program. The CAER First Responder Grant Program was created in 2021 by the Citgo Community Awareness Emergency Response (CAER) Council, Citgo Petroleum Corporation announced 22 Dec. 2022 in an official stmt.

— Citgo Petroleum Corporation repaid in full approximately $1.056bn aggregate principal amount of indebtedness outstanding under the co.’s Senior Secured Term Loan B due March 2024. The repayment was funded through cash on hand, the Houston-based refiner said 21 Dec. 2022 in an official stmt.

— Sempra (NYSE: SRE) (BMV: SRE) is the highest-ranked utility on the Wall Street Journal‘s Management Top 250 ranking for 2022. The Management Top 250 is one of the most prestigious ranking efforts dedicated to measuring corporate effectiveness, the San Diego-based co. said 19 Dec. 2022 in a stmt on its website. “This is the 4th time the co. has been named to the Management Top 250, and the 2nd consecutive yer it has been ranked highest among industry peers in its category.

— The Biden-Harris Administration, through the US Department of Energy (DOE), revealed its intent to issue $750mn in funding from President Joe Biden’s Bipartisan Infrastructure Law to dramatically reduce the cost of clean-hydrogen technologies, the DOE announced 16 Dec. 2022 in a stmt on its website.

— UptimeAL, an AI-based digital transformation solution provider for the energy, chemicals, and heavy industries, has raised a total of $3.5mn in funding led by Emergent Ventures. Joining the round are existing investors YourNest Venture Capital and new investors Sharad Sanghi, AI Sprouts, and Venture Catalysts. W/ the funding, UptimeAI plans to expand in the US to cater to its growing customer base, the co. announced 15 Dec. 2022 in an official stmt.

— Denbury offered its carbon capture, utilization, and storage (CCUS) business outlook, the co. revealed 13 Dec. 2022 in a presentation on its website.

— PBF Energy Inc. (NYSE: PBF) said Karen B. Davis will assume the role of CFO, on an interim basis effective 1 Jan. 2023, the co. announced 7 Dec. 2022 in an official stmt. Davis previously served as EVP and CFO of Western Refining, Inc. and its affiliated entities, Western Refining Logistics LP and Northern Tier Energy, LP through May 2017.

— Chevron Corp. announced 2023 organic CAPEX budgets of $14bn for consolidated subsidiaries (CAPEX) and $3bn for equity affiliates (affiliate CAPEX), which total near the high end of the co.’s guidance range, the oil major reported 7 Dec. 2022 in an official stmt.

— In 2023, the return of Freeport LNG volumes to the mkt will be good but commodity prices are still expected to decline, according to the Energy Information Administration (EIA) w/ oil and gas prices below $100/bbl and $6/MMBtu vs 2022 when they will be slightly above these marks, the agency announced on 6 Dec. 2022 in a stmt on its website.

— The top five countries of destination of US LNG exports in Sep. 2022 representing 61.4% of the 295.1 Bcf (9.8 Bcf/d) exported in the mth including: France (57.9 Bcf), United Kingdom (48.0 Bcf), Netherlands (30.9 Bcf), Spain (24.7 Bcf), and South Korea (19.7 Bcf, the Energy Information Administration (EIA) announced in early Dec. 2022 in a stmt on its website. While the ranking of the five countries tends to shift each month, the trend of Europe and Asia topping the rankings as the main destinations for the bulk of U.S. LNG export has little changed, according to Department of Energy (DOE) data.

— On 13 Dec. 2022, Savannah Energy entered into a Share Purchase Agreement (“SPA”) w/ Petronas (E&P) Overseas Ventures SDN. BHD. to acquire Petronas’ upstream and midstream asset portfolio in Chad and Cameroon. Completion of the proposed acquisition remained subject to satisfaction of certain conditions precedent which have not yet been satisfied, and Savannah and Petronas have, therefore, mutually agreed to terminate the SPA w/ immediate effect, Savannah announced 13 Dec. 2022 in an official stmt.

— Gold Fields Limited (JSE: GFI) (NYSE: GFI) said Chris Griffith will step down from the BODs and as CEO of Gold Fields, effective 31 Dec. 2022, Martin Preece has been appointed interim CEO, the co. announced 13 Dec. 2022 in an official stmt.