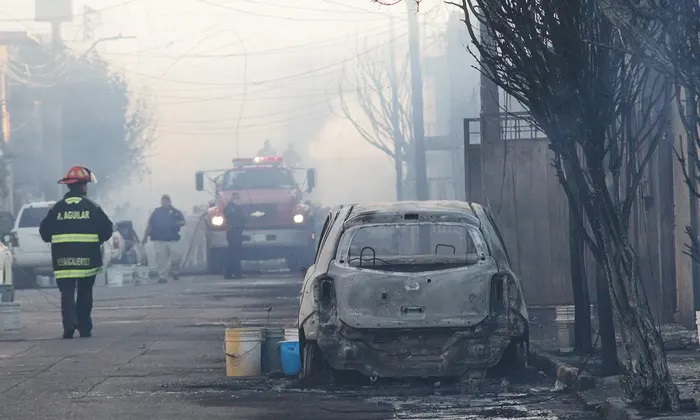 (Reuters, 21.Oct.2022) — A dozen people were rescued from burning homes after a tanker truck crashed into a railway overpass in the central town of Aguascalientes

A huge blaze erupted in central Mexico after a fuel tanker truck crashed into an overpass by a rail line, scorching homes, engulfing the area in thick smoke and leading to a mass evacuation, but causing no fatalities, authorities said.

Video footage of the fire on social media showed a cargo train hurtling through the flames after Thursday’s accident in the city of Aguascalientes, as stunned drivers at the scene retreated from their cars holding children close.

Aguascalientes fire chief Miguel Murillo said between 800 and 1,000 people were evacuated after the tanker collided with the overpass and set fire to a nearby residential area.

Murillo said 12 people were rescued from houses. No one was injured, although one person had suffered minor effects from smoke inhalation. The driver of the truck has been arrested, he said.

Local media initially reported that the fuel truck had hit a train.