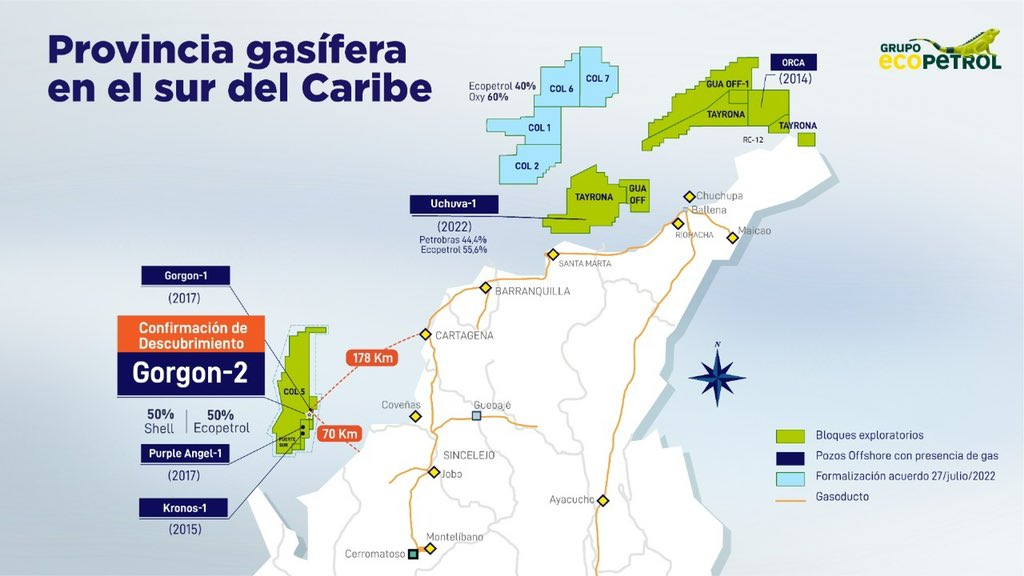 (Ecopetrol, 10.Aug.2022) — Ecopetrol S.A. (BVC: ECOPETROL;NYSE: EC) announces that the Gorgon-2 well proved the presence of gas in ultra-deep waters in the southern Colombian Caribbean, confirming the importance of this province for gas exploration in this area of the country.

The well is located 70 kilometers off the coast and is the deepest well drilled in Colombian waters to the seabed (approximately 2,400 meters).

The drilling of the well, located in the Col-5 block, confirms the extension of the gas discovery made in 2017 in Gorgon-1. The Kronos (2015) and Purple Angel (2017) discoveries were also made in this gas province.

Ecopetrol and Shell (operator) are partners in the South Caribbean blocks (Col-5, Fuerte Sur, and Purple Angel), with 50% participation each.

The development of this gas province in the southern Caribbean could significantly contribute to supporting the country’s energy security and opens the possibility of future gas exports, a fundamental energy source for the energy transition that Ecopetrol has been developing.

RELATED STORY: Petrobras on Gas Discovery in Colombia with Ecopetrol