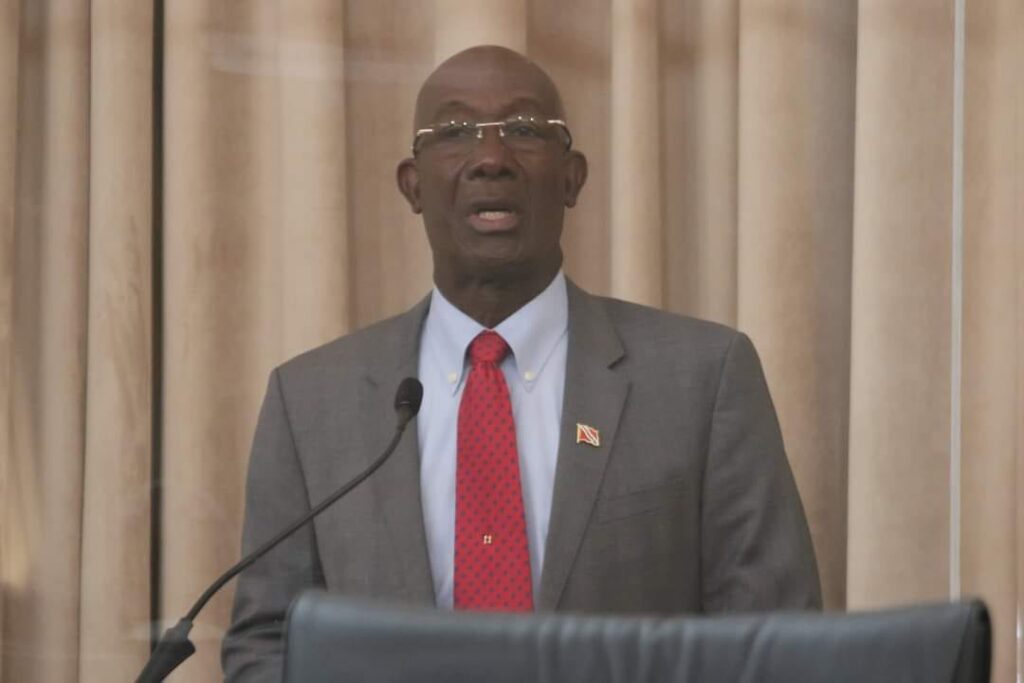 Madame Speaker, I have been authorized by the Cabinet to make the following statement.

This statement concerns matters of national security, which must always be handled carefully and responsibly. However, it has become  necessary for me to address a disturbing, false narrative that has its genesis within recent times where there has been a concerted, and conscious effort, to mislead not only the population of Trinidad and Tobago but also those in the international community who pay attention to the affairs of Trinidad and Tobago. Unfortunately, these efforts to mislead have been led by the Leader of the Opposition and by those who should be more responsible and who definitely ought to know better.

Madame Speaker I am referring to the recent allegations that have been publicly made by the Member for Siparia, that the State is using an interception tool known as Pegasus Spyware Solution (Pegasus) to illegally ‘intercept’ telecommunications and is engaged on widespread ‘spying’ on citizens of Trinidad and Tobago. I must, at the outset, state that this is completely untrue.

I want to assure the people of Trinidad and Tobago, and all observers, that the State does not possess, nor has it ever possessed or use Pegasus spyware. Contrary to the current misinformation campaign on this issue, there is no truth whatsoever, in the allegation that the State, including, the Trinidad and Tobago Police Service (“TTPS”) and/ or the Strategic Services Agency (‘SSA’), or any other state agency for that matter, has any officer using Pegasus spyware.

Madame Speaker, the SSA is the sole custodian of all known interception of communication software and hardware procured by the Government of the Republic of Trinidad and Tobago or any other state agency. This is a policy of the Government that I lead, and have led, since September 2015. As I will explain, my government even resisted repeated attempts by a former Commissioner of Police to obtain, own and utilize, intercept technology by the Trinidad and Tobago Police Service. It is this Government’s policy that all such technology should reside within the control of the SSA. The SSA has provided an intercept suite to be used by the TTPS, but the equipment is the sole responsibility of the SSA and remains under the SSA’s strict jurisdiction. This is to ensure accountability and control by vetted officers engaged in crime-fighting and matters of National Security.

As part of the process and legal procedure for approved intercept of communications, there must be a documented justification for the targeting of any device from which communication is intercepted. This documentation must justify the use of the state’s tools to intercept and creates a record of all intercepts conducted. It is important to also note that the interception of communication is a digital transaction, similar to, for example, a banking transaction, and therefore, it is very easy to verify or disprove allegations of misuse and to determine who made the intercept.

It should be emphasized here, for clarity, that any and all acts of interception of telecommunications without invoking the provisions of the carefully crafted existing laws, are acts of illegality with very serious consequences for any person who so engages.

As I have stated, Madame Speaker, the Pegasus Spyware Solution is not in use by the State in Trinidad and Tobago. Pegasus uses a methodology not covered by the Act and therefore, there has not been any authorization to procure that solution currently, or in the past. I can also state categorically, that the Government took a conscious decision not to procure Pegasus due to its overreaching capacity for penetration, abuse and justifiable concerns about it, including the many internationally troubling reports surrounding its use, which are less than favourable.

Madame Speaker as every Parliamentarian should be aware, one of the safeguards and tenets of accountability expressly provided for in the Act is that there are reports produced annually by the SSA that are required to be laid in Parliament by the Minister of National Security.

I take the time to make this point as the Opposition Leader, a former Prime Minister and consequently a person who chaired the National Security Council, has also used these numbers in reports which have been duly laid in Parliament, to present the numbers of intercepts conducted to create an impression that due to the large number of intercepts there is something untoward taking place. This is simply not so. This is irresponsibility and political mischief intended to frighten and anger the population once they can be mentally corralled into believing that their Government is abusing its authority and is illegally prying into the lives of the ordinary law abiding citizen.

It is also important to note that the Act makes it clear that there are only three persons who can authorize interception of communications, the Chief of Defence Staff, the Commissioner of Police and the Director of the SSA.

Parliament, in enacting legislation, made sure that law-abiding citizens have nothing to fear with respect to these authorized intercepts as these effort and authorized intercept target only criminality and those operating in that realm. The intelligence produced from interception is packaged and passed to the TTPS for follow up where necessary. This information produced from interception is used to find victims of kidnappings, prevent murders, disrupt terrorist plots and lead to the seizure of drugs, guns and other contraband.

I take the opportunity to highlight that the SSA is an Intelligence Agency and it engages in a far wider scope of activities than just intercepting communication. The SSA plays a critical role in the fight against criminal activity in Trinidad and Tobago. It gathers and analyses intelligence which is gathered in a number of ways, not limited to, the use of technology to intercept communications. The expenditure on the SSA cannot be linked solely to interception or arrests which is yet another frequent false statement advanced by the Opposition members, all of whom have Parliamentary oversight of these state operations and most certainly know better.

Madame Speaker, the population should be reminded that this is not the first time that false allegations regarding the intercepting of communications have been made by the member for Siparia. In 2010, the Strategic Services Agency (SSA), the Special Anti-Crime Unit of Trinidad and Tobago (SAUTT) and the Security Intelligence Agency (SIA) were accused, by the then Prime Minister, the member for Siparia, of spying on law-abiding citizens. The motive for such accusations were eventually revealed and these serious accusations were never shown to be factual or even pursued, once they served the unseemly purpose for which they were made.

Unfortunately, these false accusations had several adverse repercussions for the country, the Intelligence Agencies and their staff and even went on to cost the taxpayers millions of dollars in damages to be paid to wrongfully terminated officers.

Now, in 2022, the same individual, who is now Opposition Leader, has ventilated similar unsubstantiated allegations, not in Parliament where there is provision for oversight but on political platforms from which people are being woefully misled. These accusations are again directed at the law enforcement and intelligence services. In response to these recent allegations it must be first stated that the SSA only does legal interception of communication. Unlike 2010, however, this activity, as well as the other functions of the SSA, are governed by the SSA Amended Act 2016 and the Interception of Communication Act 2010 and its 2020 amendments.

Madame Speaker, the TTPS, TTDF and SSA strictly adhere to the Act when carrying out any intercept.

Interception of communication is used solely in the interest of national security, for the prevention and detection of serious crime, for the purpose of safeguarding the social and economic well-being of the state and for the purpose of giving effect to the provision of any international mutual assistance agreement.

The recent repeated allegations made by the Leader of the Opposition and members of the Opposition that Pegasus spyware is being used to spy on local journalists, magistrates, judges, and parliamentarians by the Government, the SSA and/ or the TTPS are completely false.

As I have stated, no law enforcement or private entity in Trinidad and Tobago is known to be in possession of Pegasus, nor are there records to indicate its purchase by any local entity. This having been stated here by me as Prime Minister and Chairman of the National Security Council, the Opposition Leader or her subordinates in this House must make available to the citizenry, the basis on which these unsettling allegations are being published locally and internationally, to the detriment of the people of   Trinidad and Tobago.

The Opposition has made allegations suggesting that the TTPS was spying on law-abiding citizens. This allegation was later published by the traditional media and on social media platforms. I responded to these allegations confirming that interception of communications is done but I made it abundantly clear that this is done within the parameters of the law and is aimed at those engaged in criminal activity. Notwithstanding this, the Opposition Leader persists with her claims, even advertising that she has documentary evidence of such wrongdoing by this Government. In this situation and under these circumstances the Opposition Leader is duty bound to bring it here for treatment by this Honourable House.

It is noted that the former Commissioner of Police (“COP”) indicated that under his tenure the TTPS did not purchase Pegasus or any other spyware directly from Israel. This former COP confirmed the procurement of an interception of communication solution under his tenure from 2018 to 2021. The procurement of this intercept device by the former COP was not authorized by the National Security Council for use by the TTPS and the COP was immediately instructed to provide the hardware and software to the SSA, which he did. Accordingly, the former COP, recently revealed that whilst the TTPS did procure intercept technology under his tenure it did not use it while he was Commissioner of Police and this was the context of his statement.

Accordingly, Madame Speaker, I reject the false narratives that, the State is using Pegasus, that the TTPS is conducting interception of communications outside of the suite provided and controlled by the SSA, under the laws of Trinidad and Tobago, and that there are any individuals being targeted by law enforcement for intercept who are not under suspicion of being involved in serious criminal activity.

The ill effects of these false narratives about intercept should not be underestimated and are very irresponsible as they undermine the fight against crime and the trust that we should repose in those charged with the responsibility of the State’s legal intercept resources.

I trust that this statement will serve to dismiss the irresponsible, false allegations of those who see benefit in their damaging actions and statements. It is hoped that it will be understood and accepted by the right and civic minded citizens of Trinidad and Tobago. I have provided this information and the assurances given as the Chairman of the National Security Council and the Prime Minister of the Republic of Trinidad and Tobago as I lead a government that respects the laws of Trinidad and Tobago.

Madam Speaker, I thank you for this opportunity to advise the national population.