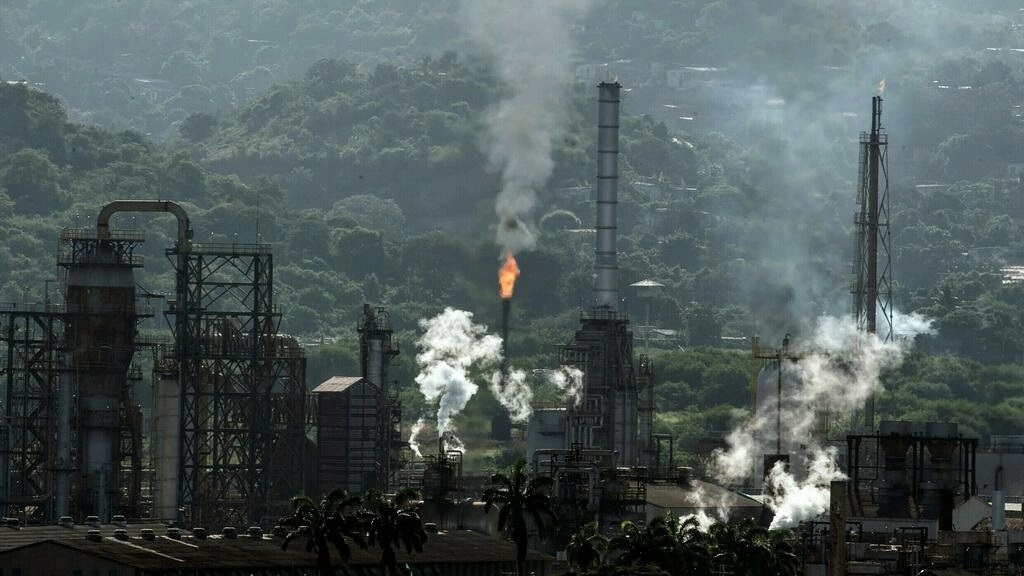 (France24, 9.Mar.2022) — Venezuela released two jailed US citizens on Tuesday in an apparent goodwill gesture toward the Biden administration, which has reached out to the regime of Nicolas Maduro as it looks for help in shutting off Russia’s oil revenues amid the war in Ukraine.

It also came just hours after Biden announced a ban on Russian oil and other energy sources, part of efforts to punish Moscow for its invasion of Ukraine.

Venezuela, a key ally of the Kremlin, has emerged as a potential alternative source of oil as Washington looks for ways to inflict economic pain on Russia while also limiting the pain for US consumers exposed to surging fuel prices.

As White House Press Secretary Jen Psaki told reporters on Monday, the purpose of the trip to Venezuela was to discuss a range of issues, including energy security.

The talks in Caracas marked a first since the countries severed diplomatic relations in 2019, a year after Maduro’s victory in a presidential election the West described as a sham. Then US president Donald Trump slapped crippling sanctions on Venezuelan oil in an attempt to starve Maduro’s regime of cash.

According to US media, Biden’s envoys floated the prospect of suspending at least part of those sanctions during the talks in Caracas, which were also aimed at gauging Maduro’s readiness to distance himself from Russia.

Can the West do without Russian oil and gas?

While the talks have raised eyebrows in Congress, “giving them plenty of publicity is certainly in Washington’s interest – if only to reassure the financial markets”, said Alexandre Baradez, an analyst at IG France, in an interview with FRANCE 24.

In recent days, the prospect of Western countries slowing or halting imports of Russian gas and oil has fuelled panic across the markets, pushing the price of Brent oil close to 140 dollars a barrel on Monday – its highest level in over a decade.

That figure “summed up the fears of investors regarding the war’s economic pact and the possibility of an embargo on Russian oil”, said Baradez.

“The psychological factor is crucial,” he added. “If investors see that the US is actively looking for an alternative to Russian oil, then they will be less likely to anticipate a worst-case scenario in which oil prices jump to 200 dollars or more.”

Can Venezuela make up for Russian oil?

Venezuela, home to the world’s largest known oil reserves, has enough fuel in its tank to prevent such a scenario – at least on paper.

“Last year, the United States imported around 650,000 barrels of Russian oil per day, roughly the amount they bought from Venezuela before imposing sanctions in 2019,” said Igor Hernandez, an expert in Venezuela’s energy sector at Rice University’s Baker Institute in Houston. “The US used Russia as a substitute for Venezuela. So if sanctions are lifted, one could imagine switching back to the situation prior to 2019.”

In practice, however, Venezuela’s capacity to rapidly meet US demands is limited by the country’s economic crisis and the effects of Washington’s sanctions, which have crippled its energy infrastructure.

Before US sanctions, Venezuela’s state-owned oil company PDVSA could produce over 1 million barrels per day. It will struggle to recover that capacity, not least “because it is highly constrained in its ability to use the revenue from oil exports”, Hernandez added, noting that the company is closely linked to Russian banks, which are also targeted by sanctions.

“They will probably need to reach out to the private sector to finance their activities,” said Hernandez, though cautioning that creditors will be reluctant to engage with a company that is already in arrears. “You’d also need credible signs from the government that it intends to honour PDVSA’s contracts, but the Maduro regime has a notorious reputation in this domain,” he added.

In substance, said Baradez, “the US would probably have to help rebuild Venezuela’s oil industry” – a highly sensitive proposition, considering the bipartisan opposition to Maduro in Washington.

The Biden administration has already faced strong criticism on Capitol Hill for its contact with Maduro, who is under US sanctions for human rights abuses and political repression.

“The White House offered to abandon those seeking freedom from Venezuela in exchange for an insignificant amount of oil,” Senator Marco Rubio, a Republican from Florida, said in a tweet on Tuesday.

Senator Robert Menendez, a Democrat and chairman of the Senate Foreign Relations Committee, urged the White House not to pursue a deal with Venezuela. Maduro, he said in a statement, “is a cancer to our hemisphere and we should not breathe new life into his reign of torture and murder”.

Before it can begin to breathe new life into Venezuela’s oil industry, the White House would still have to get Maduro – a staunch ally of Russian President Vladimir Putin – to agree to pile pressure on the Kremlin.

So far, Hugo Chavez’s successor has sided resolutely with Moscow, even “recognising the independence of [Ukraine’s] two separatist republics of the Donbas just hours after Putin”, said Maximilian Hess,  a political analyst at the Foreign Policy Research Institute in London.

“Maduro will start by assessing what Washington is willing to give him and his entourage,” said Hess. “If it’s not enough, he will stick to his alliance with Russia, which he still regards as his insurance policy, should the political and economic situation in Venezuela become too risky for him.”

In this respect, lifting US sanctions alone may not be enough to sway the Venezuelan president, Hess observed. “Maduro will be more receptive if Biden makes concessions on other issues, such as the legal cases in US courts targeting members of his government and PDVSA.”

Still, the prospect of sanctions relief would be hugely tempting for cash-strapped Venezuela, “allowing the country to divert part of its exports from China to the US, thereby slashing costs and improving public finances”, said Hernandez. And Caracas has comparatively little to lose should Moscow choose to retaliate, “since Russia has invested very little in Venezuela since 2019”.

Washington’s tentative rapprochement with Venezuela runs parallel with US efforts to finalise a new deal on Iran’s nuclear programme, which would pave the way for the resumption of Iranian oil exports and reduce Tehran’s dependence on Russia.

“If the United States can sway both Venezuela and Iran it would mark a huge diplomatic coup,” said Hess, noting that Washington has already dealt stinging blows to the Kremlin by persuading the likes of South Korea – “which traditionally cultivates friendly ties with Russia” –, Singapore and Switzerland to distance themselves from Moscow.