(Financial Times, Benedict Mander, 25.Jun.2018) – The collapse of the Argentine peso and the government’s struggle to tackle soaring inflation are causing disquiet among companies developing Vaca Muerta, one of the world’s largest deposits of shale oil and gas.

But the government has now capped the price at which companies producing oil in Argentina can sell to refineries, along with the price of petrol at the pump, to shield consumers from rising global oil prices and prevent inflation soaring even further.

Companies now must sell at prices considerably below the international level, which on Thursday was above $77 a barrel for Brent crude, the global benchmark. This, as well as the devaluation of the peso, is hitting profitability and forcing companies to reassess their plans in Vaca Muerta. 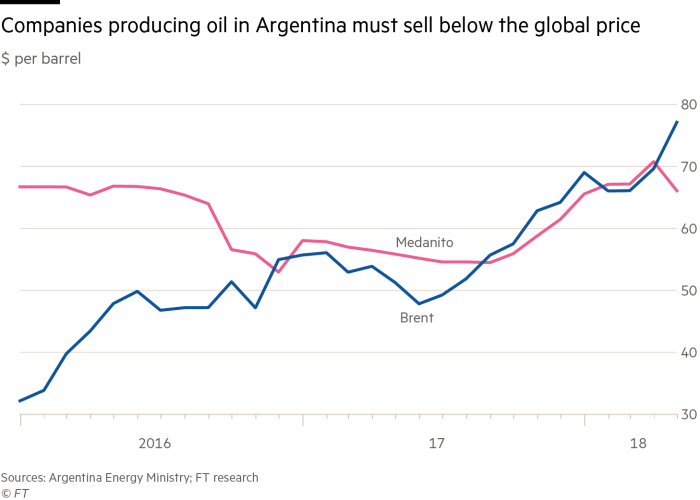 “Suddenly from moving in the right direction, it feels like the country is taking a step back,” said Anuj Sharma, chief executive of Phoenix Global Resources, a mid-sized oil company investing in Vaca Muerta. “If there’s one thing markets hate, it is uncertainty. It makes planning very difficult.” He added that it was hard to plan more than 3-5 months ahead.

As little as four years ago, the state oil company YPF estimated that the break-even oil price for wells in Vaca Muerta to be economically viable was about $80 a barrel. Wood Mackenzie, the energy consultants, now estimates the break-even price to be $56 a barrel. After the first well began producing commercially in 2013, Vaca Muerta is now producing 120,000 barrels a day, or more than 10 per cent of national production.

“Just 5 years ago Vaca Muerta was a dream. Now it is starting to become a reality. It is at an inflection point where you can actually make money drilling it,” said one senior executive whose company is investing in Vaca Muerta.

“You can argue that at $67-68 a barrel you can make more than the break-even price, but you are not obliged to drill Vaca Muerta. Elsewhere you get 75 or even higher if oil prices go up . . . if there’s no [price] visibility, it’s very hard to deploy billions into Vaca Muerta.”

With Javier Iguacel replacing Juan José Aranguren as energy minister as part of a shake-up last week, the government’s plans remain unclear. Mr Aranguren, a former executive at Royal Dutch Shell, was widely applauded by the private sector for increasing the tariffs that consumers pay for electricity and natural gas, which enabled the government to cut subsidies in its effort to rein in the fiscal deficit. But he is unpopular with voters.

How Mr Iguacel, a petroleum engineer who also has a private sector background, proceeds depends on a precarious political scenario for Mr Macri, who is seeking re-election next year. Tariff hikes — as well as a $50bn bailout from the IMF in response to the currency crisis — was one of the main motives for trade unions on Monday holding their third national strike since Mr Macri took power. 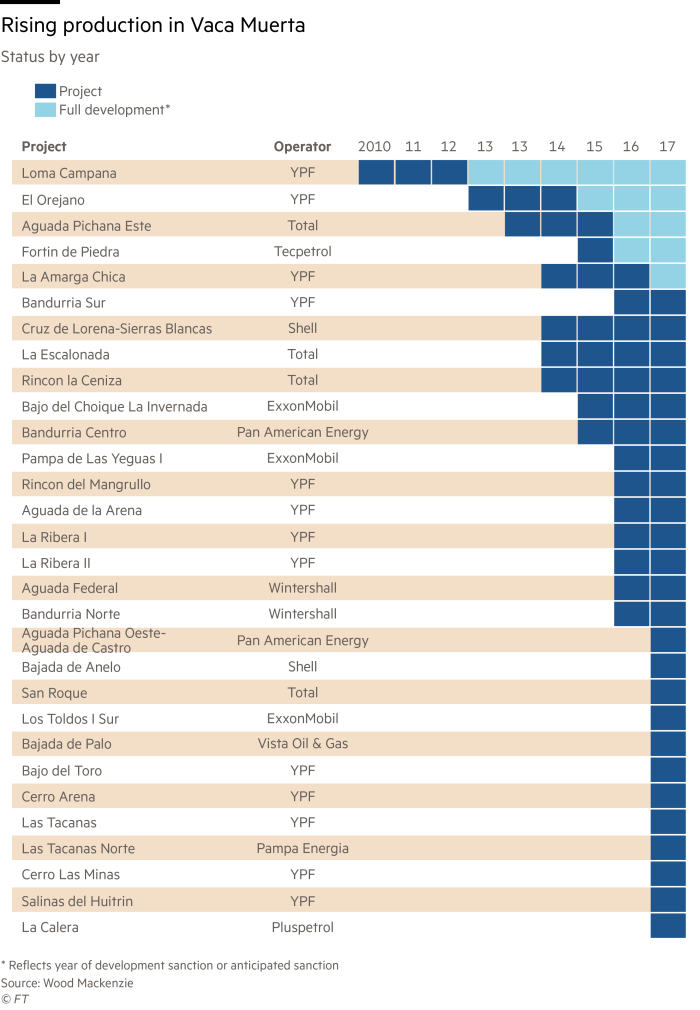 Freezing prices at petrol pumps may go some way to keeping voters happy, even if it is debatable what impact it might have on inflation, which is running at more than 25 per cent annually. But international companies are not keen on effectively financing Mr Macri’s “gradualist” economic reform programme, which seeks to cushion the impact of austerity on poorer Argentines.

“If prices remain uncoupled, that would be negative. Without doubt, investment would fall, production too, and we would have to import more,” said Daniel Gerold, an energy consultant in Buenos Aires. “If it becomes clear that prices do not follow clear rules or the law is not respected, even if costs are low in Vaca Muerta, investments are not going to come.”

Nevertheless, analysts are broadly optimistic about the prospects for Vaca Muerta, which has seen a sharp fall in costs in recent years, while production has jumped dramatically. Argentina might even have an oversupply of natural gas this summer, when demand is lower, said Amanda Kupchella, an analyst at Wood Mackenzie.

“There are a lot of things that just come with the territory in Argentina — like price controls, working with unions and so on. They are things that operators are used to dealing with,” said Ms Kupchella. “Productivity in Vaca Muerta is so good that it doesn’t seem to be keeping [investors] away . . . wells just seem to be getting better and better.”

Alejandro Bulgheroni, chairman of Pan American Energy Group, expects that in 2-3 years it will be as cheap to drill wells in Vaca Muerta as it is in the US.

“Let’s hope this is resolved and that we return to international prices,” said Mr Bulgheroni. Although it was a “difficult moment”, he recognised that under this government, negotiations had always ended in mutual agreements, with no impositions. “We have lived through much worse times.”