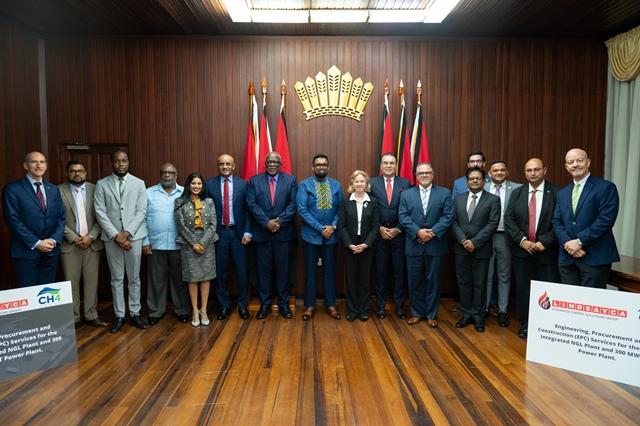 The historical signing of the contract for the US$759mn project took place at the Office of the President, Shiv Chanderpaul Drive. It was witnessed by His Excellency, Dr Mohamed Irfaan Ali, Vice President, Dr Bharrat Jagdeo and Prime Minister Brigadier (Ret’d) Mark Phillips.

During his remarks, President Ali said the transformational project will unlock enormous economic opportunities for Guyana.

He further noted the initiative will help to build the local capacity, particularly among the young people involved, especially during the initial stages of the project’s implementation.

“This is the largest project that we would have embarked on as a country and that brings with it its own challenges but it also gives us an opportunity to build capacity,” he said.

President Ali made it clear that the project does not slow down the government’s commitment to the Amaila Falls Hydro Power project. He said it instead forms part of the administration’s energy masterplan that is national and regional in nature.

Vice President, Dr Jagdeo reiterated the administration’s commitment to ensuring the project is developed along the highest international standards at the environmental, procurement, engineering, tendering, and evaluation stages.

“Given the importance of this project, its size and its transformative nature, we had to get this right and we believe that with this contractor LINDSAYCA/CH4 combination, that they will deliver on the project,” he asserted.

Dr Jagdeo said the project is in keeping with the PPP/C Government’s manifesto promise to deliver cheaper and reliable electricity to Guyanese and aligns with the country’s low carbon approach.

“This project will allow us to decarbonise the energy sector along with hydro coming soon and solar panels already tendered for to triple installed capacity and cut emissions by 70 per cent,” he pointed out.

The vice president emphasised the importance of timely delivery, quality work and staying within budget.

Meanwhile, the United States (US) Ambassador to Guyana Sarah-Ann Lynch stated that the groundbreaking project will unlock new opportunities for economic diversification.

The signing was done by the Permanent Secretary at the Office of the Prime Minister, Derrick Cummings and representatives of LINDSAYCA/CH4.

Once completed, the project is expected to deliver power at less than half of the current costs.

Project generation costs, taking account of payment for the pipeline, operations and maintenance, and capital cost recovery will total less than five US cents per kilowatt-hour.

Senior Minister in the Office of the President with responsibility for Finance, Dr Ashni Singh and Natural Resources Minister, Vickram Bharrat were also in attendance.