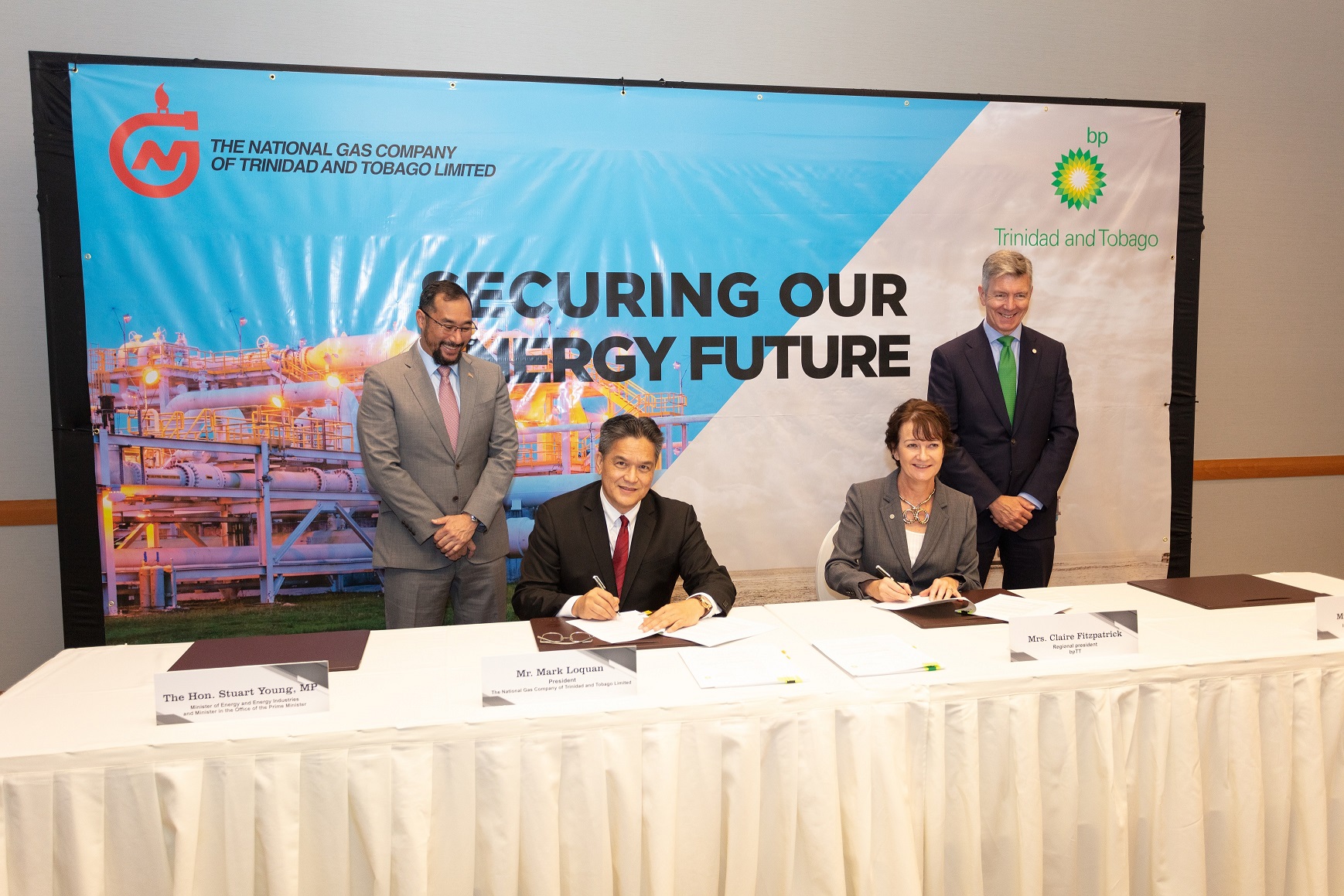 (TT MEEI, 23.Sep.2022) — The National Gas Company of Trinidad and Tobago Limited (NGC) has signed a milestone gas supply contract (“GSC”) with energy major, bp Trinidad and Tobago (bpTT), securing a future domestic gas supply for Trinidad and Tobago for the upcoming years. NGC’s President Mark Loquan and bpTT’s President Claire Fitzpatrick, signed the GSC at Hyatt Regency on Friday 23 September 2022. Also present to witness the signing was incoming bpTT President David Campbell and Minister of Energy and Energy Industries, Stuart Young. The signed contract is a renewal of the existing NGC/bpTT arrangement, and will govern the terms and conditions under which bpTT will continue to supply gas to NGC’s domestic customers.

Mr. Mark Loquan remarked that the contractual negotiations for future gas supply began in earnest several months ago, and that this signing represented a continued collaborative relationship between the two companies. The spirit of the negotiation process, according to the NGC President, was respectful, mature, productive and professional at all times, with both teams working assiduously to put this contract in place given its criticality to help drive upstream investments.

Ms. Claire Fitzpatrick shared the importance of the renewal of the contract to bpTT, stating that the contract will underpin future upstream investment decisions that the company was looking forward to taking and will contribute to the continued longevity of the country’s petrochemical industry. She reinforced the important relationship that bpTT and the NGC have maintained for decades and praised the teams involved in the negotiations for their diligent and efficient work.

Mr. Loquan thanked the NGC Board, and commended all involved at NGC for their professionalism and commitment.  Equally he thanked Claire Fitzpatrick, for her open communication during the process and the hard work by the bpTT team involved, with tight deadlines and timeframes involved. Mr. Loquan noted that the upcoming period will continue to be challenging for the Trinidad & Tobago energy sector even with this contract in place, due to continued decline of existing upstream gas fields, and other upstream investments which did not perform as planned. Energy efficiency, particularly gas utilised for power continues to be a critical focus for NGC. He also took the opportunity to wish Claire all the best in her next endeavours and to welcome David Campbell, bpTT’s incoming President, to Trinidad and Tobago.

bpTT is the largest supplier of gas to the domestic market and the renewal of this contract, allows NGC to secure a significant volume of gas for the coming years to help fulfil domestic demand. While neither Mr. Loquan nor Mrs. Fitzpatrick could disclose the specific details of the contract as these are governed by a confidentiality agreement, they acknowledged the timeliness of the signing, and the resounding commitment of both to the success of Trinidad and Tobago’s energy sector.

The Minister of Energy and Energy Industries and Minister in the Office of the Prime Minister, The Honourable Stuart Young, M.P., was present to witness the signing of the gas sales contract and commented, “…this is another critical milestone in securing the future of Trinidad and Tobago’s energy sector and ensuring our energy security. NGC has stayed the course and it cannot be over emphasised how significant it is that we have negotiated and secured a future supply of gas from bpTT in advance of the expiry of the current arrangements. I congratulate NGC on securing a contract for continued supply of natural gas for the downstream.”  He acknowledged bpTT’s clear commitment to tangible investment in the upstream. “The signing of the GSC signals that there is significant value to be extracted from the country’s hydrocarbon resources for the benefit of all citizens and that bp remains committed to Trinidad and Tobago as an investment in its group of global assets.” He expressed that the Government of Trinidad and Tobago will continue to work closely with all stakeholders toward building the resilience and sustainability of the nation’s energy sector, which remains the bedrock of the nation’s economy.