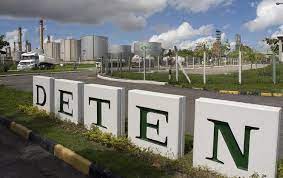 (Petrobras, 5.Jul.2022) — Petrobras, following up on the release disclosed on 04/28/02, informs that it has today finalized the sale of its entire interest (27.88%) in Deten Química S.A., located in the industrial complex of Camaçari, in the state of Bahia, to the company Cepsa Química S.A., which already has an indirect interest in Deten, of 69.94%.

After compliance with all the preceding conditions, the operation was concluded on this date, with the payment of R$514mn in cash to Petrobras, an amount that reflects the purchase price of R$585mn, adjusted for monetary correction, dividends received, and the deduction of the deposit amount paid to Petrobras on the date of signing the share purchase agreement.

This disclosure to the market is in accordance with Petrobras’ guidelines for divestments and with the special regime for divestment of assets by federal mixed economy companies, provided for in Decree 9,188/2017.

This operation is aligned with the optimization of the portfolio and the improvement of the company’s capital allocation, aiming to generate value for its shareholders.

Deten manufactures and sells the main raw materials for the domestic and commercial cleaning segment in Brazil, being the only national producer of Linear Alkylbenzene (LAB), precursor of Linear Alkylbenzene Sulfonate Acid (LABSA), of which it is also a manufacturer. Its annual production capacity is 230,000 tons of LAB and 120,000 tons of LABSA. Additionally, the company produces 10,000 tons/year of Heavy Alkylate (HLA), which is mainly used to produce thermal fluids, greases, lubricant additives, and textile oils.

Cepsa Química is the world leader in the sector in which it operates and leads world production of LAB, the main raw material used in biodegradable detergents, being a pioneering player. It is also number one in the production of cumene, an intermediate product used in the manufacture of phenol and acetone, which are the main raw materials for the manufacture of engineering plastics, and of which it is the second largest producer worldwide. Cepsa Química currently employs more than 1,000 people and has plants in seven countries around the world (Spain, Germany, Brazil, Canada, China, Indonesia and Nigeria).