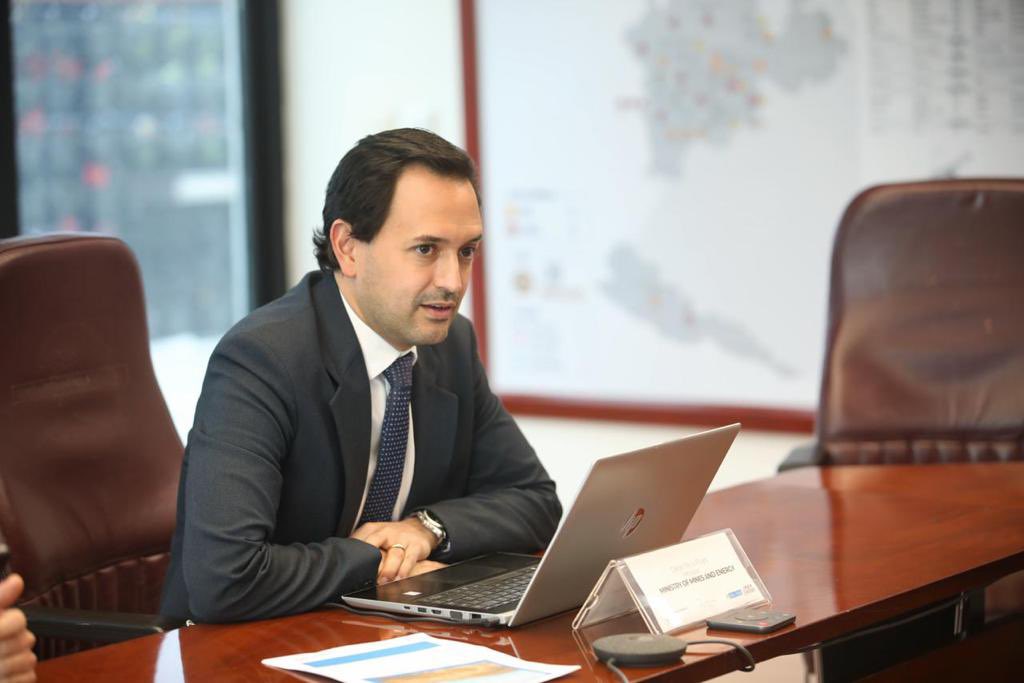 Energy Analytics Institute (EAI): What were some of the most significant achievements accomplished under your tenure as Colombia’s Mines and Energy Minister?

Diego Mesa: I think we had a significant effort to create a policy framework to incorporate variable renewable energy at a massive scale. When you look at the results, we started with 28 megawatts back in 2018. As a result of the three auctions that we’ve done, we’ve awarded contracts for projects that are equivalent to 2,800 megawatts. So, we’ve multiplied that times 100.

We’ve also left the first two pilots for geo-thermal, the first forestry biomass project for generation of electricity in Colombia and we’re launching on 18 Mar. the first of two pilots for green hydrogen with Ecopetrol and Promigas. In addition to that, we’ve launched the hydrogen road map for both low and zero emission hydrogen, and we’ve launched the road map for offshore wind. Yesterday, we announced the first project with Copenhagen Infrastructure Partners offshore Barranquilla, which entails a project for about $1bn and 350 megawatts. So, on that front, I’m very satisfied.

Another part of energy transition is sustainability and we’re also going to leave Colombia as a leader in Latin America in electric vehicle (EV) sales since 2019 with double digit growth in 2020 and 2021. And finally on oil and gas I’m very happy as well with the results. We went from not signing any new exploration & production (E&P) contracts in five years up to 2018 to signing 69 new E&P contracts.

So, one thing that I stress today is that Colombia is going to start a drilling campaign in deep waters offshore on 29 Mar., [the Gorgon-2 well to be drilled by Shell Colombia and Ecopetrol], so another milestone we’re very happy about.

RELATED STORY: Ecopetrol Eyes Transmission Opportunities in the Americas, Especially the US

Energy Analytics Institute (EAI): We’ve still not seen any significant details related to the two fracking pilots. Did the combination of the pandemic and then social unrest have an impact on slowing progress?

Diego Mesa: The pandemic had an impact, but we’re very close, so the submission for the environmental license for the first pilot was sent to the environmental agency a few weeks ago. So, we should be hearing from them in the next couple of weeks, either between March and April when they should have a decision. We hope to have the same for the second pilot before the end of the government of [Iván Duque Márquez]. If the first one is approved, the goal is to have drilling start before we leave office in five months.

Diego Mesa: I do think it makes sense. We didn’t have economic offers in the previous round. I think it was very clear at the end that there were a couple of regulatory bottlenecks that we’re looking at right now, so the Mining and Energy Planning Unit (UPME by its Spanish acronym), which is the one responsible for the tender, has hired a very well experienced Mexican firm that has done this in their country. So, we’ll continue to look at what we need to change but ideally we will leave the process very well advanced before we leave the administration.

Energy Analytics Institute (EAI): What has the Duque government done so that the advances in the energy space are not easily erased or walked back? Have steps been taken to make this Colombian policy and not just a specific policy under a specific government?

Diego Mesa: We’ve done a few things. We’ve made sure that a lot of the policy framework is embedded in legislation. So, if you want to reverse this, you have to go to Congress and you have to get a majority to undo what we’ve done. But, I think that would be [foolish] to do just because you know it’s proven that it’s attracting a lot of investment from foreigners and from Colombian companies, and I think this is one of the policies that is less controversial across different political parties. So, I think it will continue. I mean that the concern could be that someone comes in and changes the rules for investment and I think that will be very worrying, but Colombia is very well known for having stability from a law point of view and legislation point of view. So, I think the ground work has been laid and it’s just a matter of continuing to push with these policies.

Energy Analytics Institute (EAI): Colombia has a very strong anti-extractive movement and related social unrest. If companies can’t find more oil and gas, Colombia will have to continue to import the energy it needs. How does Colombia continue to move forward its extractive industries given the frequent outbursts?

Diego Mesa: I think [the social unrest] that happened last year was a combination of different variables. Yes, people were not well informed about the tax reform that was proposed. I think the media had a big role to play in there because we didn’t do a good job of explaining to people what it meant because this was a reform that was benefiting mostly the most vulnerable families in Colombia with cash transfers, getting back VAT payments, etc. But then also people have been locked down for almost a year now because of Covid so people were tired and then you have the populist and their discourse trying to get the country up in flames, so it was a combination.

I don’t think that there was any relationship with an anti-extractive sentiment whatsoever. In fact, when you look at what we’re doing, the pilots, the populations that reside in that area, some of them are pro-unconventional development and others are apathetic because they just care about getting their day-to-day life going and making sure they can put bread on their tables and so forth.

We are in a very privileged position that we are self-sufficient in power and in oil and gas and we should continue to protect that for Colombia because that’s a competitive advantage today but also it’s an issue of national security.