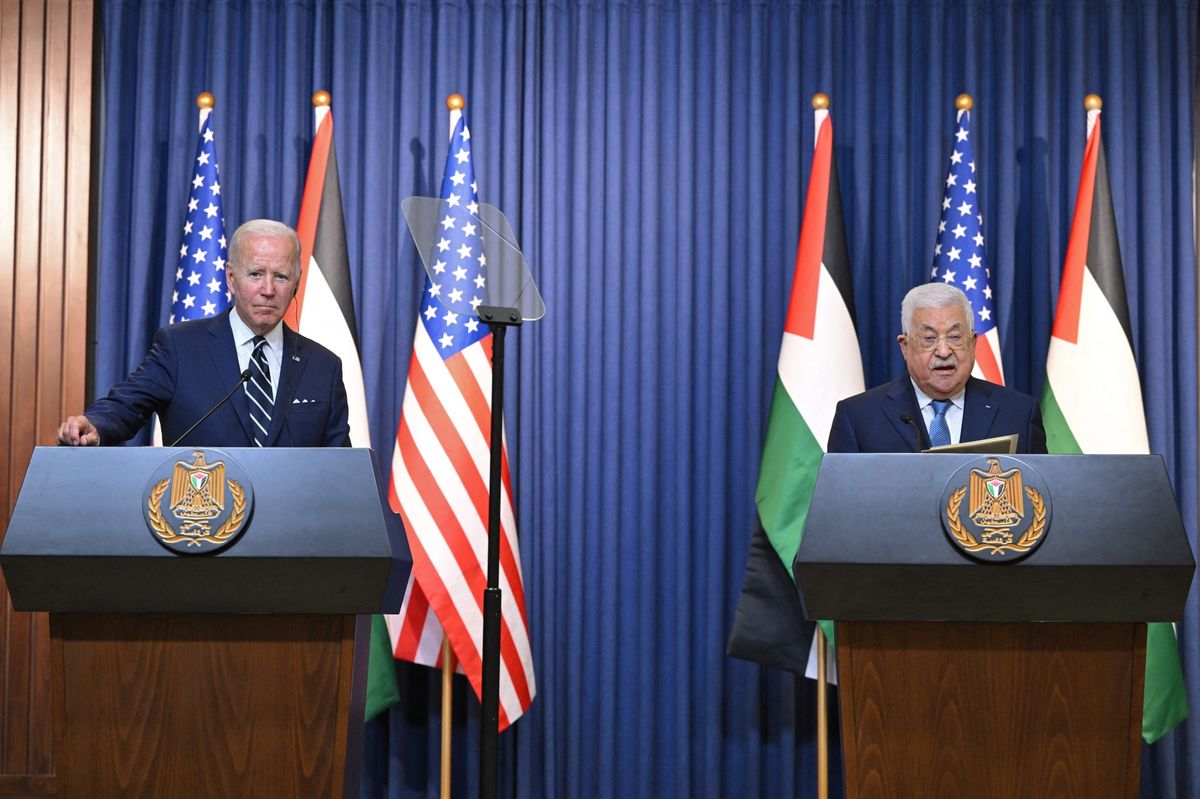 (The White House, 15.Jul.2022) — What follows are remarks from a joint press statement by US President Joe Biden and President Abbas of the Palestinian National Authority.

PRESIDENT ABBAS:  (As interpreted.)  Formidable President Biden, we welcome you as a dear guest of Palestine, in the city of Bethlehem, the cradle of our Lord Jesus Christ, on your official visit, which expresses your interest in achieving peace in the land of peace.

And today’s meeting, our meeting, was an opportunity to discuss consolidating our military relations between the countries and peoples, and to review what the U.S. can contribute to prepare the atmosphere for a political horizon for a just, comprehensive, durable peace.

We have stressed to Mr. President Biden on the importance of reestablishing the foundations upon which the peace process was based — that is based on the international legitimacy resolutions and on the basis of the two-state solution along the 1967 borders.

Mr. President, after 74 years of the Nakba displacement and occupation, isn’t it not the time for this occupation to end and for our steadfast people, again, to gain their freedom and independence, and for the hopes of our young men and women, whom we cherish and trust their creativity, to achieve a promising future without occupation?

In this regard, we say that the key to peace and security in our region begins with recognizing state of Palestine and enabling the Palestinian people to obtain their legitimate rights in accordance with international legitimacy resolutions, and ending all the permanent status issues, including the Palestinian refugees issue.

And the way to that begins with ending the Israeli occupation of our land, the land of state of Palestine, with East Jerusalem as its capital, on the 1967 borders.

Mr. President, we have respected the resolutions of international legitimacy and signed agreements, and we have committed ourselves to renouncing violence and fighting terrorism in our region and the world.

We look forward to steps from the U.S. administration to strengthen bilateral relations by reopening the U.S. consulate in East Jerusalem, removing the PLO from the U.S. terrorist list. We are not terrorists. And also, we look forward to reopening PLO office in Washington. And we are ready to work within the framework of partnership and cooperation in order to remove any obstacles to achieving that.

Mr. President, we look forward to the efforts of your administration to turn the page on the Israeli occupation of our land and the acts of racial discrimination, apartheid against our people; and to stop unilateral actions that undermine the two-state solution.

We look forward to these efforts to stop settlement and settler violence; and respect of the historical situation in the Islamic and Christian holy sites and the Hashemite custodianship; and stopping the expulsion of Palestinians, demolishing houses, homes, and storming the cities, villages, and camps; and stopping the daily killing and arrests on daily basis; and holding the killers of the martyr journalist, Shireen Abu Akleh — they need to be held accountable.

Because the continuation of all of that will lead to escalation on the one hand and loss of hope for a better tomorrow on the other.

Mr. President, if Israel wants to be a compliant state, it cannot continue to act as a state above law. And this calls for Israel to end its occupation of the land of state of Palestine with East Jerusalem as its capital on the 1967 borders.

Only then, Israel will be accepted to live in peace, security, and good neighborhood with the countries and peoples of the region based on the Arab Peace Initiative. The opportunity for the two-state solution on the 1967 borders may be available today only, but we don’t know what will happen later.

Therefore, I take this opportunity on the occasion of the visit of Your Excellency to the region to say that I extend my hand to the leaders of Israel to make peace for the (inaudible). And this has happened much before. Before Oslo Accords, we have been extending our hands for peace with all the Israeli leaders for a better future for the future generations and for all the peoples of the region.

Mr. President, we welcome you again. And our confidence in you and your administration is very great. And we assure you of our readiness to work with you, hand in hand, in order to achieve comprehensive and just peace based on international legitimacy and the Arab Peace Initiative and the signed agreements between us and Israel.

There are agreements that we need to respect in a way — in a manner that guarantees security, peace, stability, and lasting prosperity for all the countries in the region.

Mr. President, peace begins with Palestine and Jerusalem. From here, peace starts. We extend our hands for peace and to work with you, Mr. President, to achieve it.

Peace be upon you. (In Arabic.) Thank you.

PRESIDENT BIDEN: Mr. President, President Abbas, thank you very much and to your colleagues with whom I had the opportunity to meet as well.

And it’s good to see you again, my friend. We’ve known each other for a long time. And I’m very proud to be with you today as President of the United States. And I can — we can count ourselves among the earliest supporters of a two-state solution.

As I stand with you today, now as President of the United States, my commitment to that goal of a two-state solution has not changed in all these years.

Two states along the 1967 lines, where mutually agreed-to swaps, remain the best way to achieve equal measure of security, prosperity, freedom, and democracy for the Palestinians as well as Israelis.

The Palestinian people deserve a state of their own that’s independent, sovereign, viable, and contiguous. Two states for two peoples, both of whom have deep and ancient roots in this land, living side by side in peace and security. Both states fully respecting the equal rights of the other citizens. Both peoples enjoying equal measure of freedom and dignity. That’s what this is fundamentally all about.

Every person has a right to be treated with dignity. It’s simply basic. I know that the goal of the two states seems so far away while indignities like restrictions on movement and travel or the daily worry of your children’s safety are real and they are immediate.

The Pales- — the Palestinian people are hurting now. You feel — you can just feel it, your grief and frustration. In the United States, we can feel it.

But we’ve never give up on the work of peace. You know, there must be a political horizon that the Palestinian people can actually see or at least feel. We can’t allow the hopelessness to steal away the future that so many have worked toward for so long.

So even if the ground is not ripe at this moment to restart negotiations, the United States and my administration will not give up on trying to bring the Palestinians and Israelis and both sides closer together.

I do believe that in this moment when Israel is improving relations with its neighbors throughout the region, we can harness that same momentum to reinvigorate the peace process between the Palestinian people and the Israelis.

I recognize how hard all these challenges must be and will be to work through. Above all, there must be an end to the violence that has devastated too many families.

It’s heart-wrenching that so many Palestinians and Israelis have lost their life just this year. And the United States has suffered loss as well, including the killing of Shireen Abu Alkeh — Alkehli [Akleh].

Her death is an enormous loss to the essential work of sharing with the world the story of the Palestinian people.

I hope that her legacy — her legacy will inspire more young people to carry on her work of reporting the truth and telling stories that are too often overlooked.

President Abbas, in the past, we met in Ramallah, but today, in the Palestinian city of Bethlehem, a place of enormous
significance in my faith as well — the birthplace of Jesus Christ.

This is the city that lives in the hearts of millions of Christians and is a reminder of God’s great gift to the world and our renewed and redemption in Christ.

Muslim and Jews also have an intense and deep connection to this land, particularly in Jerusalem.

Jerusalem is central to the national visions of both Palestinians and Israelis — to your histories, to your faiths, to your futures.

Jerusalem must be a city for all its people — its holy sites preserving the status quo, with the Hashemite Kingdom of Jordan continuing to serve as custodian.

And throughout this Holy Land, which is filled with so many places of meaning and significance to Muslims, Christians, and Jews, we must all be free to practice our faiths in peace, in safety, and in dignity.

We cannot wait for a peace agreement to be reached or for every issue to be resolved to deliver on the needs of the Palestinian people that exist today, as I speak.

The best way to feed the flame of hope is to demonstrate that things can be better. And, President Abbas, the United States is a partner in this work to improve the day-to-day lives of the Palestinian people.

That’s why, when I came to office, I reserved the policy — I reversed the policies of my predecessor and resumed aid to the Palestinians — more than a half a billion dollars in [since] 2021.

That’s support for the economic development of the Palestinian people, to strengthen Palestinian security, to provide food for people to eat, to respond to the pandemic, including donating more than one million doses of COVID-19 [vaccine] to the West Bank and Gaza.

It also includes more than $400 million in humanitarian assistance to Palestinian refugees through the United [Nations] Relief and Works Agency — the UNRWA.

And today, I’m announcing the United States is going to provide an additional $200 million to the UNRWA so it can continue its vital work of helping the most vulnerable Palestinians, especially Palestinian children.

Earlier this month, and I — we decided — and this morning, I announced an additional $100 million in support of healthcare services for Palestinians throughout East Jerusalem Hospital Network.

We were — we were engaging with Israel around ways
to spur greater Palestinian economic growth, including by implementing 4G mobile networks, increasing the supply of renewable energy, improving freedom of movement for Palestinians, both people and goods.

These are the kinds of issues that progress can make life better for people right away, and we should be about it right away.

And the Palestinian Authority has important work to do as well, if you don’t mind my saying.

Now is the time to strengthen Palestinian institutions, to improve governance, transparency, and accountability.

All of this work is critical. And it will help build a society that can support a successful, democratic future, and a future Palestinian state. And the United States will work with you, President Abbas, at every step.

So thank you again for welcoming me and my delegation — the Secretary of State, National Security Advisor, and others — to visit with you.

I thank you all very much. And may God protect us all. Thank you, Mr. President.