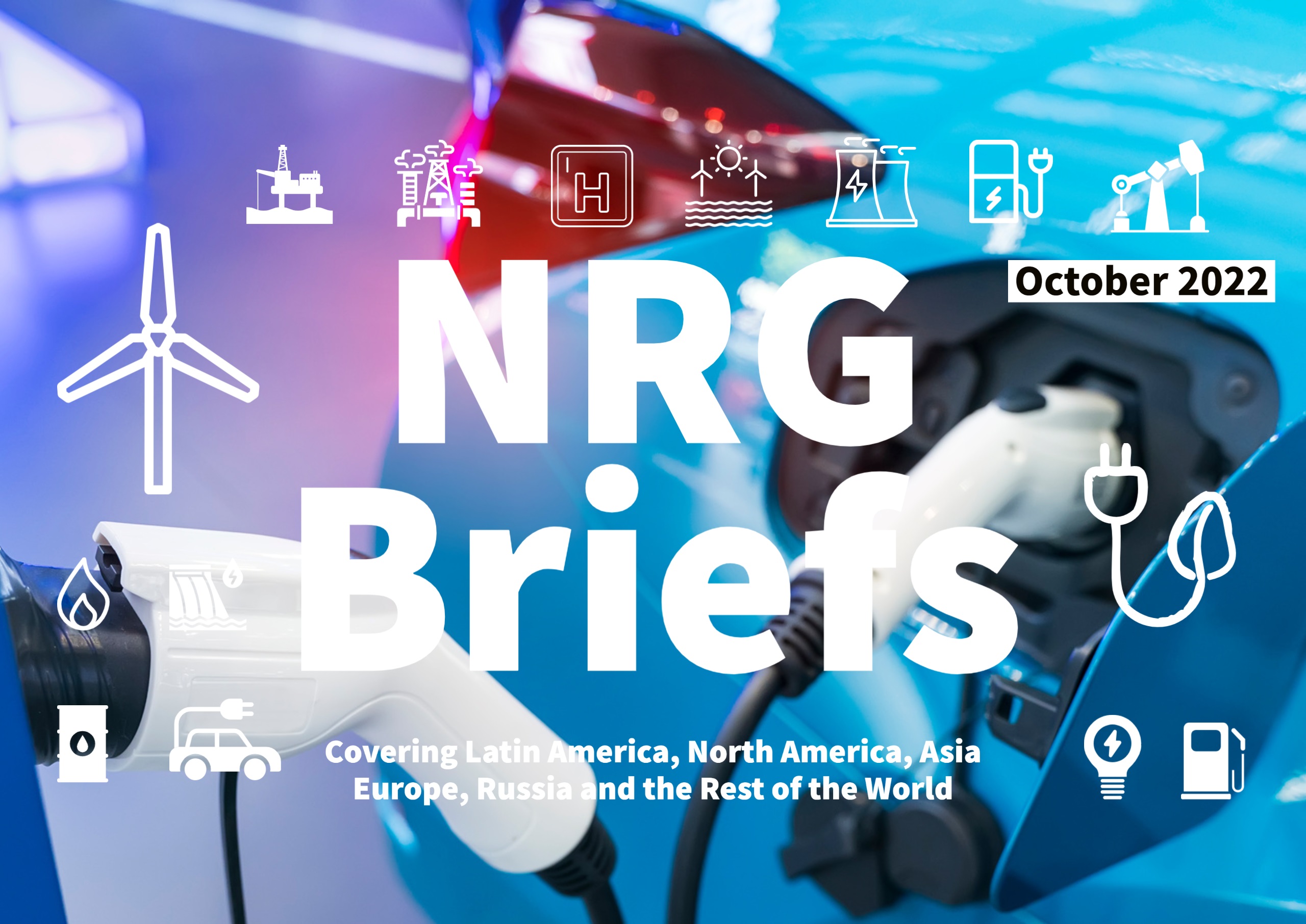 (Energy Analytics Institute, 31.Oct.2022) — Energy briefs as well as others related to finance and politics during October 2022 including US President Joe Biden congratulating Luiz Inácio Lula da Silva on his election victory in Brazil over Jair Bolsonaro; Equinor inviting analyst to provide estimate for the third quarter of 2022 adjusted results; Europe being in the midst of a full-blown energy crisis with prices having surged to new record highs; Guyana’s President Irfaan Ali meeting with the Minister of Energy Affairs of the State of Qatar HE Eng. Saad bin Sherida Al-Kaabi; and more.

— Equinor invited analysts w/ coverage of the co. to provide estimates for the 3Q:22 adjusted results, the co. revealed 7 Oct. 2022 in a stmt on its website. The co. plans to publish its  3Q:22 financial results on 28 Oct.

— Rishi Sunak is set to replace Liz Truss and become the UK’s third Prime Minister to date in 2022, the young British citizen of Asian parents announced 23 Oct. 2022 in a post on Twitter.

— The British Conservative Party has defeated Labour’s bid to ban fracking amid farcical scenes in the House of Commons, media outlet The National News reported on 19 Oct. 2022.

— The North Sea Transition Authority (NSTA) will offer an add’l 34 blks in the 33rd Oil and Gas Licensing Round. The blks will be available in the Central North Sea and Southern North Sea, and the extra acreage is available following further consultation w/ the MoD, the NSTA revealed 13 Oct. 2022 in a stmt on its website. The round opened on 7 Oct. 2022 and will close on 12 Jan. 2023.

— “Europe is now in the midst of a full-blown energy crisis with prices having surged to new record highs and the EU pledging gas and electricity demand curtailments,” S&P Global wrote 2 Oct. 2022 in a post on LinkedIn. “The winter months will soon challenge the sector’s resilience,” the agency wrote.

— After most nail-biting election in Brazil’s recent history, Luiz Inácio Lula da Silva will return for a third term as president after beating Jair Bolsonaro, the right-wing populist incumbent, in a run-off on 30 Oct., The Economist reported 31 Oct. 2022. With nearly all votes counted, the left-leaning Lula, as he is known, won 50.9% to Mr Bolsonaro’s 49.1%, the tightest margin since Brazil’s return to democratic elections in 1989. It is the first time that an incumbent has failed to win re-election, the magazine reported.

— “I send my congratulations to Luiz Inácio Lula da Silva on his election to be the next president of Brazil following free, fair, and credible elections,” US President Joe Biden announced 30 Oct. 2022 in an official stmt from The White House. “I look forward to working together to continue the cooperation between our two countries in the months and years ahead.”

— Petrobras, regarding the news in the media about the readjustment of fuel prices, announced 14 Oct. 2022 in an official stmt that it “maintains its commitment to the practice of competitive prices and in balance with the market, while avoiding the immediate pass-through of external volatility and of the exchange rate caused by circumstantial events.”

— Ecopetrol S.A. (BVC: ECOPETROL; NYSE: EC) said that together w/ the subscription of the Declaration of the Nation as majority shareholder and according to the established procedure, the current representatives of the hydrocarbon producing departments in which Ecopetrol operates, signed a document through which they unanimously agreed to nominate Mrs. Sandra Ospina Arango as their candidate to the BODs, the co. revealed 7 Oct. 2022 in an official stmt.

— Rising fuel prices have been a worrisome issue across LatAm, often leading to social unrest, CGTN reported on 5 Oct. 2022, adding that Colombia has had some of the cheapest fuel in the region only behind Venezuela and Bolivia. However, now, the new gov’t of Gustavo Petro in Bogota says the price needs to rise but carefully.

— ExxonMobil reports that two FPSO vessels, Liza Destiny and Liza Unity, are produced above design capacity and achieved an average of nearly 360,000 b/d in the 3Q:22. Additionally, two new discoveries offshore Guyana announced this wk bring the total to more than 30 discoveries on the co.’s Stabroek Block in Guyana to date. A third project, Payara, is expected to start up by YE:23, and a fourth project, Yellowtail, is expected to start up in 2025. ExxonMobil is also currently pursuing environmental authorization for a fifth project, Uaru, the co. announced 28 Oct. 2022 in an official stmt. Lastly, by 2030, we expect Guyana’s oil production capacity to be more than 1 MMb/d.

— Guyana’s President Irfaan Ali met w/ the Minister of Energy Affairs of the State of Qatar and Managing Director and CEO of QatarEnergy, HE Eng. Saad bin Sherida Al-Kaabi, and his delegation at the Office of the President to discuss issues related to potential collaboration between the govts of Guyana and Qatar in the areas of energy, food, infrastructure and aviation, Guyana’s Ministry of Natural Resources reported 12 Oct. over Instagram.

— Aris Mining Corporation (TSX: ARIS) (OTCQX: TPRFF) announced effective 1 Oct. 2022, Mónica de Greiff was appointed as an independent member of the BODs, and as Chair of the Sustainability Committee of the Board.

— Pemex will host its 3Q:22 webcast to discuss operating and financial results for the qtr on 28 Oct. 2022, the co. announced in an official stmt.

— Wintershall Dea inked a deal w/ Hokchi Energy, the Mexican subsidiary of Pan American Energy, to buy a 37% non-operated participating interest in the Hokchi Block, w/ a conditional option to increase its participation up to 40% at a later stage, Wintershall revealed 24 Oct. 2022 in an official stmt.

— Trinidad and Tobago’s Minister of Energy and Energy Ministers Stuart Young said on 5 Oct. 2022 over Instagram that he was offering himself to “the PNM for the position of Chairman of the Party.”

— The Iranian oil minister Jawad Owji said that the first refinery built by Iran in an overseas country is El Palito refinery in Venezuela, Mehr News reported 16 Oct. 2022. The minister said the refinery has the capacity of refining 100,000 b/d of crude oil from the country’s fields.

— Gasoline shortages have begun to hit the Northeast, kicking pump prices higher, as Russia’s invasion of Ukraine disrupts energy supplies across Europe and elsewhere. New England states and New York are dependent on imports of the fuel, as infrastructure constraints isolate them from Gulf Coast refineries that export heavily to LatAm, LinkedIn reported on 28 Oct. 2022. Even as prices have continued to moderate in much of the rest of the US, they jumped as much as $0.10/gal overnight on Wednesday from Maine to New York.

— CERAWeek 2023 will take place in Houston, Texas from 6-10 Mar. 2023 under the theme “Navigating a World in Upheaval: Energy, Climate and Security.”

— Comstock Resources, Inc. (NYSE:CRK) changed the date and time of its previously announced earnings release and conf. call for the 3Q:22. The co will now release results on 1 Nov. 2022 after the mkt closes and host its qtrly conf. call at 9am CT on 2 Nov. to discuss the results.

— IMF‘s “Promoting Inclusive Growth in the Middle East and North Africa: Challenges and Opportunities in a Post-Pandemic World,” published on 13 Oct. 2022 is available here.

— On 6 Oct. 2022 the FERC conducted its first in-person tech conf. at the commission’s HQs in 2.5yrs w/ a full day look at transmission planning and cost mgmt (AD22-8-000), it announced on its website. FERC, or the Federal Energy Regulatory Commission, is an independent agency which regulates the interstate transmission of natgas, oil, and electricity. FERC also regulates natgas and hydropower projects.