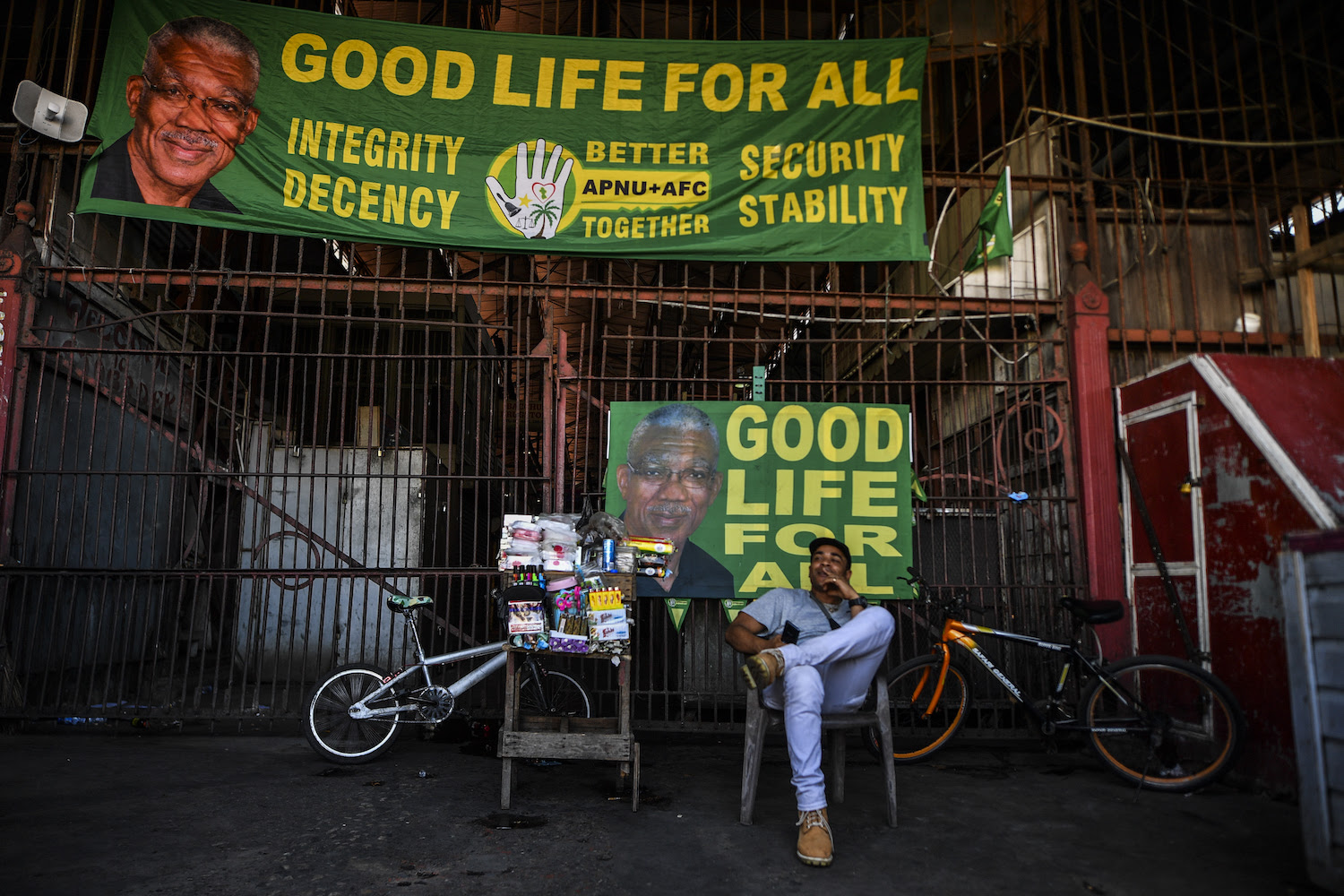 (Foreign Policy, 16.Dec.2022) — Most South American economies have grown sluggishly this year. But Guyana has been an outlier—both in the region and the world at large. The small country is on track to boast the globe’s highest GDP growth rate of 2022—a staggering 57.8 percent—thanks to steadily rising output from an offshore field where ExxonMobil struck oil in 2015. It took a few years for the company to set up pumping operations in the area, which only produced its first barrels of oil in December 2019.

Guyana’s oil reserves are so vast that the country’s daily production is expected to rise from the current level of around 360,000 barrels a day to around 1 million barrels per day by 2027, dethroning Kuwait as the country with the highest level of oil production per capita worldwide.

Guyana was a relatively poor country before it struck oil seven years ago. Since then, the question of how these riches will be distributed has hung over the country’s politics. Many were worried that, without proper guardrails, Guyana would fall victim to the so-called resource curse, whereby an abundance of natural resources disincentivizes countries from developing other sectors and creates circumstances ripe for corruption. In 2016, government authorities agreed to a deal with ExxonMobil and partner firms that allots Guyana an unusually low cut of profits from an oil-rich exploration zone called the Stabroek Block.

“It’s the most favorable [for oil companies] I think I’ve ever seen in the industry, anywhere,” Tom Mitro, a fellow at Columbia University’s Center on Sustainable Investment and former Chevron financial officer, told Bloomberg.

Each quarter, the companies pay a 2 percent royalty fee to the government on revenue from oil produced in the block. They are allowed to devote 75 percent of that revenue to paying their previous and ongoing exploration costs, and the remainder is split 50-50 between the companies and the state. The range of costs the companies can deduct before giving profits to the government is unusually large, Mitro and other analysts have said. ExxonMobil told Bloomberg that the deal was consistent with agreements in other countries at such an early stage of oil exploration.

Dissatisfaction over how the largely Afro-Guyanese-backed government handled Guyana’s oil contracts was a key reason it was voted out of office in 2020, Guyanese journalist Kiana Wilburg told Foreign Policy. Now, the largely Indo-Guyanese-backed administration that replaced it is responding to the criticism by adjusting its preliminary terms for a new auction of oil leases that kicked off last week and will run through May. The areas being auctioned lie between the Stabroek Block and the coastline.

The draft rules include a 10 percent royalty fee to the government, set the cost recovery portion of revenue at 65 rather than 75 percent, and introduce a 10 percent corporate tax. After cost recovery, profits are still divided 50-50.

In late 2021, Guyana’s government created a sovereign wealth fund with oil revenues and soon afterward approved plans to spend nearly all of its holdings at the time. The government says it put around $600 million from the fund toward its 2022 budget, set to be around 44.3 percent higher than last year’s.

“Speaking to several young people there is an optimism about their futures in Guyana rather than what has been for decades a cynicism and an overwhelming impulse to migrate,” the editorial board of Guyana’s Stabroek News wrote in July about the oil boom’s impact on the local labor market.

Still, transparency advocates, opposition politicians, and investigative reporters in the country have pressed the government—so far with little success—to be more open and systematic about the way it is spending its oil money, including the $600 million earmarked for this year.

“Ideally, the proceeds should be geared towards orienting the economy away from oil and gas so that in 30 years when the industry … [has] to be dismantled, agro-processing, high-quality manufacturing and financial and technological services will be the pre-eminent features,” the Stabroek News wrote in an editorial in April.

The government says it is beginning to put such a transformation in motion. In July, it published a low-carbon development strategy that includes plans to invest in forest maintenance, tourism, and sustainable housing.

The strategy is part of Guyana’s answer to environmentalist critics who say it should not be drilling for oil at all. The other part of its argument hinges on historic injustices. President Irfaan Ali estimates that Guyana has around 30 years before global demand for oil dries up and argues that oil sold until then should benefit poorer countries most vulnerable to climate change. Barbadian Prime Minister Mia Mottley, who was a star at the most recent United Nations Climate Change Conference, has made a similar argument, and Barbados is now preparing its own auction for offshore oil and gas leases.

Meanwhile, some Guyanese continue to scrutinize their country’s oil dealings. This month, social media users and opposition members criticized ExxonMobil’s placement of billboards across the country that read: “Guyana receives 52 percent of all profits from Stabroek Block.” There was no mention of the 75 percent of revenue that goes to oil company costs. An opposition member and former head of the country’s environmental protection agency called the billboards “propaganda to mislead and silence our people’s bonafide concerns.”

The terms of Guyana’s newest contracts may yet change. Mitro told Foreign Policy that based on what has been published, the new draft terms are unusual in that they contain no provisions for periods of time in which oil is especially profitable. Such a clause could hypothetically kick in during an oil price spike like the one that followed Russia’s February invasion of Ukraine, increasing Guyana’s share of proceeds.

“Regarding oil and gas in Guyana, even though it was discovered in 2015, there is still a lot of about the fundamentals of the industry that many citizens are not fully aware of,” Wilburg said. She has thrown herself into the topic, hosting a show at Kaieteur Radio called Guyana’s Oil and You.

“There is still that information gap we are trying to close,” she added, about “what you should be demanding.”