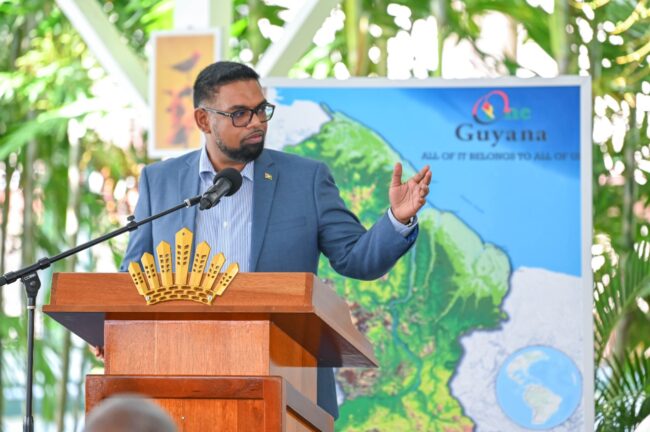 (DPI, 2.Dec.2022) — Guyana is set to earn an income of some US $750 million for its carbon credit from Hess Corporation, His Excellency, Dr Mohamed Irfaan Ali announced Friday morning.

The major deal between the government and the global energy giant will see the company purchasing 2.5 million carbon credits annually for the years 2016 to 2030.

The multi-year pact was signed between the government and Hess Corporation at the Baridi Benab, State House, Georgetown.

Carbon credits provide financial incentives to preserve forests and biodiversity that are at risk due to the growing economic activities and demand for natural resources.

President Ali said while the agreement serves to support Guyana’s efforts to protect its vast forests, resources will also be provided to improve the lives of Guyanese through investment, as part of the Low Carbon Development Strategy (LCDS) 2030.

For context, the LCDS is a framework intended to map the path of a new growth trajectory in a non-polluting way.

It outlines how the country’s abundant natural resources can be used to combat global climate change while building the foundation for a sustainable, low-carbon economy.

President Ali said the importance of the forests and their significance in the fight against climate change has consistently been championed by Guyana, particularly by former president and now Vice President, Dr Bharrat Jagdeo.

The head of state emphasised that the hallmark agreement clearly shows Guyana providing leadership on a critical issue, which has now gone a step further.

The Architecture for REDD+ Transactions (ART) announced Thursday that it has issued about 33.5 million TREES credits to Guyana, making it the first country worldwide to receive the status.

And while the administration is pursuing an aggressive energy platform, its commitment could never be questioned, since it is always backed by strong action, the head of state underscored.

Accordingly, he explained that the newly inked agreement will see the first 12.5 million legacy credits retrieved even between 2016 to 2020 ─ the period under the previous Coalition administration being sold.

The president said his government is focused on ensuring Guyana’s new era brings about an economy that is at the forefront of energy, food security, environmental and climate services, and ecological, biological and technological services.

Meanwhile, Chief Executive Officer of Hess Corporation, John Hess said the historic agreement further strengthens his company’s strategic partnership with Guyana and demonstrates its long-term commitment to the country and its people.

Guyana boasts some 80 million hectares of intact forests and has the second-highest percentage of forest cover on earth, with more than 89 per cent of the forest remaining intact. The forest stores 19.5 gigatons of carbon.

The historic event saw the attendance of government ministers and members of the diplomatic corps.

By Department of Public Information: Guyana