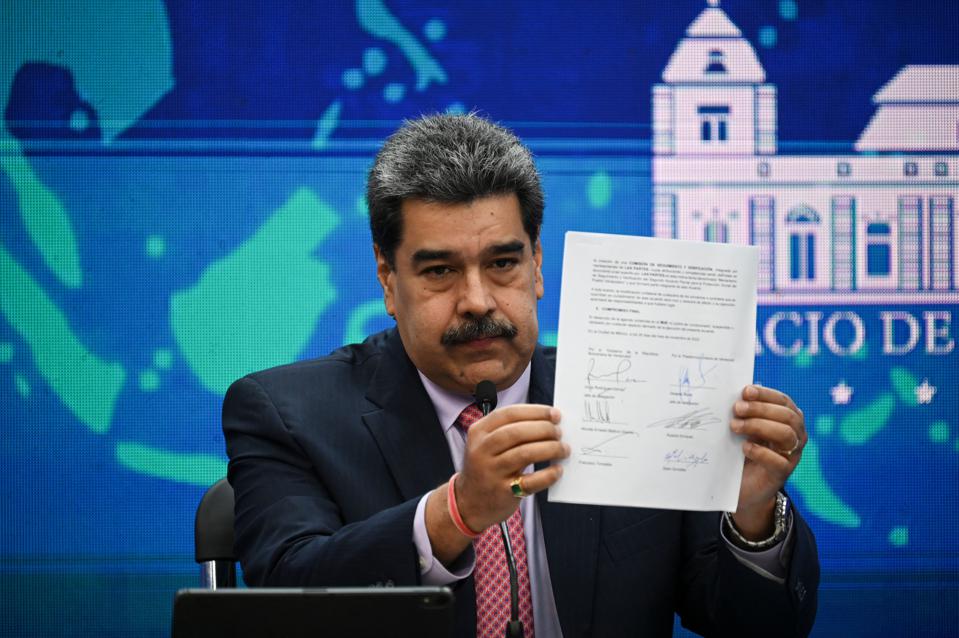 (Forbes, 2.Dec.2022) — A video that state-owned oil giant Petróleos de Venezuela posted to its Twitter feed this week shows a jovial meeting between Oil Minister Tarek El Aissami and Javier La Rosa, Chevron’s CVX country head. The clip shows La Rosa arriving at what looks to be Aissami’s offices, the two laughing, shaking hands, slapping each other on the shoulder. Just a couple of buddies doing an oil deal.

Venezuela’s President Nicolas Maduro was equally positive while rejecting any attempt to “mount a neocolonial model on us,” he said at a press conference. Speaking Wednesday, he praised a new license issued by the U.S. Treasury Department allowing Chevron to return to the country and called for an end to all U.S. sanctions, which since 2019 (in the wake of an embattled and purportedly fraudulent Venezuelan general election) have prevented American oil companies from operating there.

The nation, one of the founding members of OPEC, could sure use Chevron’s help. Venezuela’s oil industry has been decimated by decades of malinvestment. Two decades ago it was exporting 3 million barrels per day, with more than 1 million bpd sent to refineries in the U.S. But after the Chavez and Maduro regimes looted or redistributed PDVSA’s cash, years of deferred maintenance have eroded oil production to less than 700,000 bpd. This from a country with more than 300 billion barrels of proven reserves, the most in OPEC. Speaking at an event this week, CEO Mike Wirth made it clear that Chevron wants to help. “We’ve been trying to hang in there for a better day in Venezuela, to be part of building a better future for it. That’s really what the opportunity is there.”

And yet there are fierce critics of the deal allowing Chevron back in. The former Oil Minister and former president of PDVSA during the administration of former President Hugo Chávez, Rafael Ramírez, described the agreement, as promulgated by the Treasury Department’s Office of Foreign Asset Control, as a “brutal setback.” He resents the imperialist Americans thinking they can dictate the future of Venezuela’s oil sector. That’s a concern shared by Antonio de la Cruz, executive director of the Inter American Trends think tank. He wrote an article in El Nacional on Wednesday asserting that “license No. 41 to Chevron is the disguised privatization of PDVSA” by the Maduro regime.

The Treasury Department’s Office of Foreign Asset Control’s General License No. 41 authorizes Chevron to return to its joint venture operations in Venezuela, conduct whatever maintenance and repair is needed after its three-year absence, reactivate contractors and oil service companies, and get back to the work of pumping oil.

The license says Chevron can export oil from Venezuela and sell it to the United States. But it may not pay any taxes or royalties on that oil to Venezuela or PDVSA. And it can’t have any involvement with Russian operators there, who along with Chinese companies have filled the void left by Americans’ exit. Lastly, Chevron is not allowed to expand operations beyond what it had in January 2019.

So PDVSA sees its revenues decline in the short term as Chevron takes all the oil from five joint ventures and doesn’t share any of the proceeds with Venezuela. Neat trick.

Chevron says this apparent lopsidedness is fair because it is still seeking to recoup massive investments in those fields (reportedly some $4 billion) from which Chevron hasn’t seen any proceeds in years. Chevron’s ventures there would be able to pay workers and contractors and would be able, as customary, to settle some accounts “in kind” with oil, instead of dollars.

How much oil are we talking?

Output from Chevron’s ventures has declined from an estimated 100,000 barrels per day in 2019 to about 40,000 bpd now. That could possibly grow to 200,000 bpd in the next year or so, according to Amrita Sen of Energy Aspects—pushing Venezuela’s production back above 1 million bpd.

It’s strategically implausible that the U.S. and Venezuela not reform economic ties. The nation is simply too close to the U.S., with too much oil for Washington to cede the playing field there entirely to Russian and Chinese oil companies who have filled the void left by the departures of Exxon Mobil XOM and ConocoPhillips COP et al. European majors Eni and Repsol continue to operate there, but on smaller scale. Chevron’s history in the country dates back to 1926. A century of sunk investment is nearly impossible for a company to walk away from.

To be sure, the sanctions regime remains in place. But it’s softening. “We’ll work with our government to be sure we stay in compliance with those sanctions,” Wirth said in remarks to the Boston College Chief Executives Club in Boston. The tantalizing carrot of Chevron’s capital investment is an effective lure to keep Venezuela at the negotiating table in Mexico City. This is “realpolitik” in action.

Negotiations between the Biden Administration and Venezuela began last March, when it became evident that the world was heading into an energy crisis brought about by Russia’s invasion of Ukraine. That triggered senators like Florida Republican Marco Rubio and Democrat Bob Menendez of New Jersey, who criticized the notion of “propping up a dictator” in Caracas, in order to undermine a “murderous tyrant in Moscow.” No wonder the Treasury Dept. chose the Saturday after Thanksgiving when no one was paying attention, to release its license.

Andres Armijos, director of Latin America research at oilfield data provider Welligence, says this deal is a prerequisite step toward eventually removing sanctions and reintegrating Venezuela into world oil markets. “Right now they are limited in where they can sell their crude. They have to compete with other sanctioned barrels, like from Russia and Iran,” he says.

Citgo is arguably an even better bargaining chip than Chevron. The company is wholly owned subsidiary of PDVSA, handling 730,000 barrels per day at seven refineries and processing plants and 38 terminals feeding 4,400 gas stations nationwide.

Despite state ownership, Citgo is now independent of Caracas, with an ad hoc board of directors appointed by Juan Guaidó, whom the U.S. recognizes as the rightful victor of Venezuela’s last presidential election. Citgo had a net loss of $160 million last year, but when it does generate cash it stays in the U.S. rather than being siphoned back to Venezuela.

Some resent the administration seemingly favoring the Venezuelan oil industry over North America’s (Canadian heavy crude is a great substitute, after all). National Security Council coordinator John Kirby said it’s not about favoritism. He insisted in a press conference this week that there “are plenty of opportunities for oil and gas companies to drill here in the United States” on thousands of untapped leases. Besides, potential growth in Venezuelan oil wouldn’t relieve the need for more supplies. “It won’t be a lot of oil coming out of there,” Kirby said.

Maybe not in the short term. But Venezuela has ample oil reserves to support long-term sustainable production north of 5 million bpd. It’s just a question of what it will cost to get it out, both in dollars and political capital. Early this year Forbes reached prominent Venezuelan economist Jose Toro Hardy, who lamented the destruction of his country’s oil industry and figured bringing it back to its glory could cost $250 billion. That’s enough to keep Chevron, Exxon and many more busy for a couple decades—that is, if the politicians can figure out how to once again make Venezuela safe for capitalism.

Venezuela’s oil workers are hoping for the best and holding out hope that additional Chevron’s license could somehow translate to higher wages for them. Venezuela’s dollarization has widened the inequality gap of workers in the public sector still earning in bolivares (Venezuelan currency). Oil workers describe the current pay as “miserable.” In the latest national minimum wage increase in March, the director of the Federal Union of Oil Workers, Iván Freites, said the new increase would only provide around $28 a month to workers in the oil sector.

“Whenever there is a unilateral wage increase, in the end it does not favor the workers because it does not even reach a dollar a day” said Freites.