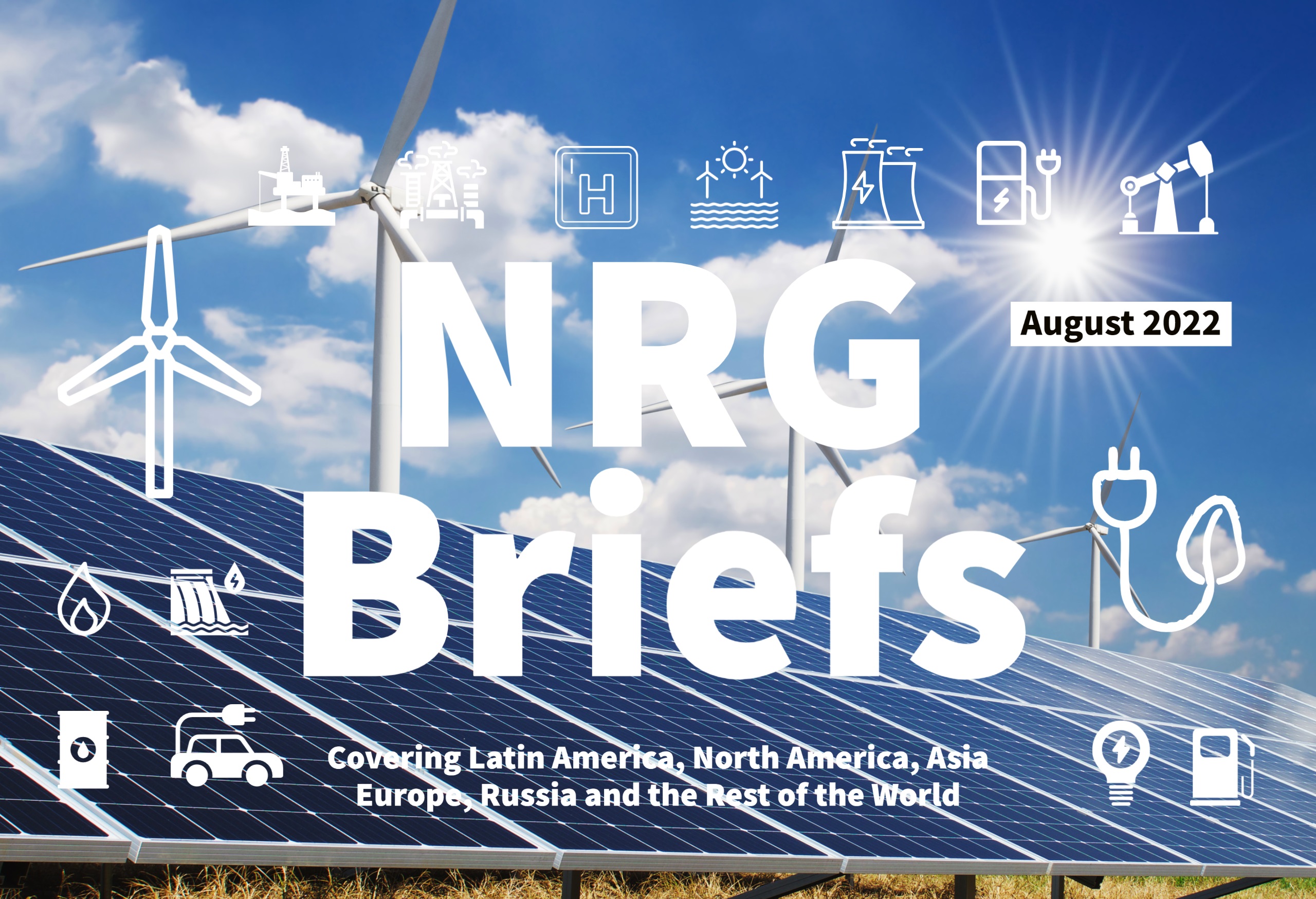 (Energy Analytics Institute, 31.Aug.2022) — Energy briefs as well as others related to finance and politics during August 2022 including Petrobras announcing firm well commitments to drill exploratory wells in 2023-24; Sempra Foundation and GRID Alternatives advancing energy access for orphans and migrant youth in Mexico; Datanalisis President Luis Vicente León saying 82% of Venezuelan citizens support a return to negotiations in Mexico City; Diamond Offshore entering into a contract with BOE Exploration & Production LLC for the Diamond-managed drillship Vela for work in the US Gulf of Mexico; YPF publishing its sustainability report for 2022; and more.

— Eco Atlantic continues to explore for advantaged bbls in countries from Namibia to Guyana that seek access to locally sourced energy, the co. announced in its most recent corp. presentation in Aug. 2022.

— In Aug. 2022, the last of APR’s turbines based at its Matheu plant in Argentina were demobilized from the country. This concludes the successful demobilization of all 14 turbines previously deployed in Argentina, Atlas announced in late-Aug. in an official stmt. APR is actively maturing opportunities to redeploy these turbines on long-term contracts.

— Interoil announced that Colombia’s Agencia Nacional de Hidrocarburos (ANH) granted an additional extension of the LLA47 exploration license as compensation for time lost for activities. The “time restitution is related to the self-isolation conditions imposed by native communities in the surrounding area of LLA-47 during the first semester of the current year,” Interoil revealed 22 Aug. 2022 in an official stmt. As such, the new expiration date for the LLA47 exploration license has been moved to 19 Sep. 2023.

— Colombia’s Minister of Mines and Energy Irene Vélez Torres says the goal of the gov’t of Gustavo Petro is to “accelerate the energy transition from dialogue to collective construction with all the country’s sectors,” the minister announced 19 Aug. 2022 in a post on Instagram. The minister also said meetings have been held w/ entities from Colombia’s electric and gas sectors as part of a initial process that will include permanent dialogue.

— The national gov’t, through the Ministry of Mines and Energy and the General Maritime Directorate (DIMAR) published Resolution No. 40284 of 2022 that defines the process by which those interested in developing offshore wind energy projects will obtain temporary permits on maritime areas destined for this type of projects and in turn calls for the first round of allocation, the ministry announced 5 Aug. 2022 in a doc. on its website.

— Zacatecas Silver Corp. (TSXV: ZAC) (OTC: ZCTSF) (OTC Markets: 7TV) (Frankfurt: 7TV)) reported multiple silver and base metal assays from its recently completed phase one diamond drilling at El Cristo vein system. Together w/ the previously announced results on 7 Jul. 2022, Zacatecas found significant silver-base metal mineralization within 22 out of the 28 holes drilled, the co. announced 30 Aug. 2022 in an official stmt. “El Cristo is the NW strike extension of the prolific and well known Veta Grande vein system onto the Zacatecas Silver property, with most of this extension still untested by drilling,” the co. said in the stmt.

— Approximately 43 firefighters and professional technicians from Petróleos de Venezuela, S.A. (PDVSA), who were sent recently to Cuba to support work to control a fire in the Matanzas supertanker port, have returned to Venezuela, the state oil giant announced 15 Aug. 2022 in an official stmt.

— Trinidad and Tobago’s Minister of Energy and Energy Industries Stuart Richard Young went to Venezuela on an official trip to review cooperation agreements as part of strategic alliances in addition to deepening and strengthening diplomatic ties the two countries have maintained for 10yrs, PDVSA announced 15 Aug. 2022 in an official stmt.

— Golden Arrow Resources Corp. (TSXV: GRG) (FSE: G6A) (OTCQB: GARWF) retained PI Financial Corp. to provide mkt making services in accordance w/ TSX Venture Exchange policies. PI will trade Golden’s securities on the TSX-V for the purposes of maintaining an orderly mkt. Golden will pay PI a monthly cash fee of $4,000 for minimum term of 3-mths and renewable thereafter. Golden and PI are unrelated and unaffiliated entities, Golden announced 29 Aug. 2022 in an official stmt. PI will not receive shrs or options as compensation and doesn’t hold any shrs in Golden for long term investment purposes for the benefit of PI Financial. The capital used for mkt making will be provided by PI.

— Diamond Offshore entered into a contract w/ BOE Exploration & Production LLC for the Diamond-managed drillship Vela for work in the US Gulf of Mexico. Vela was awarded a contract w/ a minimum duration of 225 days for a total value of ~$88mn, Diamond revealed 31 Aug. 2022 in an official stmt. The contract also includes options for up to an additional 5-7 wells. Work under the new contract is expected to commence in 1Q:23.

— Bristow Group Inc. (NYSE: VTOL) President and CEO Chris Bradshaw  will present at the 2022 Barclays CEO Energy-Power Conference on Thu. 8 Sep. 2022 at 9:45am ET and participate in investor meetings throughout the day, the co. announced 30 Aug. 2022 in an official stmt.

— John Solis has been promoted to VP of Design-Build (EPC) at Total-Western where he will be responsible for the Design-Build (EPC) construction business across the entire Total-Western organization. “This will allow the company to further its commitment on delivering full life cycle solutions as a turn-key design-build-operations-maintenance partner for its clients in the industrial space,” Total-Western announced 30 Aug. 2022 in an official stmt.

— Mgmt of PNM Resources (NYSE: PNM) will meet w/ analysts and investors this wk in Minneapolis and Chicago, the co. announced 30 Aug. 2022 in an official stmt. During the meetings, mgmt is expected to affirm the co.’s consolidated earnings guidance of $2.50-$2.60/diluted shr in 2022 and $2.60-$2.75/diluted shr in 2023. Presentation materials are available on the co.’s website.

— Members of the senior mgmt team NextEra Energy, Inc. (NYSE: NEE) and NextEra Energy Partners, LP (NYSE: NEP) will participate in various investor meetings in late-Aug./early-Sep., the cos. announced 29 Aug. 2022 in joint stmt. The cos. will discuss, among other things, long-term growth rate expectations.

— “Young people have a strong voice. And they’ve been speaking up about environmental injustice and the climate crisis,” US President Joe Biden said 23 Aug. 2022 in a Twitter post. “The Inflation Reduction Act builds them a better future, cleaning up the pollution of the past and positioning us to cut emissions in half by 2030.”

— bp commends the US Congress for passing the Inflation Reduction Act, the co. announced 12 Aug. 2022 in an official stmt. “This historic legislation will help bp and America reach their shared ambition to be net zero by 2050,” the co. said, adding: “bp has actively supported many of the climate and energy provisions passed today. This legislation will help bp provide secure, affordable and lower carbon energy.”

— According to a new Bodø Science Park rpt presented by Equinor together w/ its Norwegian continental shelf (NCS) union representatives, 1,800+ suppliers in 250 industries in 152 municipalities in Norway delivered goods & services for NCS fields and onshore facilities operations in 2021. The monetary value is over NOK 70bn and employed close to 60,000 man-yrs, Equinor announced 31 Aug. 2022 over Instagram.

— A Russian court ruled that Salym Petroleum Development (SPD), a JV between Shell and Gazprom Neft, should be transferred to Russian jurisdiction, Interfax news agency reported, citing the verdict.

— CNOOC Ltd revealed its 2022 mid-yr review, highlighting that it captured the cycle of high oil prices, oil and gas sales and net profit both registered the best performance in history. Also, the co. said all-in cost came in under effective control and Capex was well under way while the co. is actively rewarding shareholders and its interim dividend hit a record high, the co. announced 26 Aug. 2022 in a presentation on its website. In Guyana, the co. said the recoverable resource is early 11 billion boe and “expected to be further improved.”