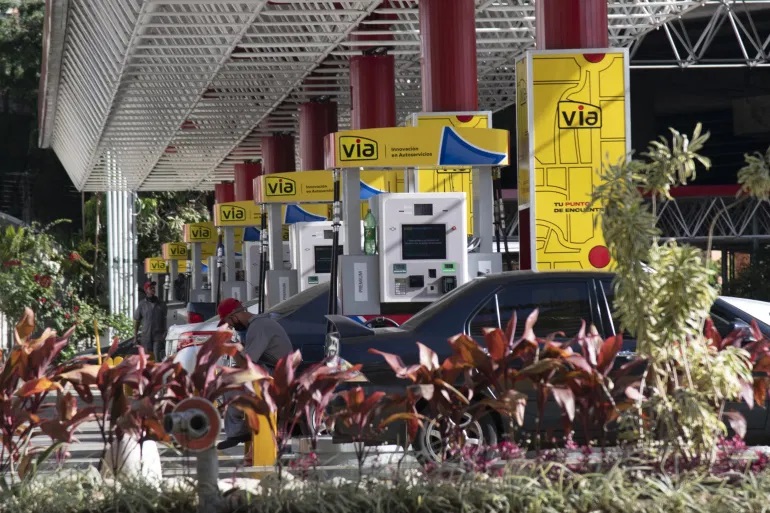 (Bloomberg, 11.Mar.2021) — Welcome to Venezuela’s new gasoline stations: They boast digital fuel pumps and high-end, imported liquor. They’re plastered in fresh coats of bright yellow and red paint. And in what’s become a rarity these days, they actually have gasoline to sell — for a price that very few can afford.

Over the past six months, the regime of Venezuelan President Nicolas Maduro has been quietly handing over dozens of run-down gasoline stations across the country to local entrepreneurs who turned them into these flashy retail complexes and rebranded them under a chain known as Via. It’s the first phase of a desperate and complicated plan to rescue the country from U.S. sanctions that have dealt a final blow to Venezuela’s oil business and choked the nation of fuel supplies so severely that filling stations have been forced to repeatedly shut.

The way Maduro sees it: The new ventures will operate as independent businesses and import fuel free of American sanctions that specifically target his administration and those who help it. It’s a fairly straight-forward plan until you look under the hood: The gas station deals that Maduro’s government has done so far aren’t publicly disclosed. Nobody seems to know who ultimately owns them or who runs them. And some are already raising concerns about whether the government itself is still behind the operations.

“The changes are a reaction to the state’s collapse, not a well-thought plan,’’ said Jose Manuel Puente, an economics professor at Caracas-based IESA business institute. “New fuel pump stations are just an illusion of harmony, not part of a structural stabilization of the economy.”

The plan’s apparent lack of substance doesn’t end at the new gas stations. The country’s fuel import and distribution network is entirely in the hands of U.S.-sanctioned Petroleos de Venezuela SA. The government is working on a reform that will officially end the monopoly and allow Maduro to also transfer some of those operations to allies. That would be a much bigger undertaking, however, and it seems even more improbable that they would be able to operate without doing business with PDVSA, as the state-run oil company is known.

People with knowledge of the plan, including government officials, PDVSA contractors and several gas station owners, spoke about the changes but asked not to be named because they fear reprisal.

There’s also the issue of weaning Venezuelans off subsidized fuel that sells practically for free. A trade mark of Maduro’s late mentor and predecessor Hugo Chavez, the policy has become a cash drain for the government now that the country’s crumbling refineries are no longer able to meet domestic demand and it’s importing gasoline and diesel from Iran. The imported fuel has been paid for with gold bars and the vaults are running empty.

At a new Via filling station in eastern Caracas, drivers can head straight to the pump without having to wait in endless car lines that have become a common sight in the city. The gasoline there is better and costs 50 cents per liter, or roughly $1.90 per gallon. That may seem cheap by international standards, but a minimum wage in Venezuela is less than $1 a month, plus food coupons. Customers can also find 18-year old Scotch Whiskey, Mexican coffee and packaged prime meat cuts at the new, heavily guarded convenience stores.

Though there’s no public number for the new fuel stations, they seem to be more than 50 already and the goal is to reach 400.

Meanwhile, some 1,500 old gas stations across the country sell gasoline for about 5,000 bolivars per liter, which is worth less than 0.3 cents, so most drivers continue to wait for hours in line whenever one of them has fuel. Eventually, Maduro’s government hopes to phase out the subsidies, except for public transportation, but the contentious issue has triggered revolts in the past and there’s no outlook for ending the enormous disparity of the current two-tier system anytime soon.

Business alliances have been secretly sealed in the agribusiness and food industry, too. A law sanctioned last year makes new contracts with the government confidential, allegedly to protect firms from U.S. sanctions. The result has been similar: Shelves at good supermarkets are no longer empty, but the prices of the new products are linked to the U.S. dollar and are too expensive for most Venezuelans, so they rely instead on government food banks and coupons to put food on the table.

One benefit from the new fuel stations for lower-income Venezuelans, the lucky ones who managed to keep their jobs as clerks, is much better pay. One of them at a Via station said he’s now making the equivalent of $60 a month, compared with about $1 under the previous management.

“This is way better than before,” he said. “It helps me to bring more food to my family.”