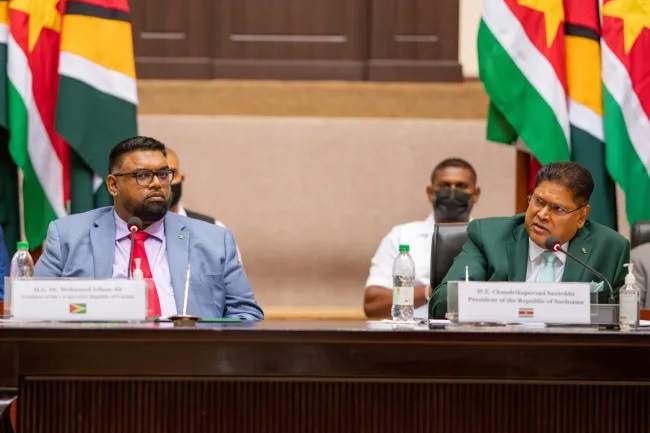 (DPI, 19.Aug.2021) — Recognising the vast potential of Guyana and Suriname’s oil and gas sectors, their Excellencies Dr. Mohamed Irfaan Ali and Chandrikapersad Santokhi have indicated that the two countries will jointly strategise the development of this critical and lucrative sector.

During engagements with the Private Sector Commission (PSC) and a joint press conference at the Arthur Chung Conference Centre (ACCC) on Thursday, President Ali and the Surinamese Head of State both reaffirmed their commitment to ensuring that their countries’ oil and gas sectors are prudently managed.

On the side of enhancing human resource capabilities, Dr. Ali stated that Suriname’s national oil company Staatsolie will be offering on-the-job training for Guyanese.

“As you know that they are also advanced in the certification of key areas in the oil and gas sector for example welding, and we have identified this in an area where they can help our human resource base to become certified to participate in this sector.”

Further, President Ali said although both of these countries have a small population, they have the resources, skills and knowledge to tap into markets across the globe.

“We have some exciting developments, especially on the gas side. We are not talking about Guyana and Suriname anymore. We are talking about a joint gas strategy for both countries; a joint strategy that would see the development of both frontiers.

“We may be a smaller number, but we have access to huge markets in northern Brazil and along with the Guiana Shield, and we have the potential of becoming the food and energy capital and that is the policy direction we’re getting into,” President Ali told members of Guyana and Suriname’s private sector.

Both countries have also established a common gas strategy which will also facilitate development in sectors such as infrastructure, industries, manufacturing, and natural resources.

Notably, both of these CARICOM nations will also create a local content platform that will create and support opportunities in not just the oil and gas sector, but the other areas of the two countries’ economies.

Meanwhile, President Santokhi said a technical expert from his country will return to Guyana and sit with the country’s private sector to discuss new developments in the two countries.

“The joint operation on gas exploitation will generate cheap energy; exporting the gas to Brazil. In the coming weeks, the Presidents of Brazil, France, French Guiana, Guyana and myself will have a high-level meeting and have a discussion on the sub-region like shore bases,”President Santokhi said.

On Friday, President Santokhi and his high-level delegation will be returning to Suriname after spending four days in Guyana.