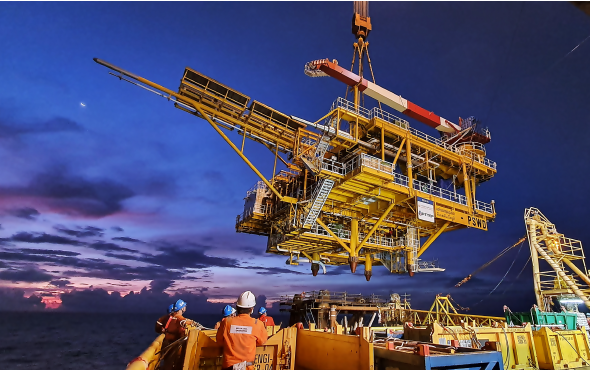 (PTTEP, 1.Aug.2022) — PTTEP revealed its first-half of 2022 operating results with an increase in average sales volume primarily from Oman Block 61 Project and G1/61 Project. During the period, the company has accelerated the execution of G1/61 Project work plan for raising up gas production rate to ensure national energy, initiated the development of CCS project and pursued to invest in beyond E&P businesses in response to the changing industry landscape amid the energy transition and to support the Net Zero Greenhouse Gas (GHG) Emissions target. The Board of Directors approved the interim dividend payment at THB 4.25 per share.

Mr. Montri Rawanchaikul, Chief Executive Officer of PTT Exploration and Production Public Company Limited (PTTEP), said that after assuming the operatorship of G1/61 Project in April, PTTEP has already installed 2 wellhead platforms and laid 8 subsea pipelines. The installation of 6 more wellhead platforms is targeted for completion within this year. The company is also geared up to drilling more production wells ramping up the production rate to meet the condition in the Production Sharing Contract (PSC). This will accommodate energy demand and strengthen national energy security. For overseas operations, PTTEP successfully started oil production from Algeria Hassi Bir Rekaiz Project in the second quarter with target production volume of 13,000 barrels per day.

In support of the company’s ambitious target to achieve Net Zero GHG Emissions by 2050 in its move towards a low-carbon organization, PTTEP has initiated Thailand’s first Carbon Capture and Storage (CCS) project at Arthit gas field in the Gulf of Thailand to reduce carbon emissions. The company expects to announce its Final Investment Decision (FID) in late 2023.

On another front, PTTEP has joined hand with experienced Japanese partners for the study and development of CCS in other parts of Thailand. Together with PTT Group, CCS Hub Model is launched with an aim to reduce GHG emissions from PTT Group’s operations and neighboring industries.  Furthermore, PTTEP recently collaborated with PTT Group’s members, the public sector and other private enterprises to establish “Thailand CCUS Consortium” for the study and adoption of Carbon Capture, Utilization and Storage (CCUS) for Thailand’s industrial sector. These endeavors will give concrete supports to Thailand’s commitment towards Net Zero GHG emissions.

On the progress of the Ocean for Life strategy shaping to conserve and rehabilitate marine ecosystems, PTTEP teamed up with Hydro-Informatics Institute (Public Organization) and Kasetsart University’s Faculty of Fisheries to launch the Ocean Current Mapper project to collect data for oceanic circulation, life cycles of marine life as well as trail of oceanic waste and microplastic. The data through a satellite system can also support warning systems and the study of climate impacts. The first set of buoys was launched near Arthit gas field, being Thailand’s first offshore tools for the study of oceanic currents. More buoys will be gradually launched on monthly basis until mid-2023, aiming to monitor ocean health and marine biodiversity, which is crucial for marine conservation.

On the 6-month financial performance of 2022, PTTEP generated a total revenue of $4,543mn (equivalent to THB 153,528mn), increasing by 28% compared to $3,546mn (equivalent to THB 109,658mn) in the same period of 2021. The key contributions were an improvement in average sales volume to 446,519 barrels of oil equivalent per day (BOED), an 8% increment from 413,168 BOED a year ago. Contributions to higher sales volume were mainly from Oman Block 61 Project and G1/61 Project (Erawan, Platong, Satun and Funan fields), along with an increasing selling price resulted from global crude oil price escalation.

With all aforementioned, PTTEP recorded net profit for the first half of the year at $918mn (equivalent to THB 31,119mn), a 54% growth when compared with USD 598 million (equivalent to THB 18,673mn) a year ago. The unit cost was at $27.72 per barrel of oil equivalent (BOE), while Earnings before Interest, Taxes, Depreciation and Amortization (EBITDA) margin stood at 76%.

First half of 2022, over approximately THB 50,000 million paid by PTTEP for company’s income tax, royalties, production bonus and other remuneration. This strongly supports national development in various areas such as community, education, and research & development (R&D) funds.

The approval of an interim dividend payment at THB 4.25 per share

Based on the company’s performance, on July 29, 2022, the Board of Directors approved the interim dividend payment for the first six-month operating results at THB 4.25 per share. The record date to entitle rightful shareholders who may receive the dividend will be on August 16, 2022, and the payment date will be on August 26, 2022.

“The performance of the first half reflected the achievement of our business operations as well as social and environmental contributions as planned. During this period, the company has been exploring for the investment opportunities in new businesses (Beyond E&P) in support of energy transition, enhancing competitiveness on our path towards a low-carbon organization and sustainable growth. We witnessed progress on several fronts including CCUS.  PTTEP has also started the development of a 10-megawatt solar farm at S1 Project. Harnessing power from renewable energy for the project’s internal use will help reduce carbon emissions. It is expected to be operational in the first quarter of 2023.  We are gearing up to invest more in other new businesses and we look forward to updating the progress in the near future,” Mr. Montri said.