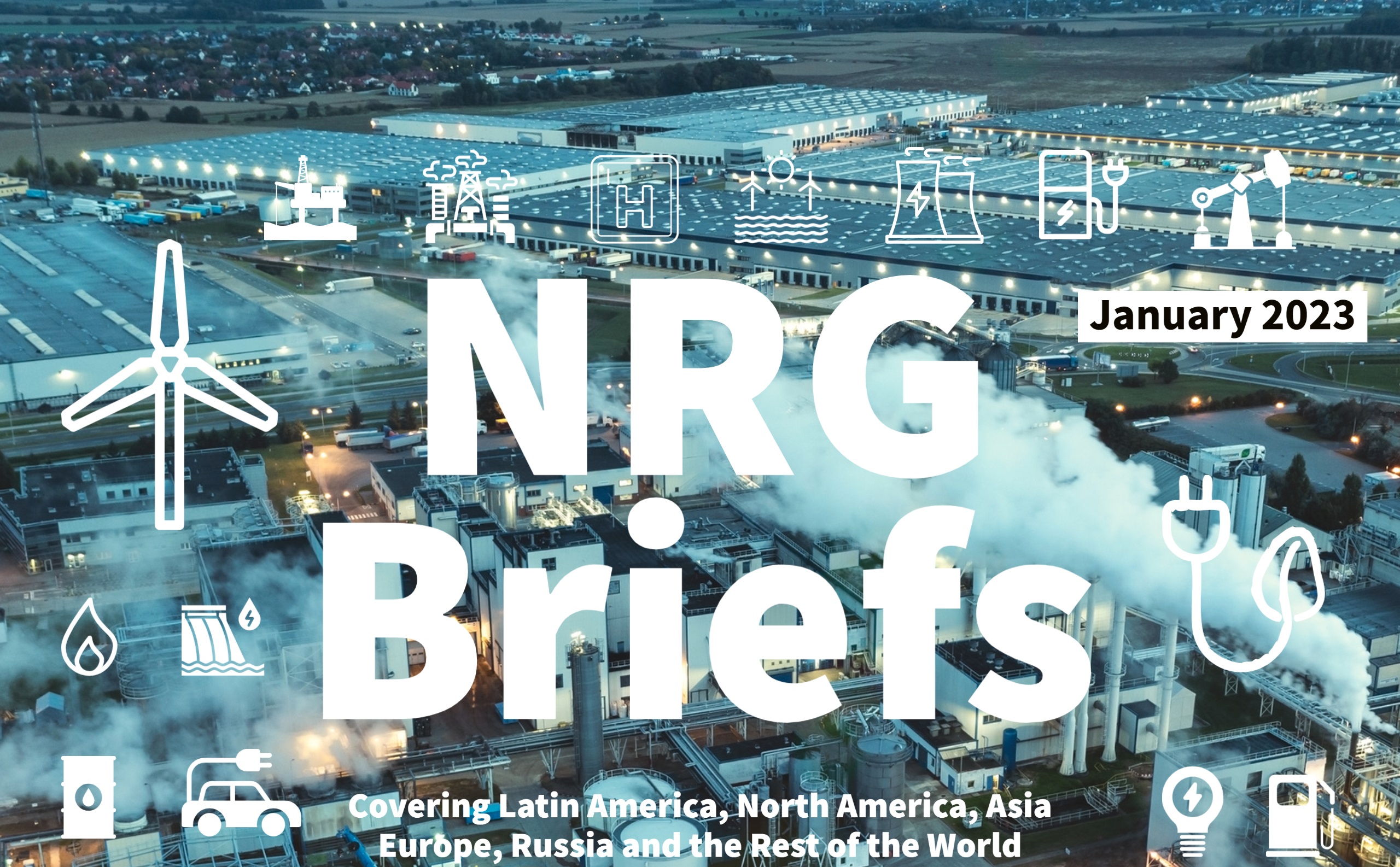 (Energy Analytics Institute, 28.Jan.2023) — Energy briefs as well as others related to finance and politics during January 2023 including Trinidad and Tobago Prime Minister Dr. Hon. Keith Rowley said during the Trinidad and Tobago Energy Conference (TTEC) in Port of Spain that “in this uncertain global environment, energy is a key if not the major factor for economic growth which has a direct impact on standards of living”; ExxonMobil securing exploration rights to two exciting new blocks, Masry and Cairo, in the outer Nile Delta offshore Egypt; Moody‘s Senior Vice President Nymia Almeida saying new governments in Latin America imply significant changes in 2023 and beyond especially for the energy industries of Brazil and Colombia; and more.

— Imperial Oil Limited (TSE: IMO, NYSE American: IMO) chairman, president and CEO Brad Corson and Investor Relations VP Dave Hughes will host a 4Q:22 earnings call on 31 Jan. 2023 following the co.’s earnings release that morning. The event begins at 9am MT and will be accessible by webcast. During the call Corson will offer brief remarks prior to taking questions from Imperial’s covering analysts, the Alberta-based co. announced 19 Jan. 2023 in an official stmt.

— Duke Energy Florida has identified 4 locations in Franklin, Highlands and Marion counties for inclusion in its 2022 Site Readiness Program to evaluate and prepare industrial site opportunities for economic development investments, the co. announced 20 Jan. 2023 in an official stmt.

— CSI Compressco LP (NASDAQ: CCLP) said the BODs of its general partner has declared a cash distribution attributable to the qtr ended 31 Dec. 2022 of $0.01 per outstanding common unit, or $0.04 per outstanding common unit on an annualized basis. This cash distribution will be paid on 14 Feb. 2023 to all common unitholders of record as of the close of business on 31 Jan. 2023, CSI announced 19 Jan. in an official stmt.

— enCore Energy Corp. (TSXV: EU) (OTCQB: ENCUF) announced its common shrs have been approved for listing and trading on the NYSE American. The co. expects the shrs will start trading at mkt open on 23 Jan. 2023 under the symbol “EU” and will be delisted from the OTCQX, enCore announced 18 Jan. 2023 in an official stmt.

— Schneider Electric announced it earned Certification™ by Great Place to Work® across North America. This marks the 1st win for Canada and Mexico, and the 5th time the US team has been named to the list, Schneider announced 18 Jan. 2023 in an official stmt. The team in Costa Rica also earned this recognition.

— Bristow Group Inc. (NYSE: VTOL) and its subsidiaries have entered into two 13-yr secured equipment financings for an aggregate amount up to £145mn w/ National Westminster Bank Plc. Proceeds from the financings will be used to refinance the indebtedness of the previous equipment financing facilities w/ Lombard North Central Plc, refinance the aircraft financed thereby, and provide additional financing to support Bristow’s obligations under its contracts w/ the Department for Transport and the Maritime & Coastguard Agency of the UK, Bristow announced 11 Jan. 2023 in an official stmt.

— enCore Energy Corp. (TSXV: EU) (OTCQB: ENCUF) announced the previously announced purchase of the Alta Mesa project from Energy Fuels Inc. will close on or before 15 Feb. 2023. Closing is subject to obtaining final stock exchg approval and all closing conditions, the co. said 9 Jan. 2023 in an official stmt.

In conjunction w/ Nucor‘s (NYSE: NUE) 4Q:22 earnings release, the co. will have a live conf. call w/ host Leon Topalian, Nucor’s Chair, President and CEO. The event will be available on the internet on 26 Jan. 2023, at 2pm EST, the co. announced 6 Jan. in an official stmt.

— Mantaro Precious Metals Corp. (TSXV: MNTR) (OTCQB: MSLVF) (FSE: 9TZ) completed results from the 21 diamond core holes drilled by the co. in 2022 at the Golden Hill property in Bolivia. Significant intercepts from the drill program are summarized in the attached map, including newly reported intercepts, Mantaro announced 12 Jan. 2023 in an official stmt.

— Petrobras, received tday the cash payment of $1.635bn (R$8.455bn) related to the sale of all of its interest in the Albacora Leste production field, located in the Campos Basin, to Petro Rio Jaguar Petróleo LTDA., a subsidiary of Petro Rio S.A., the co. announced 26 Jan. 2023 in an official stmt.

— Petrobras announced 24 Jan. 2023 in an official stmt. that its hasn’t yet been formally communicated about the indication of the members of the exec. board of the co. Following the usual procedures for nominating co. managers, the nominee’s name must go through Petrobras’ internal governance procedures. In the case of the members of the exec. board, the final nomination will depend on the approval of the BODs, under the terms of the Law and of the co.’s Bylaws.

— Petrobras clarified 24 Jan. 2022 in an official stmt. that a meeting of the BODs of the co. will be held next Thu. and one of the subjects on the agenda is the nomination of Mr. Jean Paul Prates for the CEO of the co.

— Petrobras informs that the Eligibility Committee (CELEG) met on this date to analyze the nomination of Mr. Jean Paul Prates for the positions of Director and CEO of Petrobras based on the co.’s governance rules and applicable legislation, the Rio de Janeiro-based oil giant said 24 Jan. 2023 in an official stmt.

— Petrobras rec’d the devolution of about R$456mn, recovered through a leniency agreement w/ UOP LLC – a subsidiary of Honeywell International Inc. – signed w/ the Office of the Comptroller General (CGU) and the Federal Attorney General’s Office (AGU), an instrument that is part of a global resolution that involved coordinated action w/ the Office of the Federal Public Prosecutor (MPF) and US authorities. Petrobras did not have access to the agreement, the co. said 16 Jan. 2023 in an official stmt.

— New govts in LatAm imply significant chgs in 2023 and beyond especially for the energy industries of Brazil and Colombia, Moody‘s SVP Nymia Almeida announced 5 Jan. 2023 in a new rpt. In Brazil (Ba2 stable), probable chgs to the Law of State Companies would increase governance risk for Petrobras (Ba1 stable). Meanwhile, Colombia’s (Baa2 stable) new energy and environmental priorities imply substantial restrictions on E&P activity, but existing concessions would still preserve tday’s status quo for yrs to come. Almeida said the new Lula da Silva administration will probably also halt the sale of Petrobras’ assets, which would reduce its flexibility to adjust its asset base to a business model so far focused on oil and gas production. The NOC’s current operating and financial conditions are strong, so any chgs to its business strategy and fuel price policy would have little impact on its credit quality in the next 12-18 mths, especially based on a likely modest decline in oil prices in 2023.

— Petrobras, regarding news published in the media, says the divestment process of the Bahia Terra Cluster is in the negotiation phase w/ the consortium of cos. Petrorecôncavo and Eneva, and has not been suspended, according to the releases disclosed on 13 Dec. 2022 and 3 Nov. 2022, the state oil giant confirmed Jan. 5 in an official stmt.

— Ecopetrol CEO and President Felipe Bayón will step down from the post effective on 31 Mar. 2023, the Colombian oil giant said 27 Jan. 2023 in an official stmt.

— The Republic of Colombia previously announced a tender offer to buy its outstanding 4.000% Global Bonds due 2024 and 8.125% Global Bonds due 2024 on the terms and subject to the conditions contained in the offer to purchase, dated 24 Jan. 2023. Colombia has instructed J.P. Morgan Securities LLC, as the billing and delivering bank for the tender offer, to accept, subject to proration and other terms and conditions contained in the offer to purchase, valid reinvestment tenders and simple tenders of the old bonds in an aggregate principal amount of US$532,980,000. All capitalized terms used but not defined in this communication have the respective meanings specified in the offer to purchase, the gov’t of the South American country announced 25 Jan. 2023 in an official stmt.

— GoGold Resources Inc. (TSX: GGD) (OTCQX: GLGDF) released results of 8 drill holes from the El Favor East deposit within Los Ricos North property. Hole LRGF-22-147 intersected 1.2m of 4,209 g/t silver equivalent (AgEq) contained within 19.9m of 436 g/t AgEq. “The holes which we have been drilling in El Favor, along with our large resource and the data which we’ve collected over the last two years of drilling, will be invaluable when included with our upcoming preliminary economic analysis (PEA) study,” said Brad Langille, President and CEO. “We believe the investment we’ve made in Los Ricos North will return tremendous value to our shareholders.”

— Mexico’s debt-laden oil driller, Petroleos Mexicanos, is searching for funds to make almost $10 billion in bond payments this year — a sum that neither the company nor the government included in their annual budgets, Bloomberg reported 9 Jan. 2023

— Avino Silver & Gold Mines Ltd. (ASM: TSX) (NYSE American: TSX) (FSE: GV6) released results of four drill holes from below Level 17, the current deepest workings at the mine. The co. has been mining the Avino Vein by modern bulk mining methods to a depth of 483m, Avino announced 5 Jan. 2023 in an official stmt. This drilling shows the Avino Vein to extend a further 315m downdip. This exploration program is designed to test the continuity of the steeply dipping mineralization and to understand the source of the mineralization. As a result of this drilling, the Avino Vein is now known to be 800m deep downdip. Additionally, it appears that the Avino Vein is getting richer in copper as we go deeper w/ a grade of 1.63% copper over 16.66m in Hole ET 22-12.

— “In this uncertain global environment, energy is a key if not the major factor for economic growth which has a direct impact on standards of living,” Trinidad and Tobago Prime Minister Dr. Hon. Keith Rowley said 23 Jan. 2023 during the Trinidad and Tobago Energy Conference (TTEC) 2023 in Port of Spain.