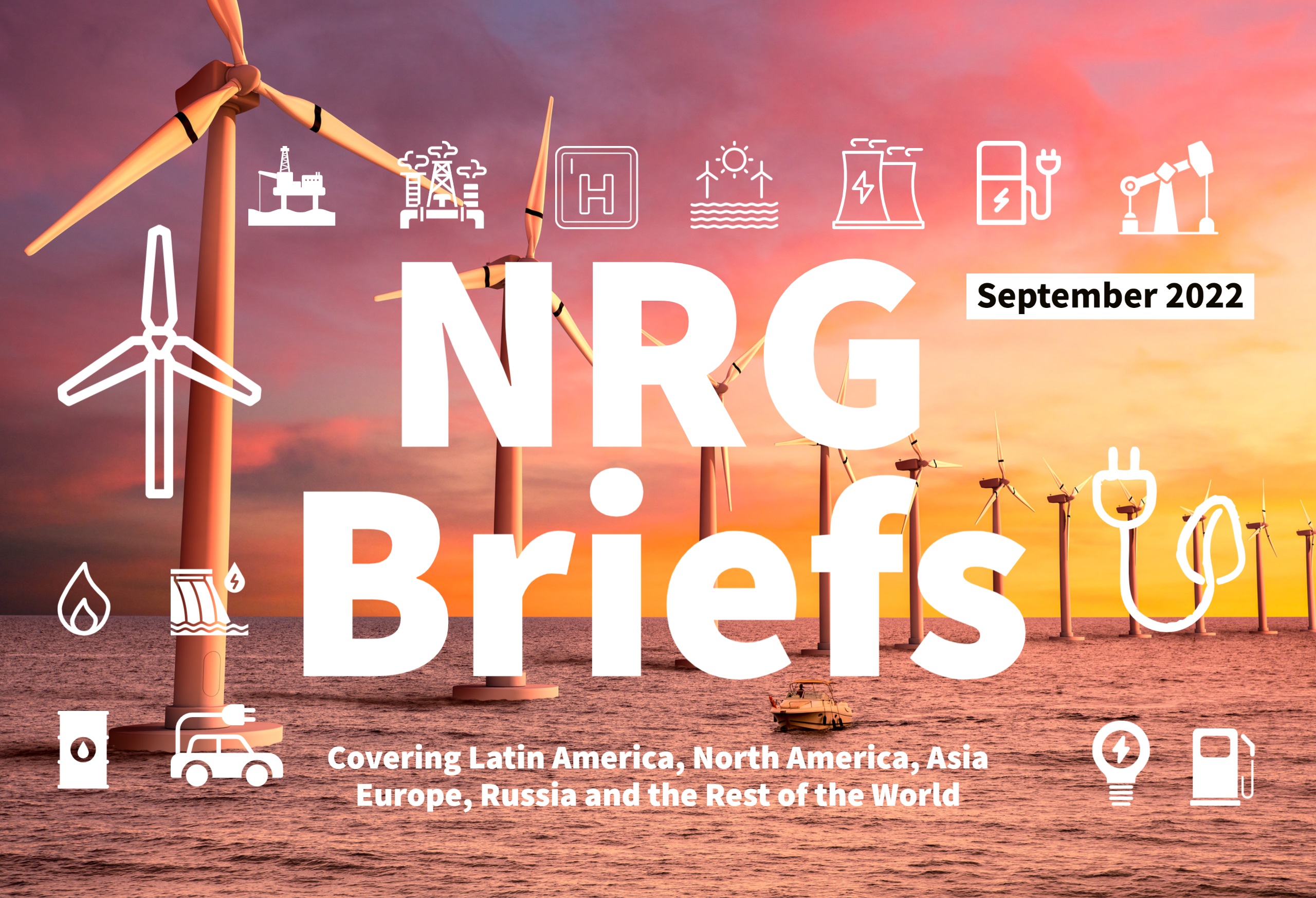 (Energy Analytics Institute, 26.Sep.2022) — Energy briefs as well as others related to finance and politics during September 2022 including EXMAR closing the sale of the floating liquefaction barge Tango FLNG to Eni; the Venezuelan government officially regaining control of the petrochemical company Monómeros, a subsidiary of the state-owned PDVSA; Kootenay Silver Inc. (TSXV: KTN) announcing the newest batch of results from its Phase 4 drilling program at Columba high-grade silver project in Chihuahua State, Mexico; the Maersk Voyager high-spec ultra-deepwater drillship is currently mobilizing for a drilling campaign offshore Suriname with Shell; and Venezuela recording 110,631 power outages between Jan.-Aug. 2022; and more.

— B2Gold Corp. (TSX: BTO) ( NYSE: BTG) (NSX: B2G) announced add’l positive exploration drilling results from the Anaconda Area, located ~25km north of the Fekola Mine, confirming continuity of the Mamba Main Zone, which remains open down plunge. The Anaconda Area, comprised of the Menankoto and Bantako North permits, forms part of the Fekola complex, which also includes the Fekola Mine and the adjacent Cardinal Zone, the Bakolobi permit, and the Dandoko permit (subject to completion of the Oklo Resources Ltd. transaction), B2Gold announced 15 Sep. 2022 in an official stmt.

— Argentina’s Minister of the Economy Sergio Massa boasted the following after a trip to North America to visit w/ US officials and executives: debt relief agreements, lithium mining and production, auto manufacturing, energy industry, and tech access as part of a comprehensive and aggressive plan to bolster Argentina’s economy, the Instituto Nacional de Promocion Turistica announced 14 Sep. 2022 in an official stmt.

— The Venezuelan gov’t officially regained control of the petrochemical co. Monómeros, a subsidiary of the state-owned PDVSA and located in Colombia. The co. has been managed by Venezuela’s opposition and Juan Guaidó since 2019, the daily El Espectador reported 20 Sep. 2022, citing Communications Minister Freddy Ñáñez.

— Colombia’s President Gustavo Petro reconfirmed the need to increase gasoline and diesel prices to balance the deficit foreseen in the Fuel Stabilization Fund (Fepc by its Spanish acronym). The adjustments could start in Oct. 2022, the daily El Tiempo reported on 16 Sep. 2022, citing Colombia’s Finance Minister José Antonio Ocampo. Although the magnitude of the adjustment hasn’t yet been defined, Ocampo said the increase could be around “400 pesos per month” and said it would increase gradually in 2023.

— Colombia’s President Gustavo Petro says there’s a need to increase the price of gasoline in the Andean country. “The fuel price stabilization deficit due to non-payment by the previous government of Iván Duque is 10 billion (pesos) per quarter (about $2.3mn). That is almost 40 billion annually (about $9.200mn)… almost half of the national budget deficit [and] produced by not raising the price of gasoline,” Petro announced 11 Sep. 2022 in a series of Twitter posts.

— Colombia is preparing to live a new period of diplomatic and commercial relations w/ its neighbor Venezuela, journalist Jorge Sáenz w/ the daily El Espectador reported on 11 Sep. 2022, adding that however the road would likely be plagued w/ difficulties. Deterioration of the varied infrastructure reveals the degree of distance between the two countries, Sáenz said, again adding that repairing relations will require a lot of time and growing investment, more on the Venezuelan side than on the Colombian side.

— Colombia’s President Gustavo Petro announced the country’s Ministry of Mines and Energy would assume the functions of the Energy and Gas Regulation Commission (CREG by its Spanish acronym), according to reports 9 Sep. 2022 by the daily El Espectador.

— English-speaking Guyana is unsure how to distribute oil properties outside of ExxonMobil‘s blks and postponed a possible auction, news agency Reuters reported 20 Sep. 2022, citing a source close to the matter.

— Kootenay Silver Inc. (TSXV: KTN) announced the newest batch of results from its Phase 4 drilling program at Columba high-grade silver project in Chihuahua State, Mexico. Results from five drill holes are reported here including one hole from D Vein and four holes from F Vein, Kootenay announced 1 Sep. 2022 in an official stmt. The current diamond drill exploration program is planned at 15,000m and designed to step out on mineralized veins along strike and to depth within the target-rich Columba Silver Project. Drilling is currently paused pending assays. The results successfully extend known mineralization beneath existing drilling at both the D Vein and F Vein targets, additional results are awaited.

— Puerto Rico is w/o electricity or water and still w/ many areas flooded and even isolated a day after Hurricane Fiona passed across the island, new agency Efe reported on 19 Sep. 2022.

— CAF awaits approval from the gov’t of Nicolas Maduro regarding installation of power generation plants on Margarita Island, the daily El Carabobeño reported 11 Sep. 2022. The Korean-English-Venezuelan co. Wod Ocean is said to have presented a project to replace sections of the underwater pipeline between the states of Sucre and Nueva Esparta, but despite lobbying in Miraflores, no response has been forthcoming to start the work, the daily reported.

— Venezuela’s Minister of Electric Energy Néstor Reverol denounced a supposed “new attack” at the Josefa Camejo Thermoelectric Plant in the coastal state of Falcón, although he stated that electricity service has already been fully restored in the zone, the daily El Carabobeño reported 10 Sep. 2022 citing data from Efe. Reverol said the attack caused an explosion at transformer number two (terminal two) of the plant.

— Nucor Corporation ( NYSE: NUE) said its President and CEO, Leon J. Topalian, has assumed the add’l role of BODs Chair while BODs member Christopher J. Kearney has been named Lead Director of the BODs, both effective 15 Sep. 2022, the co. announced in an official stmt. John H. Walker, a BODs member since 2008 and most recently its Non-Executive Chairman, will continue to serve as a BODs member.

— US Labor Secretary Marty Walsh announced 15 Sep. 2022 over Twitter that after 20+ consecutive hrs of negotiations that the rail cos and union negotiators reached a tentative deal “that balances the needs of workers, businesses, and our nation’s economy.” Walsh also said “the Biden Administration applauds all parties for reaching this hard-fought, mutually beneficial deal. Our rail system is integral to our supply chain, and a disruption would have had catastrophic impacts on industries, travelers and families across the country.”

— Bristow Group Inc. (NYSE: VTOL) will present at the 30th Annual Deutsche Bank Leveraged Finance Conference on Tues. 20 Sep. 2022. Bristow’s SVP and CFO Jennifer Whalen is slated to present on at 3:35pm MDT and participate in investor meetings throughout the day, the co. announced 14 Sep. in an official stmt.

— Salient Midstream & MLP Fund (NYSE: SMM) provided a summary of unaudited statement of assets and liabilities and announced NAV as of 31 Aug. 2022. Shareholders have already approved the reorganization of the fund w/ and into Salient MLP & Energy Infrastructure Fund, a series of Salient MF Trust, the co. announced 8 Sep. 2022 in an official stmt. 8 Sep. was the last day of trading of fund shares on the NYSE. The fund currently anticipates the reorganization will be completed after mkt close of the NYSE on 13 Sep.

— The Greenbrier Companies, Inc. (NYSE: GBX) announced that the COO for its manufacturing business, William (Bill) Krueger, has been appointed to president of Greenbrier Manufacturing Operations, effective 1 Sep. 2022, the co. announced in an official stmt. Krueger will be responsible for all new railcar manufacturing operations in the US, Mexico, Brazil, Poland, Romania and Turkey, as well as global design, engineering, sourcing, logistics and quality. He will report to Lorie Tekorius, president and CEO.

— B2Gold Corp. (TSX: BTO) (NYSE AMERICAN: BTG) (NSX: B2G) said its BODs declared a cash dividend for the 3Q:22 of $0.04/shr common (or an expected $0.16/shr on an annualized basis), payable on 29 Sep. 2022, to shareholders of record as of 21 Sep., the co. revealed 12 Sep. in an official stmt. 2022. As part of the long-term strategy to maximize shareholder value, B2Gold expects to declare future quarterly dividends at the same level. This dividend is designated as an “eligible dividend” for the purposes of the Income Tax Act (Canada). Dividends paid by B2Gold to shareholders outside Canada (non-resident investors) will be subject to Canadian non-resident withholding taxes.

— Sims Limited named Philip Bainbridge as an independent non-executive director effective 1 Sep. 2022. Bainbridge’s appointment to a casual vacancy on the BODs will be confirmed by shareholders at the 2022 annual general meeting slated for 8 Nov. 2022, the co. announced 1 Sep. in an official stmt. Bainbridge is currently a non-exec director at Beach Energy Limited and Newcrest Mining Limited. He is also the chairman of the Global Carbon Capture and Storage Institute, and Sino Gas and Energy. Bainbridge was previously the chairman of the Papua New Guinea Sustainable Development Program.